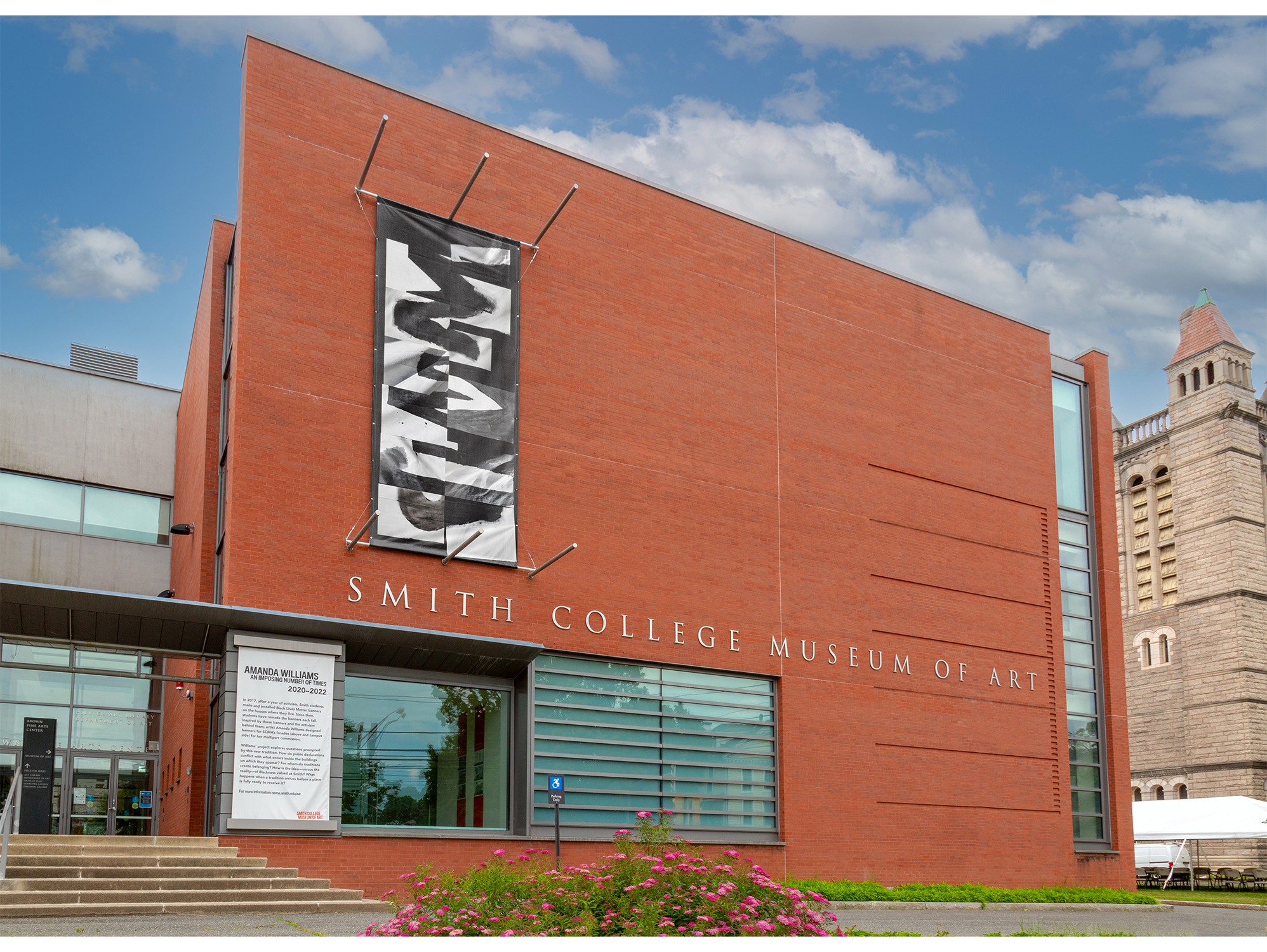 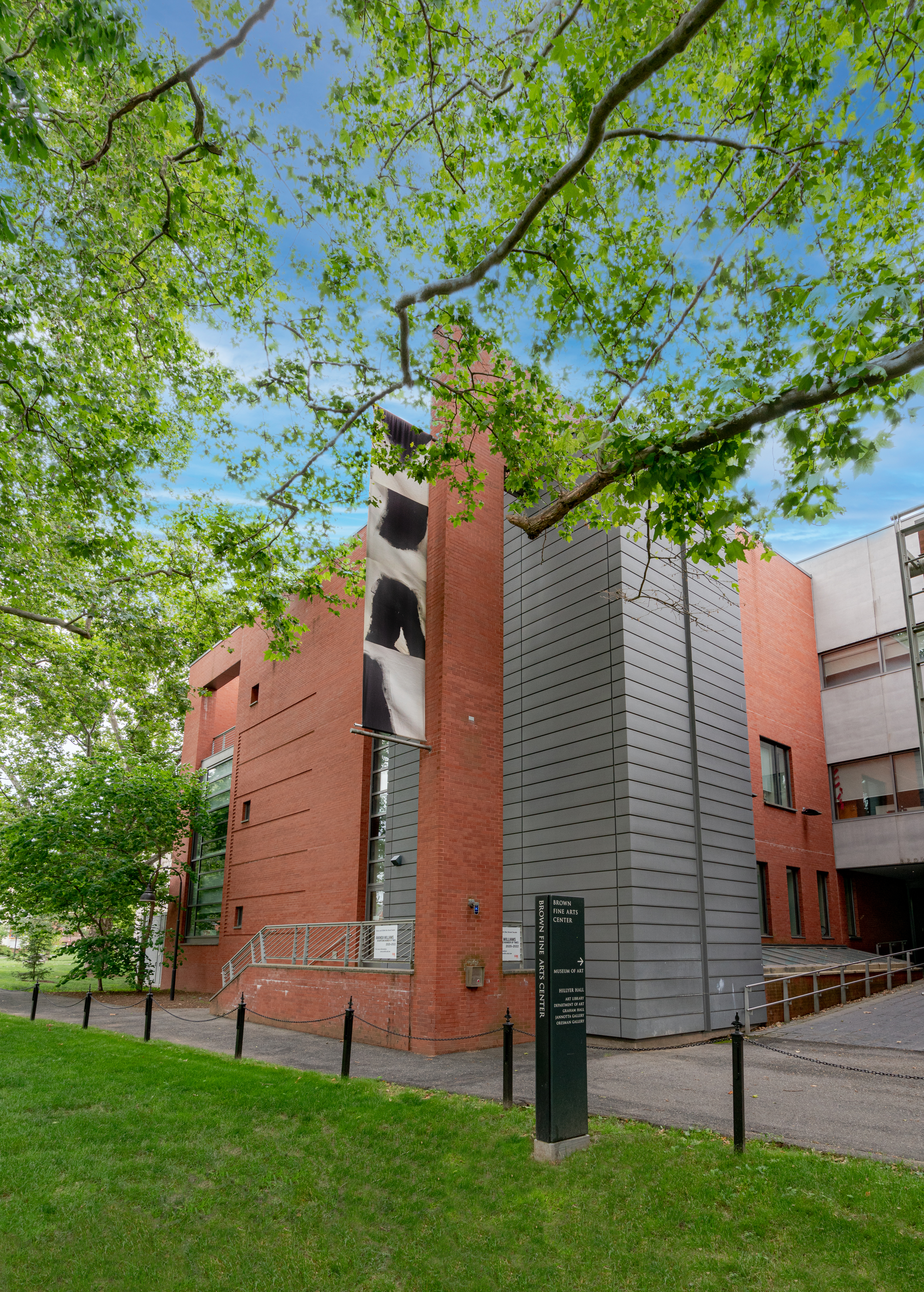 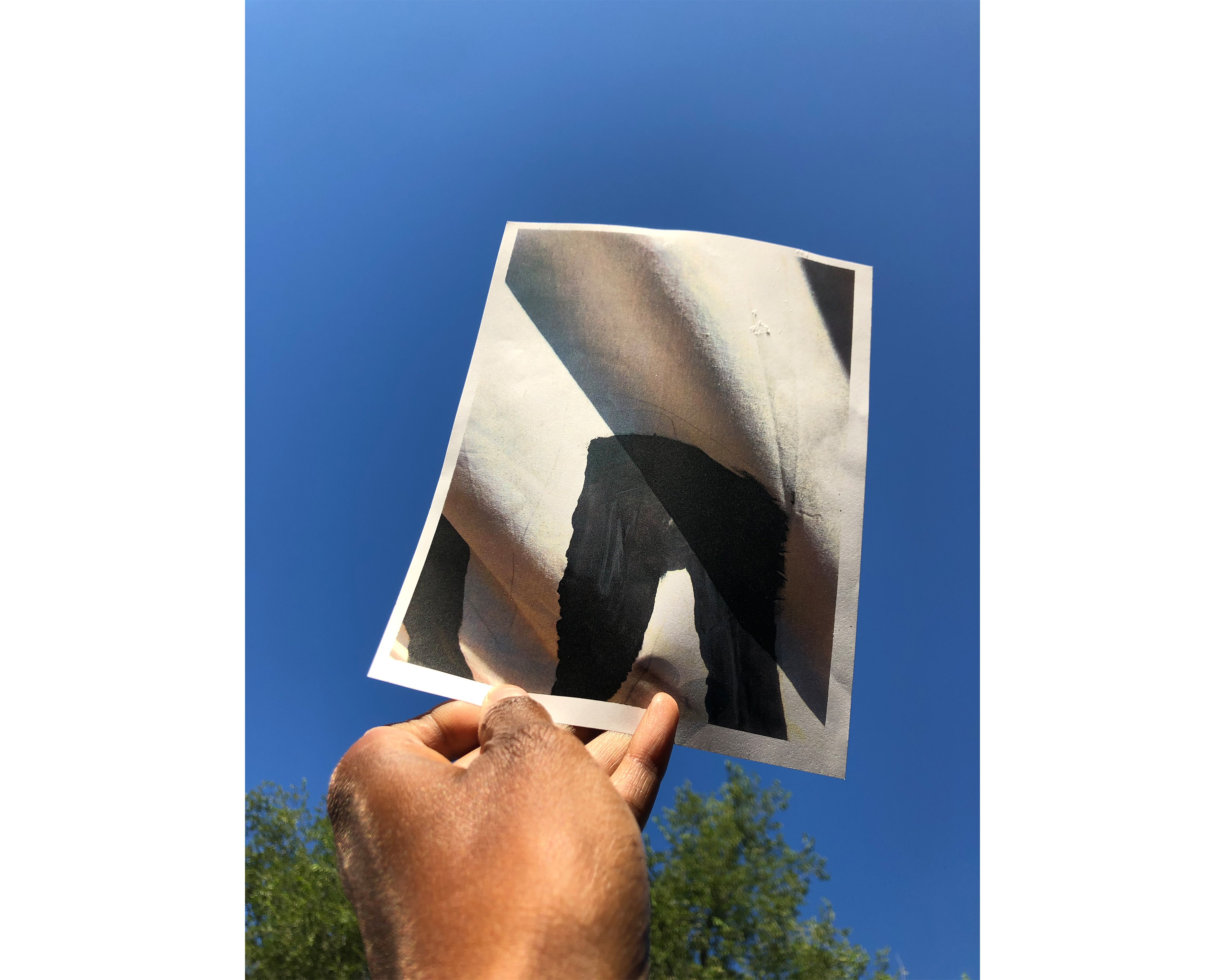 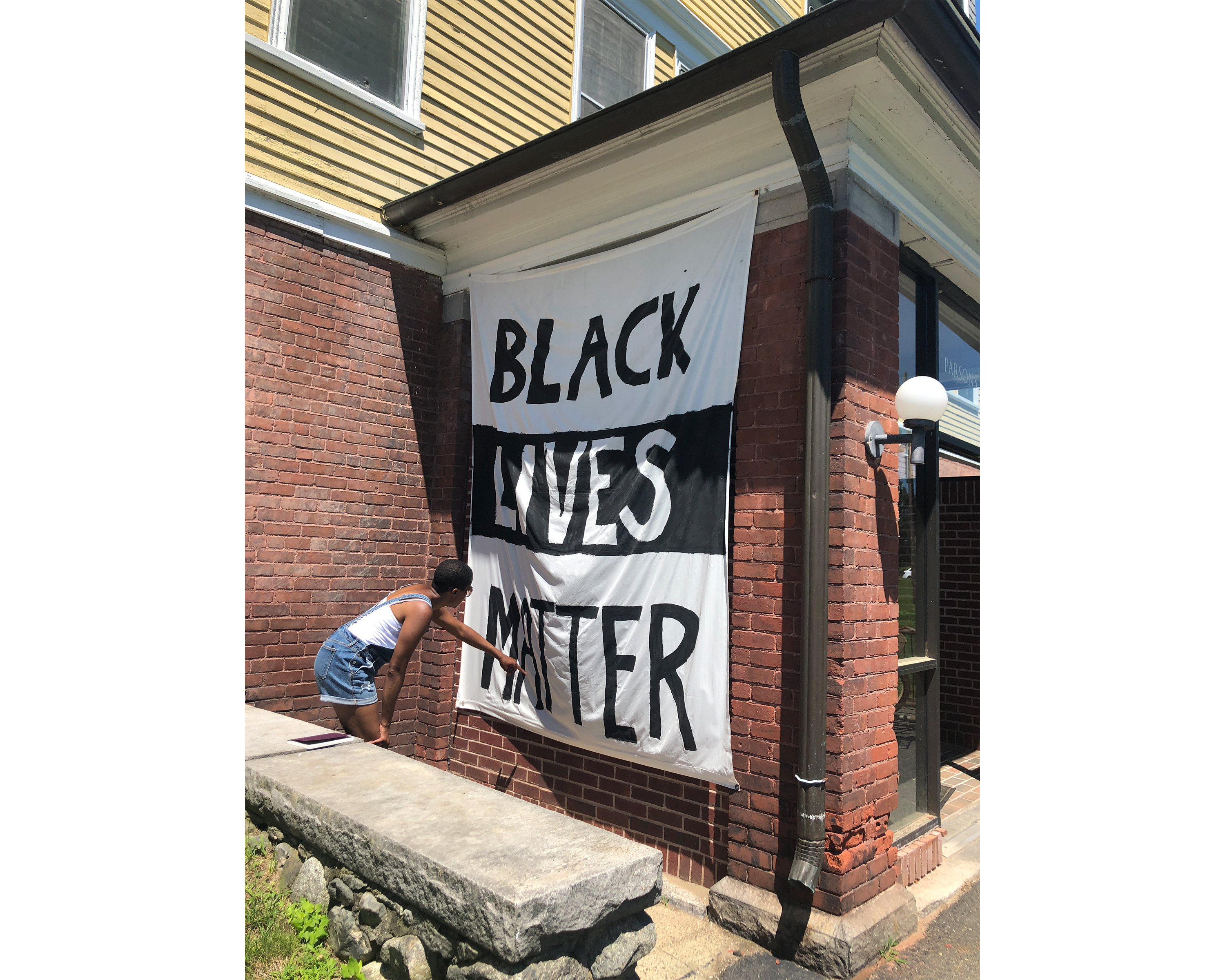 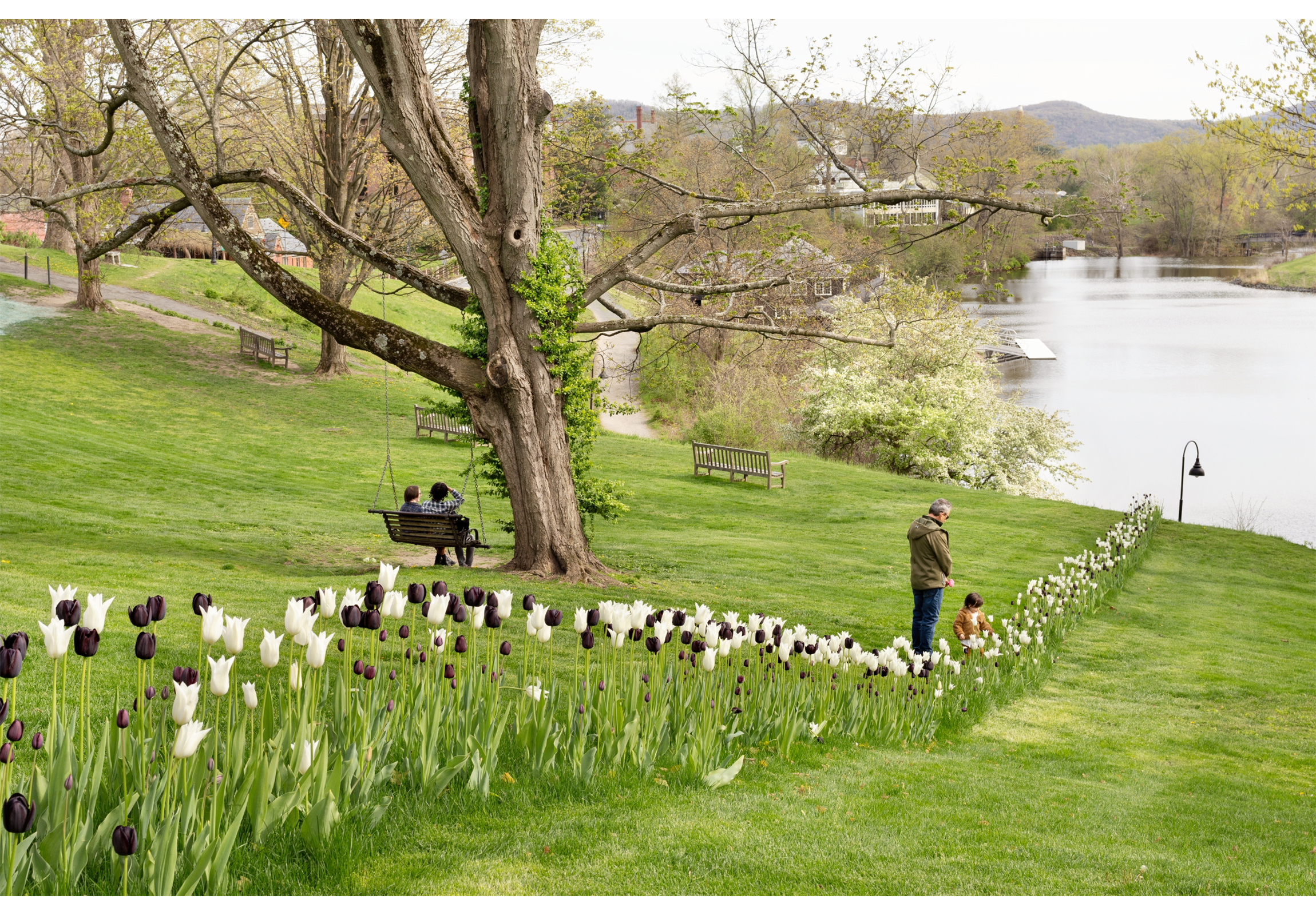 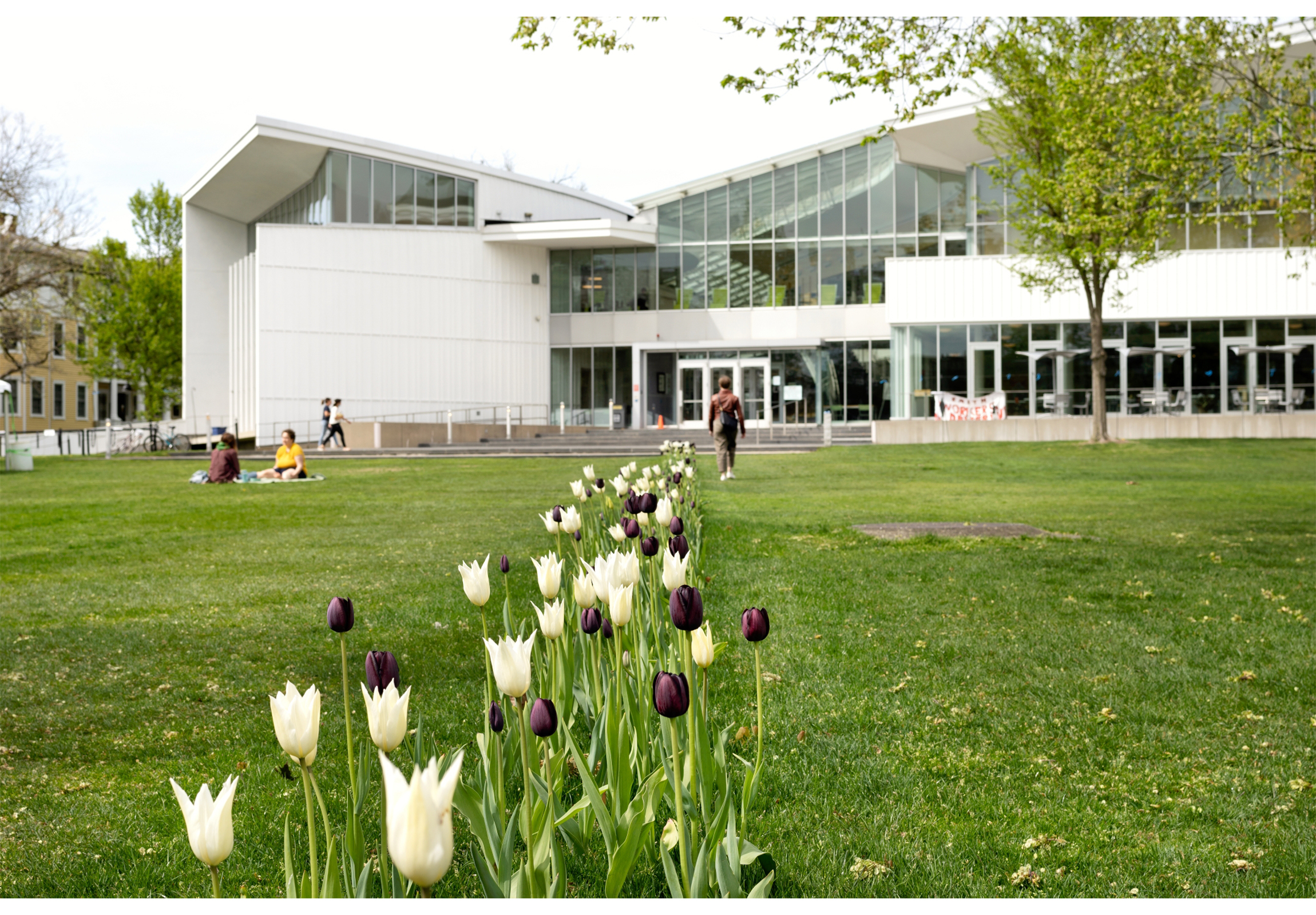 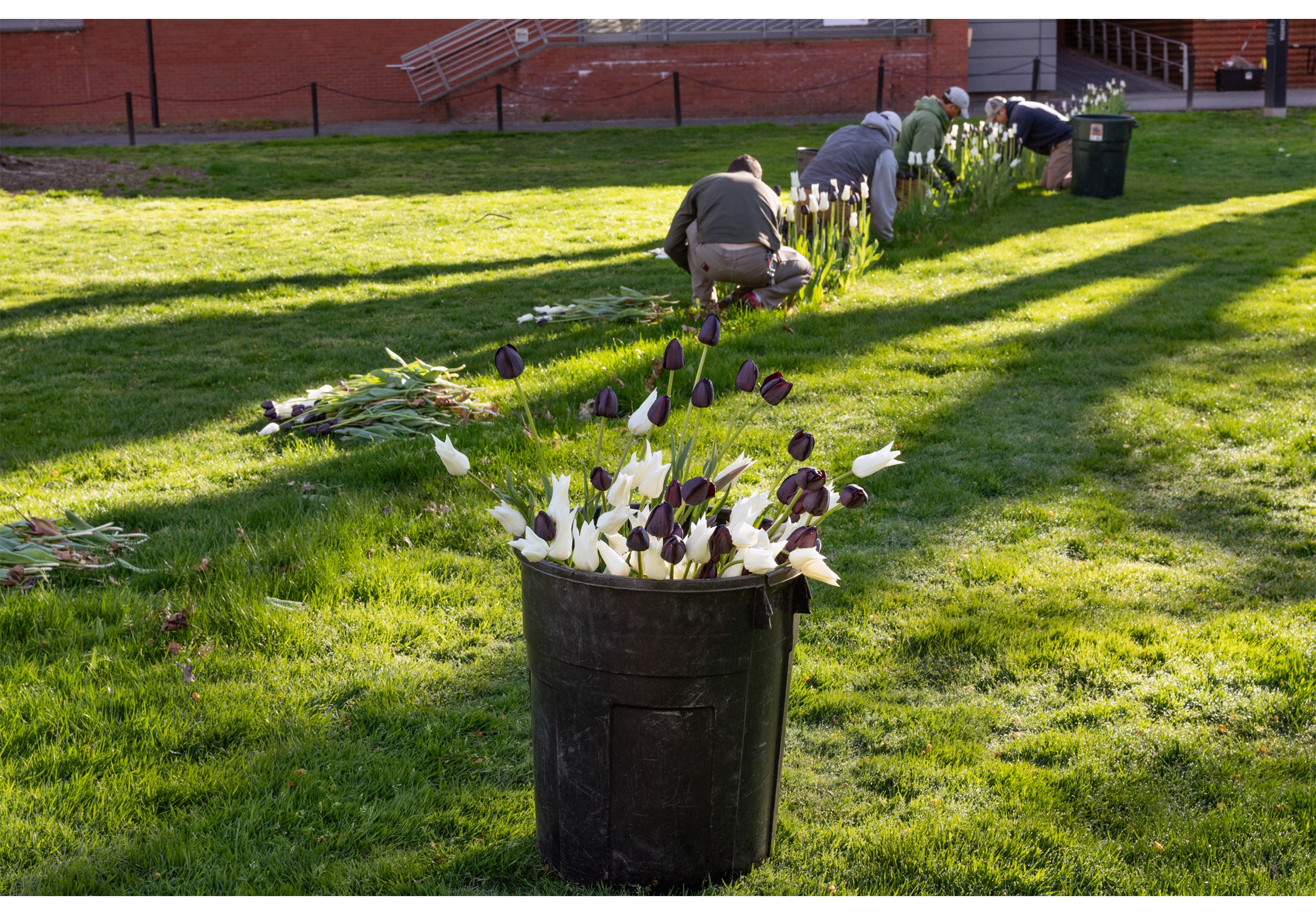 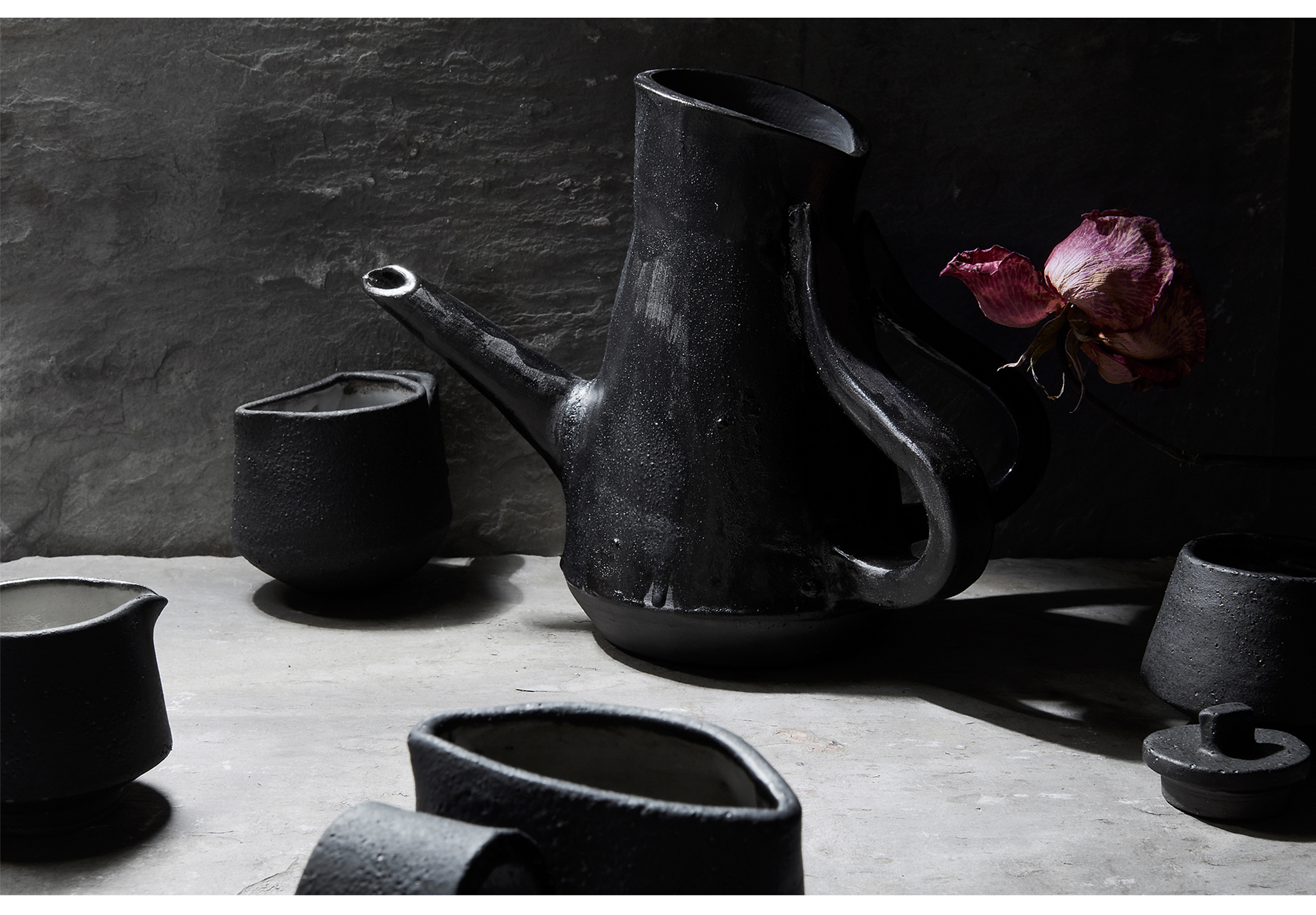 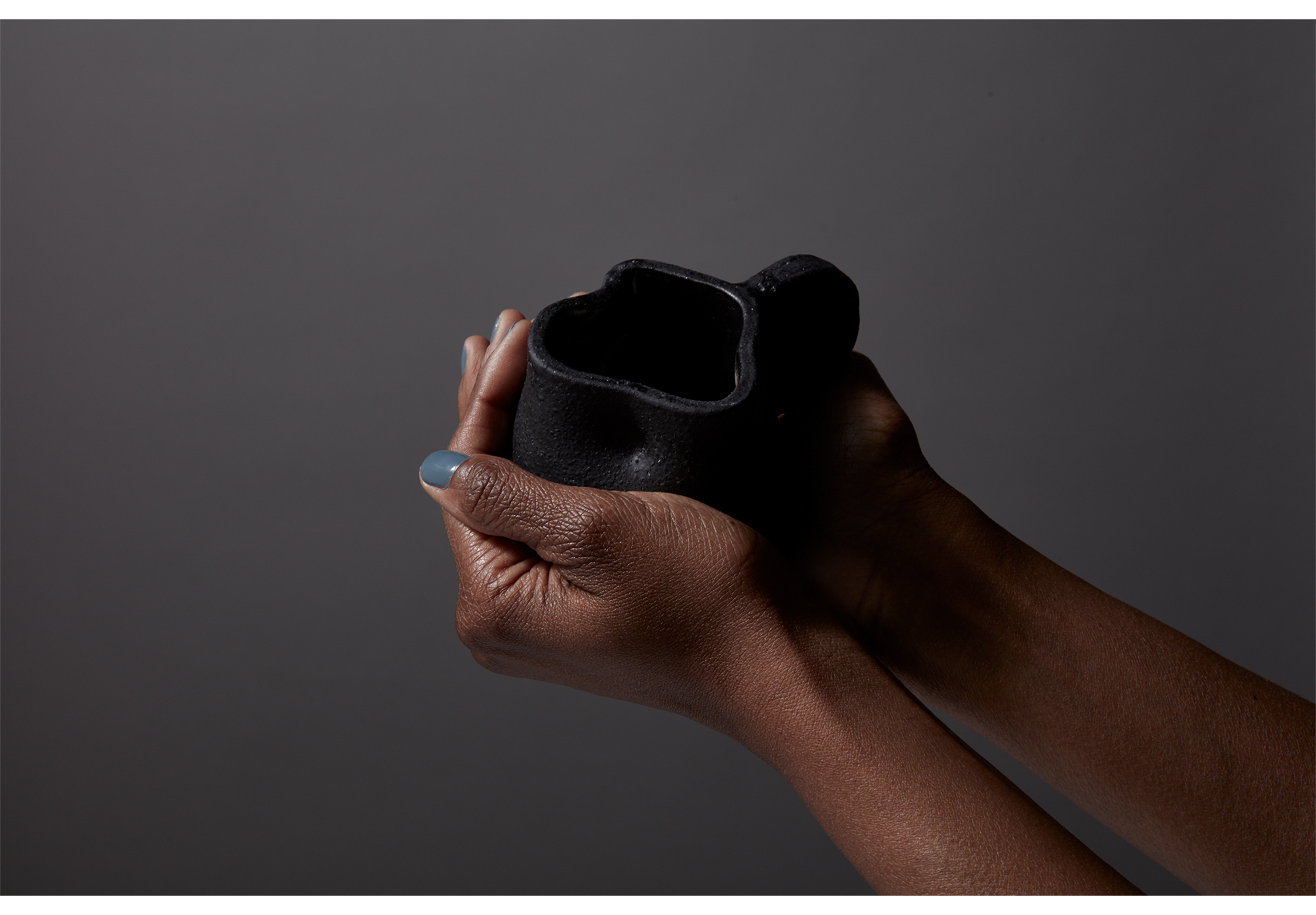 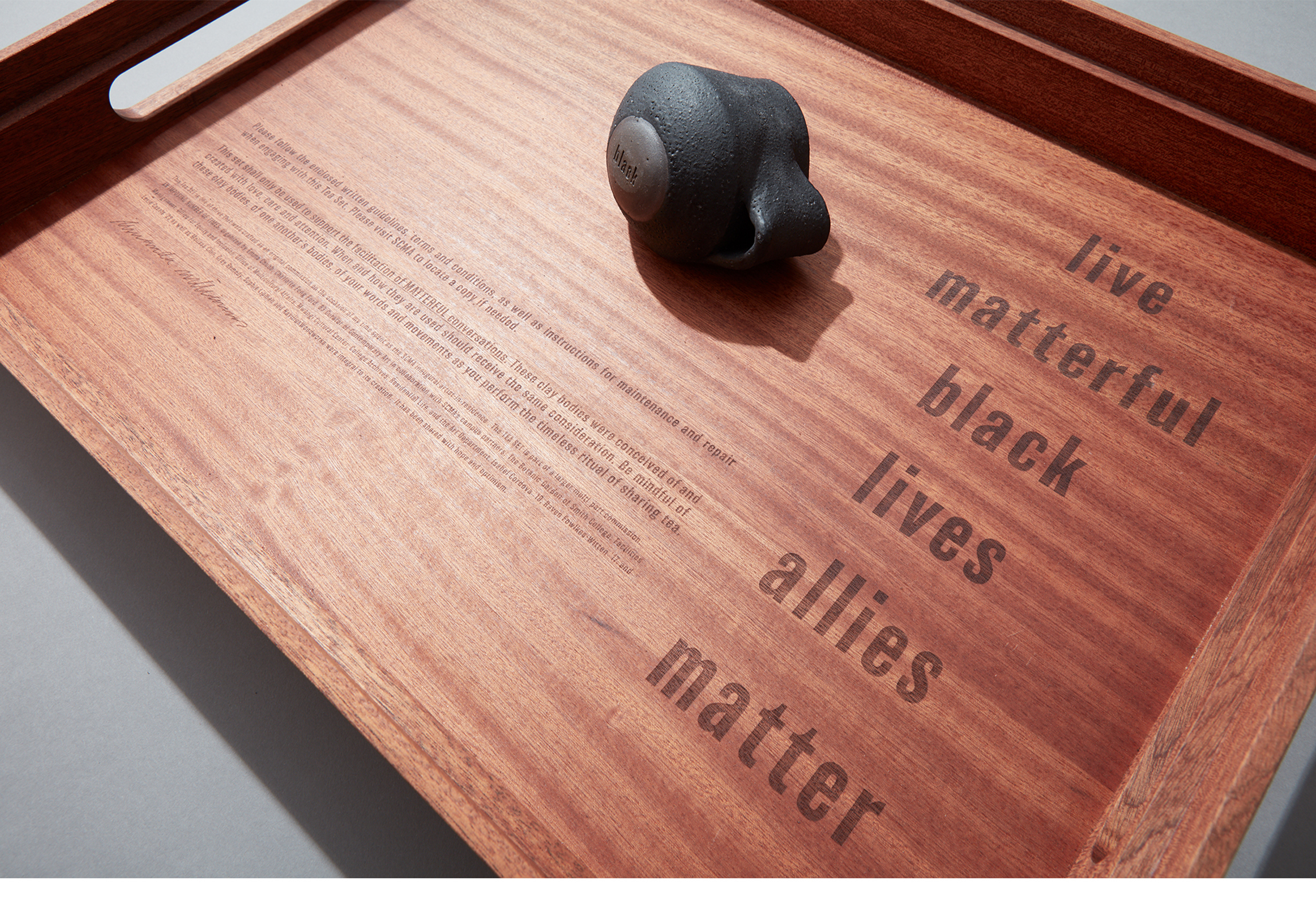 “How do you bring closure to something that lingers? How do you memorialize an injustice that is ongoing?” These are two of the questions that artist Amanda Williams asks with An Imposing Number of Times (2020–22), a multipart, site-specific artwork that explores how campus traditions create and transmit forms of belonging.*

An Imposing Number of Times is rooted in Williams’ summer 2019 stay at Smith College, where she inaugurated SCMA’s Artist-in-Residence Program. During her residency, Williams was drawn to Smith’s Black Lives Matter banners. First created by students in 2017, the banners hang prominently on most of Smith’s residential houses.** All declare BLACK LIVES MATTER on white, twin-sized bed sheets suspended vertically on the house facades. Despite their shared message and materials, each banner remains unique in its execution and state of care.

The house banners prompted Williams to reflect on language and self-determination at Smith, a place where campus traditions and the house system play a large role in student life. How is blackness navigated and valued at Smith? How do public declarations like outdoor banners relate to what occurs inside the buildings they adorn?

An Imposing Number of Times unfolded in three parts over a two-year period. In November 2020, Smith staff installed banners designed by Williams on two of SCMA’s facades (Elm Street and Neilson/Seelye lawn).  To design the banners, Williams digitally collaged together details from photographs she took in 2019 of the student-made banners. Williams’ banners adopt and refract the visual language of the house banners in order to test the limits of their legibility.

The second component is an edition of three Matterful Black Lives Tea Sets. A reference to Smith’s tradition of Friday afternoon tea, the sets were made by Williams in collaboration with ceramicist Melissa J. Chin of Grey Remedy. Williams once again referenced the student-made banners, this time employing the banners’ painterly gestures as she hand painted the interior of each cup with glaze. In November 2021, SCMA staff worked with Williams to install one set in the museum’s third floor galleries; the other two are for permanent use at the Mwangi Cultural Center and the President’s House.

The final component of the commission is an ephemeral constructed landscape of black and white tulips that considers desired or remembered paths. On  November 1, 2021, Smith College and Campus School students, staff, faculty, and other visitors to campus joined Williams for a day-long bulb planting event organized in collaboration with the Botanic Garden of Smith College. Over six hours, they planted nearly 4,000 tulip bulbs along three remembered or desired paths that traversed the lawns between the Campus Center and Wright Hall, SCMA and Neilson Library, and Happy Chace ’28 Garden and Paradise Pond. Williams selected a blend of white and black tulips in another reference to the palette of the house banners.

Under banners, alongside tulips, and over tea, An Imposing Number of Times extends an invitation to, in Williams’ words, “(re)infuse power into a phrase like ‘Black Lives Matter’ that was indirectly rendered powerless by its unplanned and ubiquitous insertion in an environment that wasn’t wholly ready to receive it.”

Based in Chicago, Amanda Williams is a distinguished visual artist whose creative practice employs color as a way to draw attention to the political complexities of race, place and value in cities. Her installations, paintings and works on paper seek to inspire new ways of looking at the familiar and in the process, raise questions about the state of urban space and citizenship in America. Williams launched SCMA’s Artist-in-Residence Program in summer 2019.

January 21, 2021
One of my favorite pairings from 'SCMA Then\Now\Next' is separated by nearly five centuries: a Cubist painting by Picasso and a small Renaissance panel painting.
About the Artist 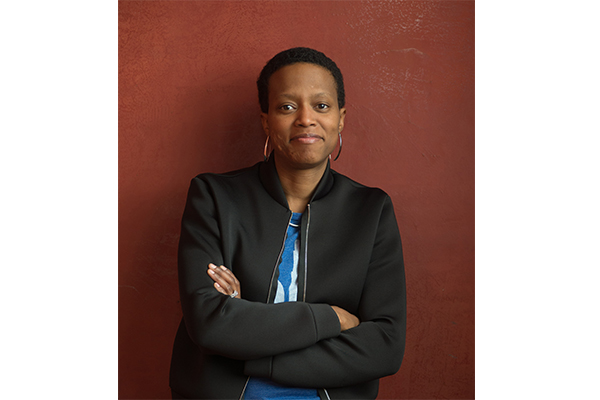 Amanda Williams is a visual artist who trained as an architect. Her creative practice employs color as a way to draw attention to the complexities of how race shapes how we assign value to space in cities. The landscapes in which she operates are the visual residue of the invisible policies and forces that have misshapen most major US cities. Williams’ installations, paintings and works on paper seek to inspire new ways of looking at the familiar and in the process, raise questions about the state of urban space and ownership in America. Amanda has exhibited widely, including the MoMA (NY), the Venice Architecture Biennale, the MCA Chicago, and a public commission at the Pulitzer Arts Foundation in St. Louis. She recently won the commission to design a permanent monument to Shirley Chisholm in Brooklyn, NY. Amanda has been recognized as a Joan Mitchell Foundation grantee, a USA Ford Fellow, an Efroymson Arts Fellow and a Leadership Greater Chicago Fellow. Amanda is also a member of the Obama Presidential Center's Museum Design Team and sits on the boards of the Graham Foundation, Garfield Park Conservatory and Hyde Park Art Center. Her work is in several permanent collections including the Art Institute of Chicago and the MoMA (NY). Williams lives and works on the south side of Chicago. 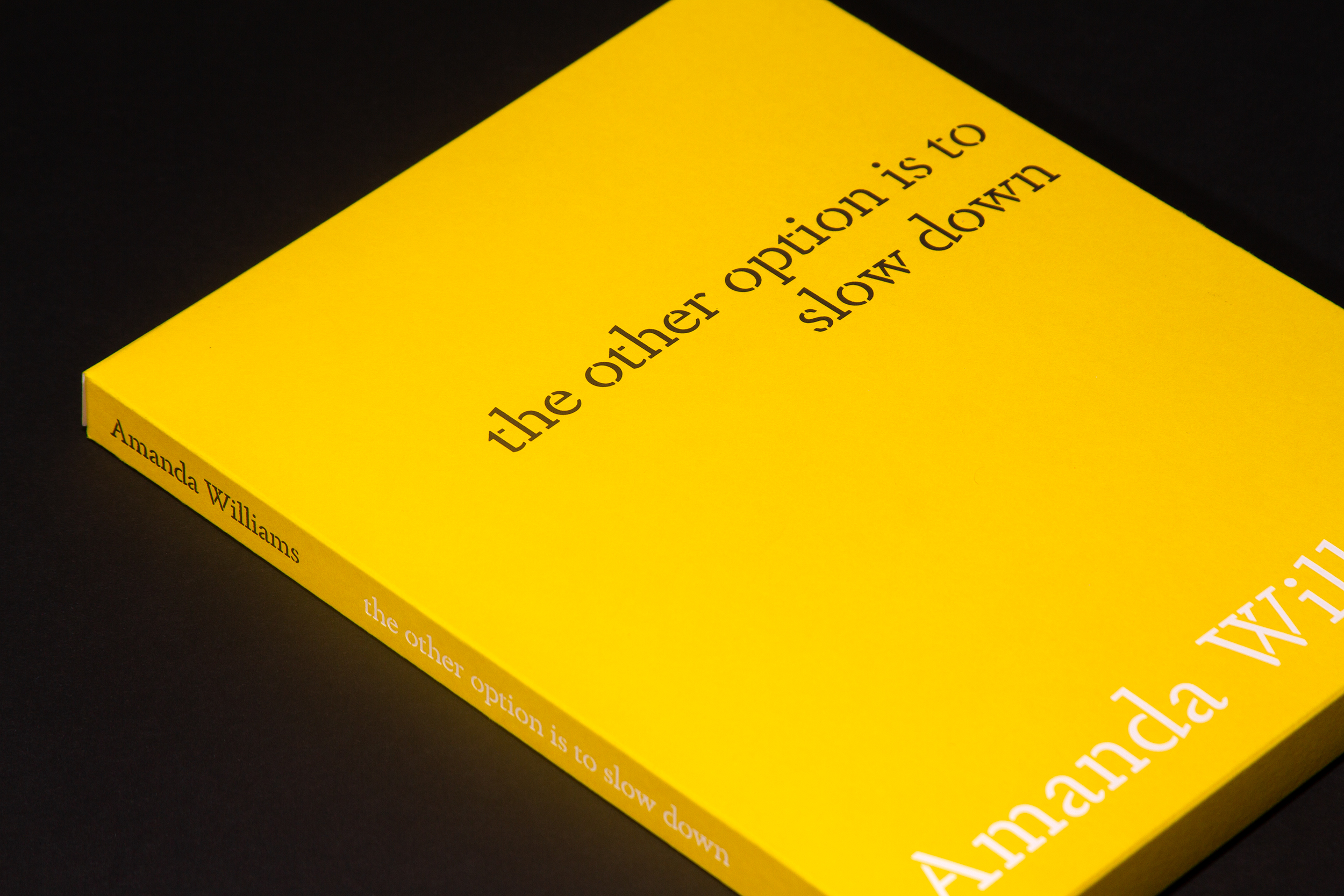 In collaboration with Amanda Williams and Candor Arts, SCMA is co-publishing a limited edition artist book about Williams’ 2019 artist residency at Smith College. Designed by Matt Austin and Melanie Bohrer, it includes essays by Emma Chubb and Grace Deveney and is only available for purchase from the SCMA shop and Candor Arts.

Click to purchase the book from the Museum Shop.

The residency, commission, and publication are made possible by the trust and support of Robin Bracken Villa '65; the bequest of Jane Herb Rinden in honor of Thor Rinden; the Maxine Weil Kunstadter, class of 1924, Fund; and the Carlyn Steiner '67 and George Steiner Endowed Fund in honor of Joan Smith Koch.