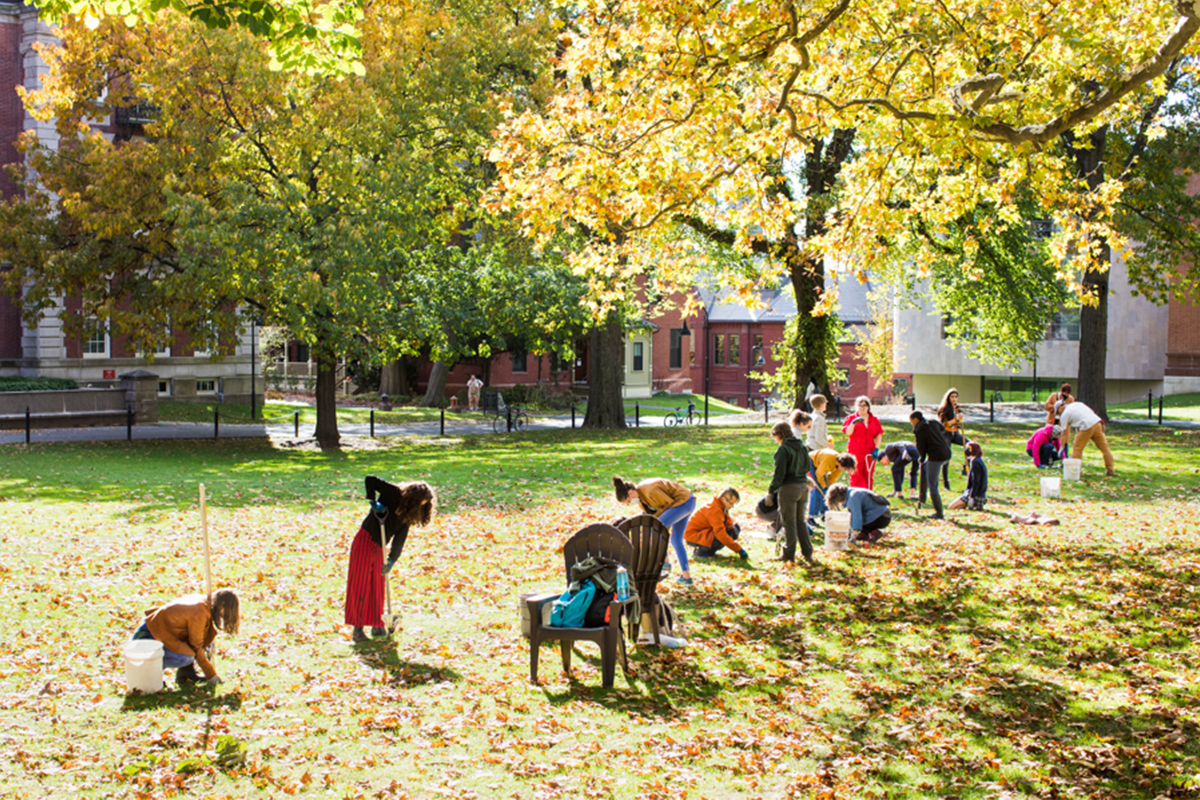 In this post, Brooklyn Quallen '25 discusses her experience planting tulips for An Imposing Number of Times (2020-2022), a newly commissioned artwork by Amanda Williams. Brooklyn is a STRIDE scholar currently working with Emma Chubb, Charlotte Feng Ford ’83 Curator of Contemporary Art.

What makes something valuable? Inspired by tulips, which are widely considered to have caused the first financial bubble in the 17th century, the third part of Amanda Williams’s site-specific installation, An Imposing Number of Times, asks Smith students to consider that question as they walk around campus and engage with the approximately 3,600 tulips planted by staff, students, faculty, volunteers, and Williams herself. The tulips were planted along “desire paths” on Chapin Lawn, Seelye Lawn, and Happy Chace ’23  Garden. A desire path results from people taking shortcuts off of paved pathways. The more they are used, the more visible they become. Williams used tulips to mark them, with the hope of bringing them into student consciousness and inspiring discussion. The tulips will bloom once in the spring of 2022. After that, the bulbs will be pulled so that they cannot flower again.

As a student employee at SCMA, I was able to directly participate in planting the installation. I was one of many who helped to plant bulbs at the three sites. We received very specific instructions: along a path divided into 24 by 18 inch rectangles, there were to be 15 tulip bulbs randomly placed and planted. Each path was laid by Williams and John Berryhill, Landscape Curator, with a rope. Williams wanted them to be as straight as possible, but they curved at points around various obstacles to reflect how students actually navigated the individual desire paths. At one point on Seelye Lawn, the path actually had to wind around a mechanical element in the ground.

Starting at 8:30 in the morning until about 3:00 in the afternoon, volunteers, including 6th graders from the Campus School, planted tulips with metal bulb planters. By the time I arrived at 9:15, a few were bent and broken, but we kept going. Shoutout to Ben Green from the Botanic Gardens for fixing the handles that we snapped off! Each hole had to be individually dug. A volunteer would push the planter down into the soil, sometimes jumping on it or giving it a good kick to get it down to the requisite four inches, take the plug out of the ground, and put the tulip bulb in the hole. Often, there were worms. They would then push the plug out of the bulb planter with a stick, take the grass off so that the tulip would be able to sprout more easily, and pack the dirt back down. We did this almost 4,000 times.

Some people worked alone, digging, planting, and packing. Some worked in pairs, with one person digging and the other planting. I worked in a trio for a while with two staff members from the Office of Institutional Research. Minh Ly dug the holes, Liz Kamerer pushed the plug out with a stick, and I planted the bulb. We were pretty efficient, and had some great conversations about my prospective major, too!

That communication was one of the best parts of the planting experience. Even people who planted alone were not actually alone. They talked to those who planted near them, to museum staff, student volunteers, and Williams herself. They asked questions and collaborated and compared tips on how to best get the planter through four inches of hard, rocky soil. As a first-year student, it was inspiring to see the whole Smith community come out and engage with the campus. Part of Williams’ intentions with this project was to inspire conversations, and she definitely succeeded.

This project has also made me more aware of how I interact with space on campus. When I cut across the lawn because I’m running late to class, or because it’s cold and I want to get into Neilson sooner rather than later, or because I saw someone I know, I think about the tulip bulbs under the ground and try not to trample them. Then I think about how else I might be affecting the space I inhabit on campus. It’s an interesting question to think about, especially when put in a broader social context, outside of tulips and grass and worms. Am I helping to plant tulips with my community, or am I stepping on other people’s work and effort? That’s a question that the whole Smith community should consider when the tulips bloom in the spring.