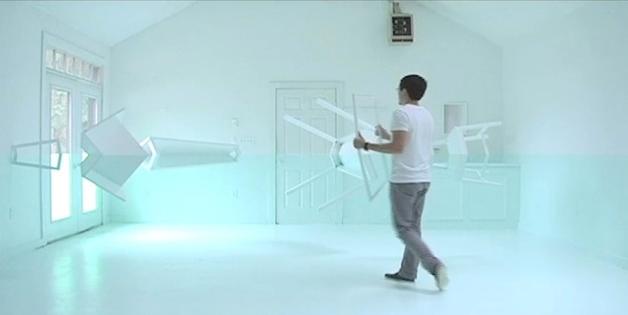 With wit and humor, Kyung Woo Han challenges the assumption that video is an artistic medium of faithfully representing truth. He painstakingly constructs trompe-l’oeil (French phrase for “deceives the eye”) environments, and then deconstructs them for the camera. In Green Room, pieces of furniture seem to float in a flooded room. When Han enters and removes the “furniture” piece by piece, the optical illusion is exposed. The room is dry, partially painted a light green to create the impression of water. The floating “tables” and “chairs” are actually suspended sculptures, which the artist has constructed with bent and skewed angles to mimic the effect of refraction in water. Each time Han leaves the room with an object, the illusion of a flooded room reasserts itself, foiled when he re-enters.

My work deals with perception and optics.

All the facts are relevant. One fact can be interpreted in several ways depending on our perception, and from opposite views, two different facts can look the same.

Humans have an instinctive fear of not knowing. Whatever it is, we feel assured when [it fits] within a comprehensible boundary.

This “seeing” behavior plays a very important role in my work. I want to show the reality that the world can only be interpreted [from] a subjective point of view, and it is impossible to maintain objectivity.