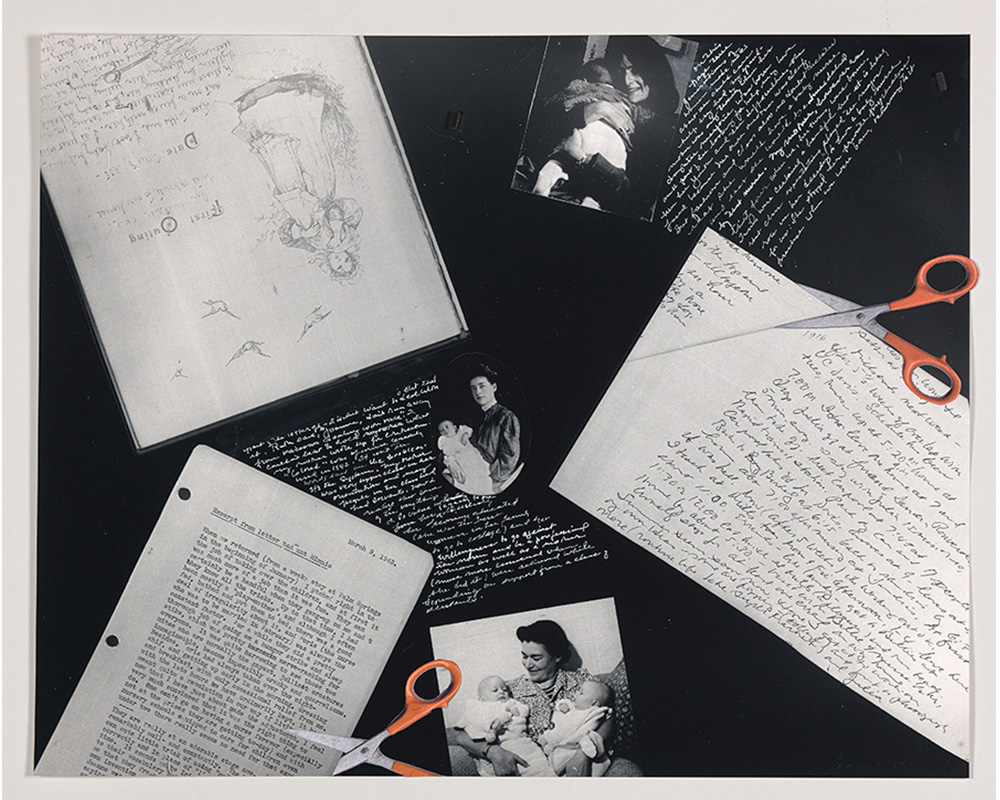 About That Narrative: Joanne Leonard

Lexie Casais ‘23 is a STRIDE scholar working with curator Emma Chubb. About That Narrative is a three-part blog series in which Lexie discusses themes of remembrance, recollection, and storytelling in artworks from SCMA’s centennial exhibition, Then\Now\Next.

Although memory has long interested Joanne Leonard, it became a key concept in her artistic practice when her mother was diagnosed with Alzheimer’s disease. Following the diagnosis, Leonard created Not Losing Her Memory, a series of photo-based collages to which SCMA’s Day Care Documents belongs. In the piece, Leonard layers letters and photographs from her life with materials she collected from her mother and grandmother. All of these “documents” date to right after each woman’s first child was born and thus to their transition into motherhood.

As a medium, collage allows artists to break apart their materials and juxtapose images from different sources and time periods. Leonard writes, “when I create photo collage, I fragment the original photographic ‘truths’ by rearranging sentences, layering images in space and time” [1]. Day Care Documents is a prime example of this layering: Leonard abandons a chronological narrative in favor of a seemingly random ordering of events. The letters and photographs date to specific moments in a family’s history, but it is unclear whether the photographs are placed next to letters written by the sitters or whether Leonard mixes and matches them. Leonard further plays with time by employing different technologies of communication and photography, such as letters written on a typewriter and letters written by hand and both film and digital photography.

This ability to manipulate materials may have come as a relief to Leonard, who felt burdened, as the artist of the family, with finding a meaningful way to preserve the details of her family’s past before her mother lost those memories. This task puts a lot of pressure on the artist: what if the records kept don’t tell the real story, or the full one? Leonard’s interest in questioning photographic “truths” might serve as a way to tell a more accurate version of her family’s story by fracturing the materials at hand.

Despite—or perhaps because of—its fragmentation, Day Care Documents depicts motherhood more honestly than most narratives. I think many parents would agree that having children feels like a disruptive experience that throws life into chaos. One might later look back on those memories as a linear story, but it doesn’t mean it feels linear in the moment. For some people, having a child also recalls memories from one’s own childhood and brings them to reconsider relationships with family members. Leonard’s juxtaposition of old and new documents mirrors this experience, layering her family’s past struggles, detailed in the letters she collages, over one another.

For me, the most striking visual elements of Day Care Documents are the red scissors that cut across two of the letters, indicating the artist’s hand in the fracturing of the narrative. Critic Tavia Nyong’o argues that “any act of recollection branches off in all directions, foiling any effort to cohere the narrative of the past into a single, stable, and linear story” [2]. The scissors may represent this “branching off in all directions”; every time Leonard tries to use one document to create a comprehensive description of the past, she veers off-track, getting caught up in all different periods in the family’s history. However, scissors also imply control over which pieces of the story get cut and where each piece goes. Perhaps Day Care Documents serves as a way for Leonard to take ownership over her family’s past, even in all of its messy, fragmented iterations.