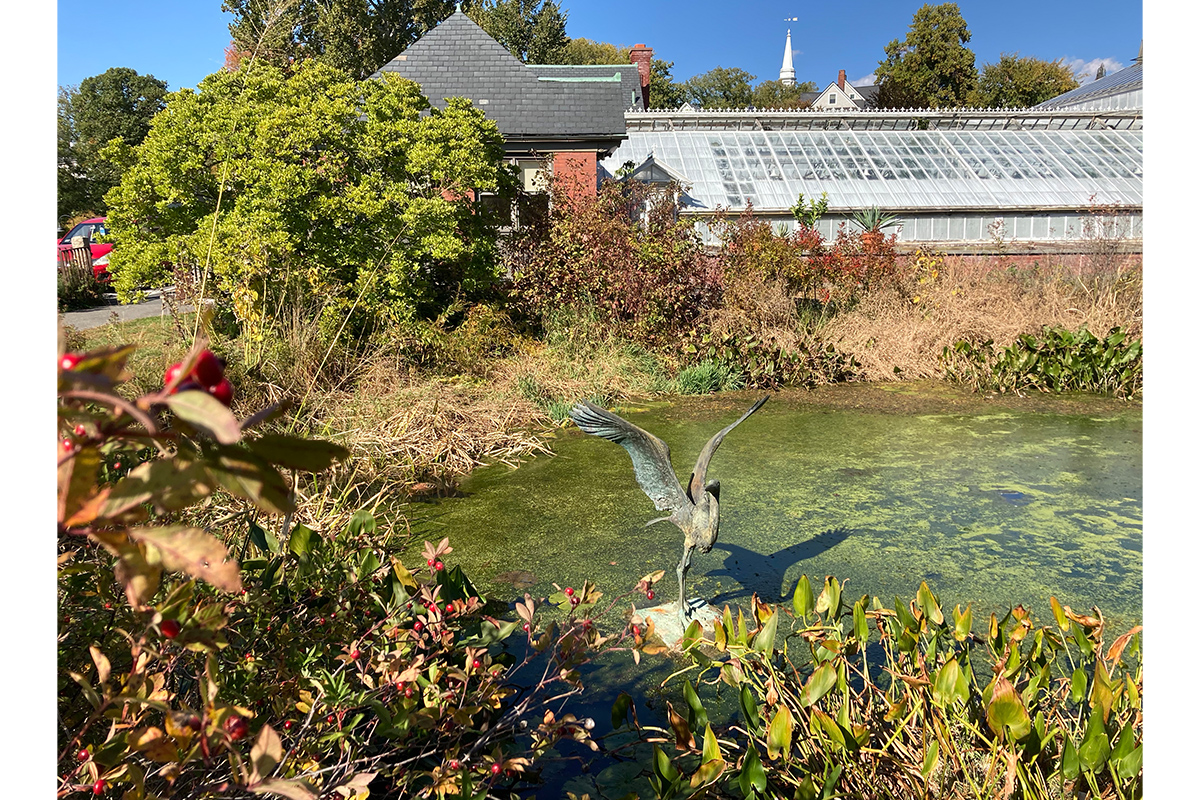 Beyond the Museum: Art on Smith's Campus

Since the beginning of the 2020-21 academic year, SCMA has been collaborating with the Spatial Analysis Lab to create an interactive map of artworks around Smith’s campus. The map, titled Beyond the Museum: Art on Smith’s Campus, is now available for public use!

Hannah and Lexie began working together on this project in September 2020 and recently met over Zoom to reflect on the process. Read their conversation about the map below, and check out Hannah's writing about the project here.

Lexie Casais (LC): First of all, thanks so much for meeting up with me to talk about the map. It was really lovely to work with you this year.

LC: I think it would be great to start by sharing what our roles were for this project. Can you tell me how you first got involved and what you contributed to the map?

HD: I work as a student assistant at the Spatial Analysis Lab (SAL) with Jon Caris and Tracy Tien. They got an email from SCMA asking if they could help make a map, and Jon and Tracy thought that this would be a great project for me. This was early in the fall 2020 semester, and I’ve been working on the map since then. My main role was to make the map itself, as well as to decide how I wanted to visually represent and organize the different artworks. I was really excited because I’d never done a big Story Map project before.

LC: Can you tell me what Story Map is, for people who don’t know?

HD: Story Map is an extension of ArcGIS, which is a mapping software. The basic idea behind the Story Map software is to combine mapping with text and pictures to create a more well-rounded presentation of your ideas. It really helps you tell a contextual and interactive story.
How did you first get involved in the project?

LC: I’ve been working as a research assistant to Emma [Chubb, Charlotte Feng Ford ’83 Curator of Contemporary Art at SCMA] since fall 2019. In spring and summer 2020, I heard a little bit about how Emma wanted to make a map of outdoor artworks on Smith’s campus, since SCMA had just closed to the public due to COVID-19. Over summer 2020, Emma and Gina [Hall, Educator for School & Family Programs at SCMA] started thinking about ways to make the map. By the time I returned to work in fall 2020, Emma (along with Danielle Carrabino, Curator of Painting & Sculpture; Yonatan Levia, UMass Amherst MA ’21; and Matthew Blanchard, UMass Amherst MA ’21) had already written descriptive labels for many of the artworks on the map.

My first job was to write the rest of the labels. I wrote the text for the three Elliot Offner pieces (Bittern Mother and Child, Felicitous Filly, and Great Blue Heron), as well as Helaman Ferguson’s The Aperiodic Penrose Torus Alpha. These labels are really important because they give users of the map a better understanding of who the artist is and, in many cases, how the artwork is connected to the Smith community. For example, Helaman Ferguson’s sculpture, The Aperiodic Penrose Torus Alpha, was made in collaboration with Marjorie Senechal, Smith’s Louise Wolff Kahn Professor Emerita in Mathematics and History of Science and Technology.

After finishing the labels, I wrote the alternative text for all of the images on the map to improve accessibility. For each artwork, I also created lists of related artworks in SCMA’s collection, which are located at the bottom of the labels for each piece on the map. That’s another great tool for people who want to learn more about how these pieces connect to other works in SCMA’s collection. 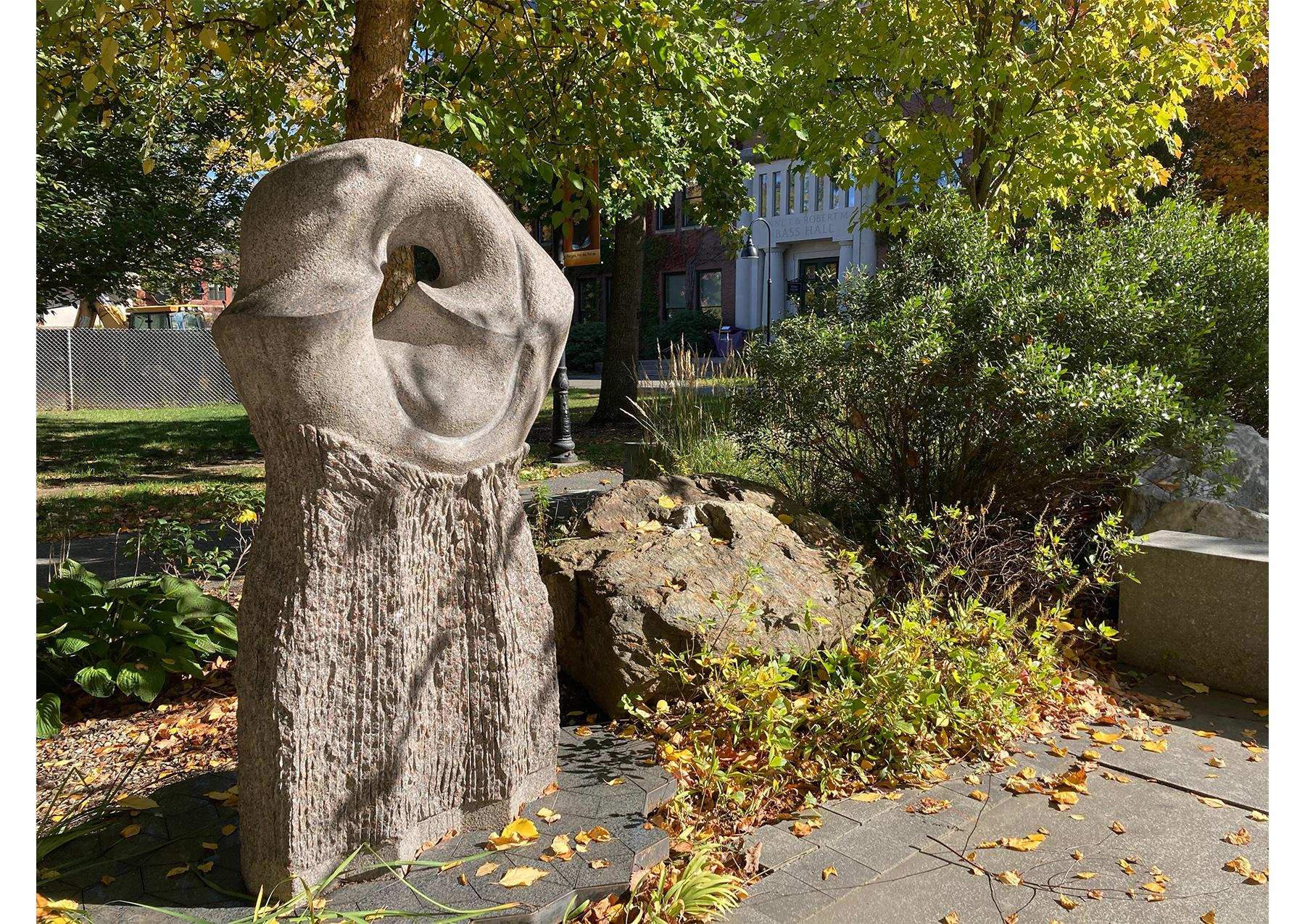 LC: Do you have any different conceptions of art and museums after working on this project? I’d be interested to hear what your involvement was with SCMA prior to this project, and how that’s changed now.

HD: I had been to SCMA a handful of times before working on this project. I went to Night at Your Museum with my friends, and when I toured Smith in high school, my parents and I went to the museum. I had also gone a couple of times for my environmental science classes.

Before this project, though, I had never really thought about any of the art outside of the museum. When we were working on the map, I realized that I pass by these things all of the time, and I just hadn’t recognized that they were pieces of art. For example, I walk past the Great Blue Heron statue all the time, but I never really thought about the fact that it’s a piece of art that someone made and had a purpose for. I’ve always enjoyed going to SCMA, but it’s definitely cool to think about it now as not just the building, but the whole campus. 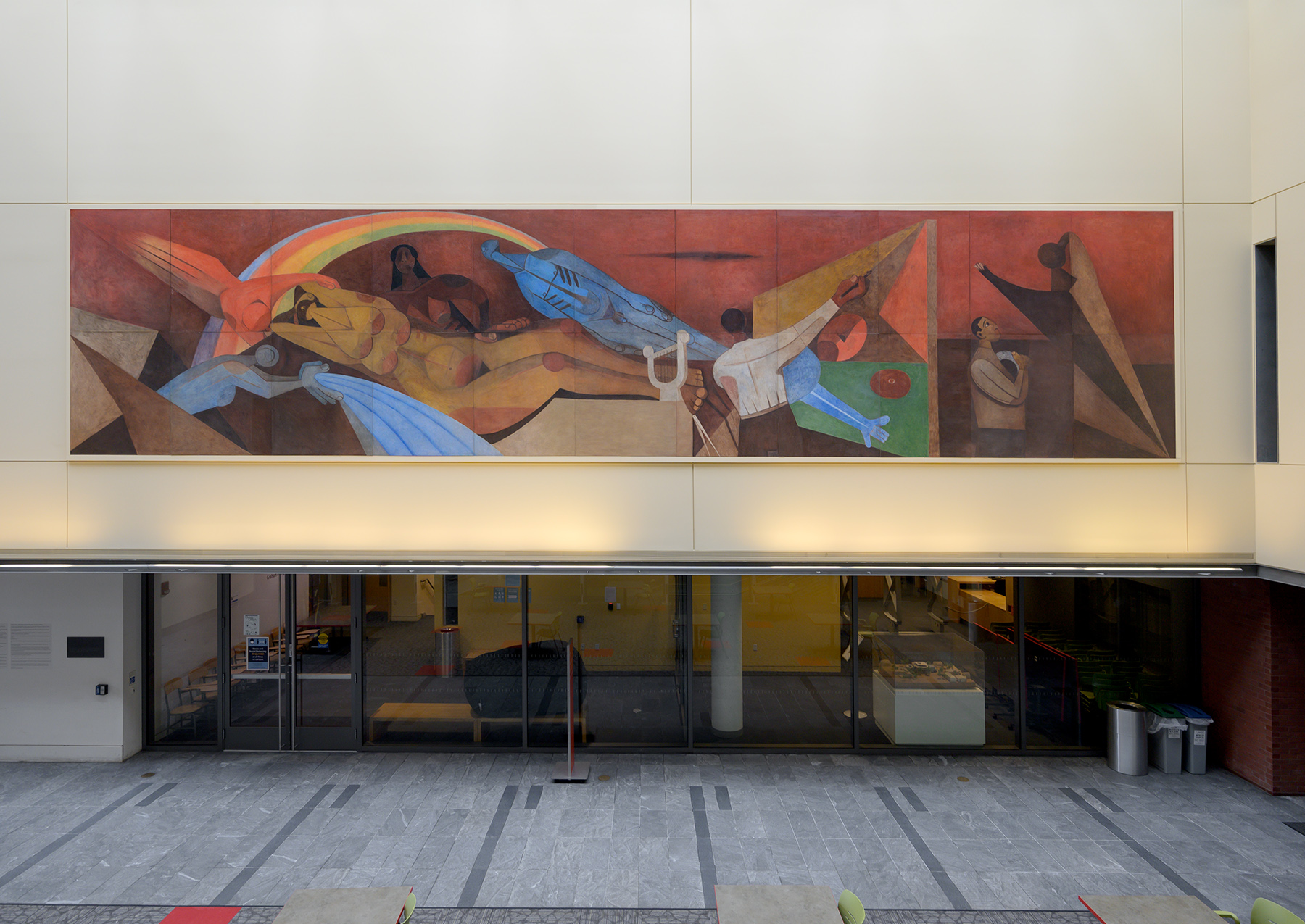 LC: I had a similar experience in terms of outdoor art. I definitely thought about some of the pieces that are around campus but closer to the museum, like the Rufino Tamayo fresco that’s in the Brown Fine Arts Center Atrium. But with, for example, the Sol LeWitt wall drawing that’s in Burton Hall, I had no idea that it even existed because I’ve never taken a class in Burton. I had gone to other museums to see Sol LeWitt’s wall drawings, and I didn’t even know that we had one right here! That was crazy to me.

HD: Same here! It’s funny because my first year, I had calculus tutoring in the room next to the Sol LeWitt wall drawing. I’d pass by it and think, “Oh, that’s a cool wall.” But I appreciate it much more now that I know it’s a work of art.

LC: And students helped install it, too! The way that Sol LeWitt’s wall drawings work is that the “artwork” in a museum’s collection is the instructions for installing it. When the museum wants to display the piece, a representative from the LeWitt studio comes to install the work, often with the help of museum staff or community members. At Smith, students participated in installing the wall drawing back in 2013. I think that’s so cool and I can’t believe I didn’t know that. 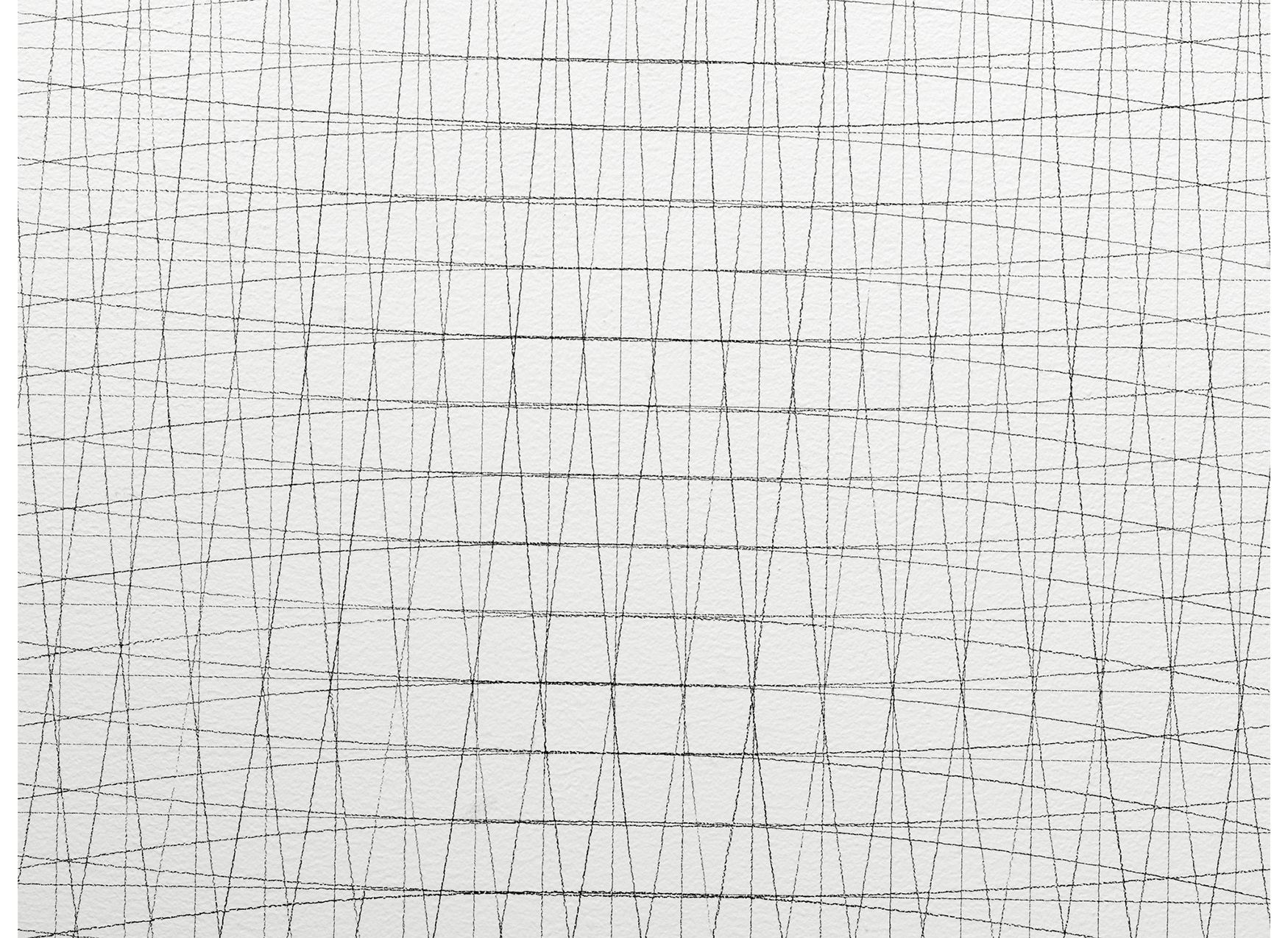 HD: Now that you’ve worked on the map, do you have a different understanding of the work the Spatial Analysis Lab does and how it contributes to campus?

LC: Yes, absolutely. I feel like I have a new understanding of both spatial analysis as a larger concept and the Smith SAL in particular. I knew that the SAL existed, but I didn’t know exactly what it did. I had never used an interactive map before, let alone helped to create one. It’s so exciting to think about the artworks through this lens, considering how they’re all physically, or spatially, related to each other rather than being completely separate works. And now I want to take a class that the SAL is involved with, and learn how to make one of these maps by myself!

HD: The SAL really is a hidden gem at Smith. I first got involved through the Environmental Science & Policy (ES&P) major.

LC: Could you tell me a bit about how spatial analysis figures into ES&P and the things that you study?

HD: Yes! ES&P uses ArcGIS as a way to examine the environment at a much finer level. The way I view ArcGIS and spatial analysis is as a tool for solving problems. You take spatial data layers—like, for example, the points that we used for the different artworks on campus—and you place them on a map to play around with how they look and the stories you want to tell with them. With ES&P in particular, spatial analysis is a tool to help you evaluate how the environment is changing. For example, I did a special studies where I mapped how a shore in Belize had eroded over time. I’ve also worked on a project where I examined the distribution of wildfires in California and how fire has changed the land in that area.

LC: I’m curious to hear if there’s anything about the process of making the map that you want to share, maybe something that users of the map wouldn’t otherwise know?

HD: Something that’s interesting to think about is that the map wasn’t always divided into three separate sections. In the final product, we have the artworks split into “Around SCMA,” “Near Lyman Plant House,” and “Further Afield,” but it didn’t start like that. At first, we wanted to have one long path along the map. But while I was working with Emma and Gina, we decided that sections would help to divide not only the artworks but also the time someone spends using the map. For example, if you’re taking kids or students to use the map, you could do one section before lunch and one after lunch. I think it really helps to divide up the tour.

LC: I didn’t know that! It’s so impressive to think about how much work you really put into making this map a great learning tool.

Another thing that was funny, and that people using the map would never know, is that a lot of times I would have to go onto Smith’s campus to figure out where an artwork was located. I was living in Northampton this past fall semester, so sometimes if we weren’t sure exactly where something was, I’d just head over to campus and get the exact coordinates.

HD: That was so funny to me, because I was at home in Minnesota, so I had to find everything through Google Earth. I had a vague idea of where the pieces were from living on campus for three years, but it was really just a guessing game in terms of the exact location, until you got involved and were able to help out on the ground.

LC: I really am so glad I was involved in this project. The map turned out so well!

HD: I agree! I’m super excited that I got to work on it. It was totally different from the work I usually do, and it was a lot of fun to work with all of you at SCMA.

LC: Thanks so much for chatting with me, and also for all of the hard work you did on the map. I’m excited to see how other people use it!

Next time you visit, make sure to check out the Beyond the Museum map to explore all of the artwork across Smith’s campus!