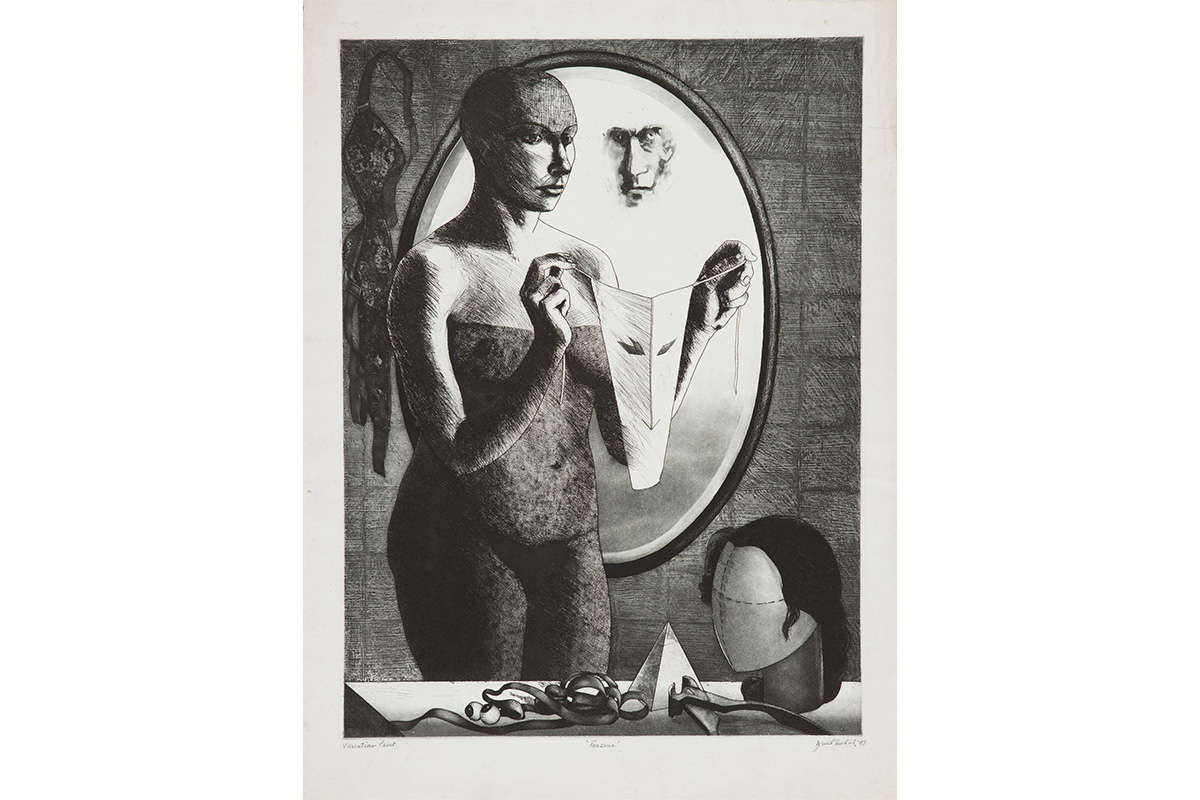 The print was made by Anupam Sud, an important contributor to the development of printmaking in India through her artistic practice and her teaching and training of art students. Born in Punjab in 1944, Sud studied at the College of Art, New Delhi from 1962 to 1967. Thanks to a scholarship from the British Council, she studied at the Slade School of Fine Arts, London in 1971-72. For 25 years, she taught at her alma mater, College of Art, New Delhi, until her retirement in 2003. She currently lives and continues to make art in New Delhi.

The print features an almost nude person “putting on a persona” as the title suggests.

It was made in 1988. That year Sud was nominated by the Indian government to represent the country at the Asia Printmaking Workshop at the Fukuoka Art Museum in Japan. During the residency there, she encountered Kabuki theater and became intrigued by its use of makeup and masks which inspired some of her works over the next couple of years.

This is a print made with etching and aquatint. These techniques produce incised lines and tonal effects respectively by using acid to eat into a metal plate–now usually zinc–to create recessed or sunken areas into which ink is applied. The imagery would then be transferred onto paper when the plate is placed against it and passed through a printing press.

Printmaking is a medium of multiplicity, and prints made from the same matrix are not necessarily always identical. For example, changes in the ink used can result in color divergence, or a plate can be modified to create a slightly different image. The inscription on the lower left of Persona indicates that this is a “variation print.”

A person, possibly a woman as suggested by the bare breasts, stands in an interior space. The brassiere hanging on the wall seems to confirm the female identity. The ghostly face appearing in the mirror behind her, however, might imply the opposite gender. Perhaps as soon as she puts on the mask held in her hands, she would transform into another person. Here Sud probably gives a clever nod to Kabuki theater’s long tradition of cross-dressing. The wig, tape measure and other tools on the table in the front indicate a profession as a tailor or dresser. The background with squared patterns is evocative of Japanese screens decorated with gold or silver leaves.

In March, for the first time since the outbreak of the COVID-19 pandemic, I went to Asia Week New York which is an annual collaboration of museums, auction houses, galleries and cultural institutions to exhibit and present the best of Asian art throughout the city. The event attracts specialists, curators, dealers, and collectors from all over the country and across the globe. This year, I visited DAG gallery where they had on view A Place in the Sun: Women Artists from 20th Century India, an exhibition exploring the remarkable contribution of trailblazing women artists to Indian modernism. Among the featured artists, I was drawn to Anupam Sud and especially her prints. After some consideration and discussion with other curators, we decided to purchase Persona for the SCMA collection.

This print adds to SCMA’s growing collection of contemporary art by South Asian women artists, which is one of the museum’s collecting priorities. Examples such as Pushpamala N’s photograph Motherland, Arpita Singh’s print I Could See London through Clouds and Bani Abidi’s Duratrans lightbox Karachi Series – I (Chandra Acharya) can all join this new acquisition for a rich conversation around identity and womanhood.

Our collection also has Japanese prints–both historical and contemporary–depicting Kabuki actors, which have an interesting resonance with Sud’s portrayal of an almost mystical character that was most likely inspired by her Japanese experience. If expanded into the greater realm of theater performance, role-playing and gender nonconformity, there are many more works of art in the SCMA collection with which Persona has a meaningful connection.

I am drawn to the contrast between the calmness displayed on the standing figure’s face and the intensity of the gaze of the specter in the mirror. Are they content or exasperated? Are they female or male? Are they one and the same? This image for me captures the ultimate human predicament and excitement: we all harbor a variety of personas within ourselves.