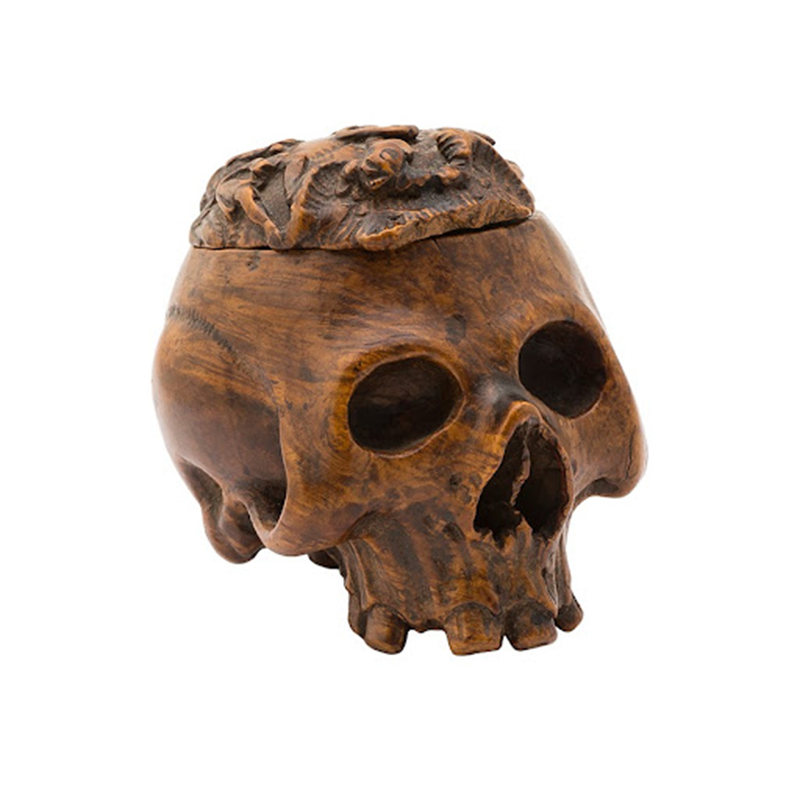 Vanitas Snuff Box in the Shape of a Skull

The SCMA recently acquired an 18th-century snuff box in the shape of a skull; learn more about this curious object, its imagery, original function, and historic context from curatorial research assistant, Annalise Edwards '23J.

Over the course of the last couple of months, I have witnessed the acquisition of a new artwork into the SCMA’s collection. Vanitas Snuff Box in the Shape of a Skull (c. 1740-1760) comes to us from Chicago, Illinois’ Les Enluminures gallery, and it’s arrival at Smith signifies the arrival of an object unlike anything else in our collection. Most often employed in seventeenth and eighteenth century still life paintings, ‘Vanitas’ refers to human mortality and the transience of material goods. It derives from Biblical references to vanity, and aims to remind viewers of the fleeting benefit of giving into material and superficial desires. Also, Vanitas imagery is closely related to the notion of ‘memento mori,’ a Latin phrase meaning: “remember you must die,” which produced its own brand of art, though more centered around decomposition and death’s inescapability than Vanitas. Vanitas Snuff Box in the Shape of a Skull is an extraordinary example of these themes, sitting at the crux of the two, and has the potential to generate significant conversations and insights as a teaching object.

Though smoking tobacco had been widely used in Europe since the sixteenth century, snuff, ground tobacco leaves meant to be sniffed rather than smoked, came into demand with the plague of 1665. It was first thought to have disinfecting and medicinal qualities, and its popularity later skyrocketed across the continent as it transformed into a symbol of luxury and high social status for both men and women. Snuff’s handheld materiality required it to be kept in small, portable containers, often ornamentally carved or decorated to further indicate its user’s elevated social standing. The containers would be stored in waistcoat pockets when on the go or on mantelpieces and tables when indoors so that the consumer could get their fix at any moment.

Taking into account this historical context while also considering the Vanitas and Memento Mori motifs informs the contemporary viewer’s understanding of the object in question, Vanitas Snuff Box in the Shape of a Skull. If I were to engage with the box as it was intended, I would pick it up from its place on a table or take it out of my pocket, carefully open the lid, pinch and carry the contents to my nose, and sniff. As I would open and bring the object closer to my face, I would be presented with the Expulsion of Adam and Eve from Eden, a scene delicately carved into the surface of the lid, which borders the top of the skull. The movement leading up to this presentation would act as a conversation between myself and the snuff box, in which I would be reminded of my own mortality, as well as the impermanence of the goods I am going to consume.

Placing an everyday object like this in a museum setting changes a viewer’s perception of it, since one will now only be able to look at it from a distance, and in a completely different setting than where it once lived. While this shift might initially inhibit a viewer from physically reenacting the activity required of the snuff box, it consequently offers a new perspective for thinking about the object. The skull’s presence in a more formal, sterile, and public location forces the modern-day viewer to consider what it means to look at an art object, especially one with an origin of interactivity. Considering the passive gaze that was originally given to the skull, viewers will now have the opportunity to more carefully engage in the act of prolonged looking, particularly at the Expulsion Scene atop the skull. Because museum-goers will not be able to physically handle the Snuff Skull when it enters the museum’s galleries, they will be faced with the object’s more reflective, more theoretical qualities. A new moment of intimacy and reflection between the viewer and the object is created by the ability to peer into the hollow eyes of the perfect wooden replica of a human skull, and to gaze onto possibly the most recognizable scene of human mortality. Thus, perhaps the loss of the audience’s ability to mimic the skull’s intended use is not a loss at all, but an opportunity to view the piece in a new light, while still maintaining the strength of its original meaning.