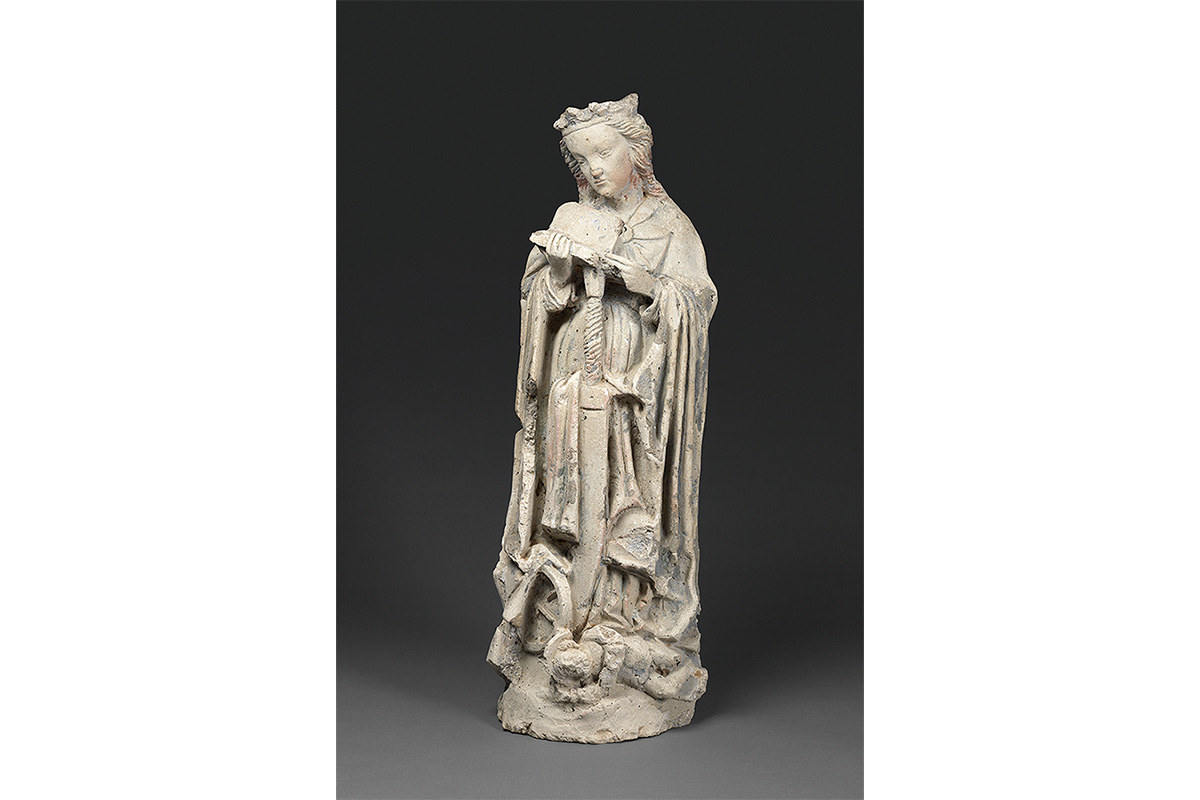 Julia Bender, a master’s candidate at the University of Massachusetts, Amherst in the History of Art and Architecture department, explores the mysterious past of SCMA’s Saint Catherine sculpture.

Although several versions of the story of Saint Catherine of Alexandria exist, the most common involves her protest of the persecution of Christians by 4th-century Roman emperor Maxentius. When the emperor found out that this beautiful, intelligent and devout young woman was converting members of his empire to Christianity, he summoned philosophers and scholars to persuade Catherine that she should abandon her faith. After this venture failed, Maxentius ordered that she be tortured on a medieval mechanical device composed of four spiked wheels. Remaining steadfast in her Christian devotion, Catherine prayed that God intervene, and seconds before her body touched the sharp spikes, a bolt of lightning struck down and destroyed the object. Furious that his plans had been foiled again, Maxentius ordered the beheading of Catherine, ultimately inaugurating her status as a Christian martyr.

Catherine’s perseverance and martyrdom became widely circulated throughout the Christian world after her body was rediscovered by monks during the 9th century. She was soon firmly established as the saint of students, philosophers and young women, evident through the extensive collection of art and architecture dedicated to her during the medieval period. One such sculpture was donated to Smith College in 1974 on behalf of Smith alum Louise Day Putnam, class of 1909. Here, Saint Catherine can be seen with all of her most common attributes: an open book, sword, crown, wheel and Maxentius at her feet. She reads from her book, seemingly unaware of the viewer’s presence, and allows her garment to drape over the crossguard of the sword. Standing about 30 inches tall, this sculpture likely would have been used as an architectural element, perhaps on the outside of a church.

Soon after the SCMA’s Saint Catherine was examined by experts in the field, questions began to form about its authenticity since the United States saw bountiful forgeries of medieval art in the late 19th and early 20th centuries. Certain stylistic oddities that may point to a classification of this sculpture as forgery include the unusually large sword and the rather awkward positioning of her book. However, the style of the piece has not caused experts the most apprehension; it’s the technique. Cast stone, which involves the mixing of natural elements and natural aggregates and then pouring them within a fixed mold, was a prolific artistic technique in the ancient Roman world but largely believed to have died out until the beginning of the Renaissance. This, combined with the stylistic qualities, led some scholars to believe that SCMA’s sculpture was made outside of the medieval realm.

Despite these long-held concerns, a fascinating journey of research and discovery has revealed numerous indications that this sculpture may indeed be authentic. While initially it was assumed that the sculpture came from somewhere in France, the aforementioned stylistic oddities of SCMA’s Saint Catherine seem to all be identifiable with sculptures from Central Europe. One authentic example from the Netherlands shows how Catherine’s book is positioned in a similarly awkward position, as if to share with the viewer what it is she sees on the page (fig. 2). However, the most striking comparison is to a popular sculpture type produced in Germany and the Netherlands during this period known as the Schöne Madonnas, or Beautiful Madonnas. With the S-shape curves of the bodies, tilted heads and wide-set eyes, Schöne Madonnas are notably similar to the SCMA’s Saint Catherine. Significantly, this sculpture type is also commonly made of cast stone, suggesting this technique was not as obsolete as previously thought (fig. 3).

Although rarely explored, the casting technique appears to have been in use across parts of Western and Eastern Europe well before the Renaissance. Although it can’t be definitively proven, a conservation report from 1981 on SCMA’s Saint Catherine suggests that the particular pouring method used to create her is the same as that used in the medieval period.

Lastly, we may consider the provenance of the piece. The donor Louise Day Putnam most likely purchased this object at an art auction from the collection of George Grey Barnard in the 1920s. Barnard, a sculptor himself, was one of the most prolific collectors of medieval art in the 20th century, often splitting his time between collecting in France and selling to people in the United States. Would Barnard, trained and experienced in both collecting sculpture and sculpting himself, have been unable to decipher an authentic 14th-century sculpture from one that was made within his lifetime?

Given this research, I am convinced that the SCMA’s Saint Catherine was likely created sometime around the late 14th century in Northeastern France or Central Europe. The sculpture, then, would be a rare surviving example of a medieval cast-stone Catherine of Alexandria, suggesting that more research must be conducted on this subject to determine the prevalence of the casting technique before the Renaissance.  No matter what her origin or journey may have been, this enigma of a sculpture is waiting to be visited on the second floor of the Smith College Museum of Art, where viewers are welcome to form their own theories about her background.