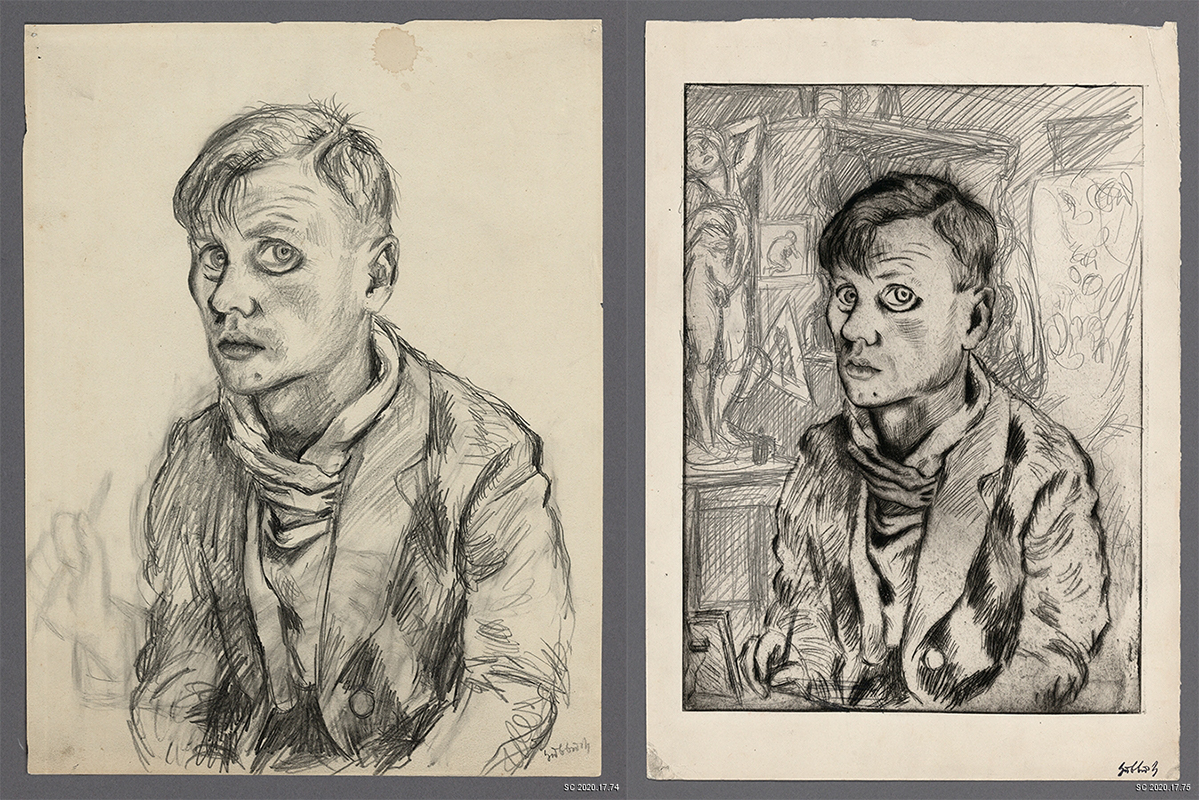 The gift of 144 drawings from the bequest of Carol O. Selle, class of 1954, has transformed SCMA's already outstanding drawing collection. Highlights from this momentous gift will be the subject of a series of posts featured on SCMA Insider.

The first post by Henriette Kets de Vries is devoted to work by Karl Hubbuch, a fascinating German artist previously unrepresented in our collection

We are now the proud owners of seven drawings and one working proof by his hand.

Hubbuch (1891-1979) was born in Karlsruhe Germany which came to be one of the provincial centers of the Neue Sachlichkeit (The New Objectivity) style. Neue Sachlichkeit represented a distancing from the more emotional German Expressionism, which was born out of WWI. Neue Sachlichkeit is recognized by its unsentimental, and often critical, representations of everyday life. Many artists, like Hubbuch, worked in both styles. This reflects their complex vision of the society they inhabited and the emotionally experiential transitions they endured.

Hubbuch began his studies before the onset of WWI at the academy in Karlsruhe where he met fellow artists Georg Scholz and Rudolf Schlichter. At first, Hubbuch was known in the academy for creating straightforward and well-executed portraits. Scholz and Schlichter discovered another side of their classmate's work when they found several "unheimliche" (unsettling or uncanny) paintings by Hubbuch in a local art shop.

Hubbuch continued his work in Berlin at the Academy of the Museum of Arts and Crafts where he met George Grosz and studied under Emil Orlik.  Hubbuch’s studies were interrupted with the outbreak of WWI (1914-1918) and his enlistment. As with many of his fellow artists who joined the campaign with naïve optimism, Hubbuch was clearly affected both mentally and physically by this unexpectedly long and gruesome war. He contracted malaria and was forced into a long recovery at his parents’ house in Karlsruhe.

Hubbuch moved to Berlin in 1922 where his work evolved from autobiographical and introspective scenes to more outward looking, somewhat cryptic observations of the world around him. He returned to Karlsruhe in 1924-5 to teach at the academy, reaching the rank of full professor and joining the United revolutionary artists Union in 1928. He also married his student Hilde Isay that same year. With the onset of WWII (1939-1945), he lost his position at the academy as the Nazis branded his work as degenerate. He was forced to find work in the decorative arts painting cuckoo clocks and ceramics until being reinstated to his former position after the war.

The impact of WWI is evident in this poignant self-portrait from 1920, the year Hubbuch returned to school in Karlsruhe.  In the typical Expressionistic style of the time, he portrays himself with deep sunken eyes which stare blankly at the viewer. During this time Hubbuch had begun working with the etcher and painter Walter Conz. It is Hubbuch’s work in the print medium that seemed to have influenced the use of line in this self-portrait. Where his usual portraits tend to be more seamless and smooth, here the lines are loose, coarse and evident.  What makes this self-portrait so perfect for teaching is that it demonstrates the many choices an artist makes when creating a work.  In the drawing we see Hubbuch making corrections in the positioning of the hand, which he moved twice.

Although Hubbuch did not fully erase the changes―we can still clearly see them―it is clear that he regarded this work as finished, as he signed it in the right corner. He took the drawing even further by turning it into a print.

The Selle collection also includes his original printed version. In this proof of the etching with pencil additions, Hubbuch moved the hand once again, not upwards as in his erased renditions but lower down.  It is as if we are capturing him in the very act of either drawing or resting, either turning the viewer into his model or using a mirror to draw his self-portrait.

We can see in this working proof that Hubbuch has “illustrated” the background of the print by filling in further details of his workshop in pencil.

This could potentially have been a sketch for an additional version (or state) of the print. However, I have not yet located any examples of the print with this background. It still might be out there somewhere; there is still so much research to be done on these works!

We are so thrilled to have these exciting works as part of our SCMA collection.

To see these works in person feel free to make an appointment at the Cunningham Center for Prints, Drawings and Photographs at SCMA. You can reach us by phone at: 413 585 2778 or by email at: CCenter@smith.edu