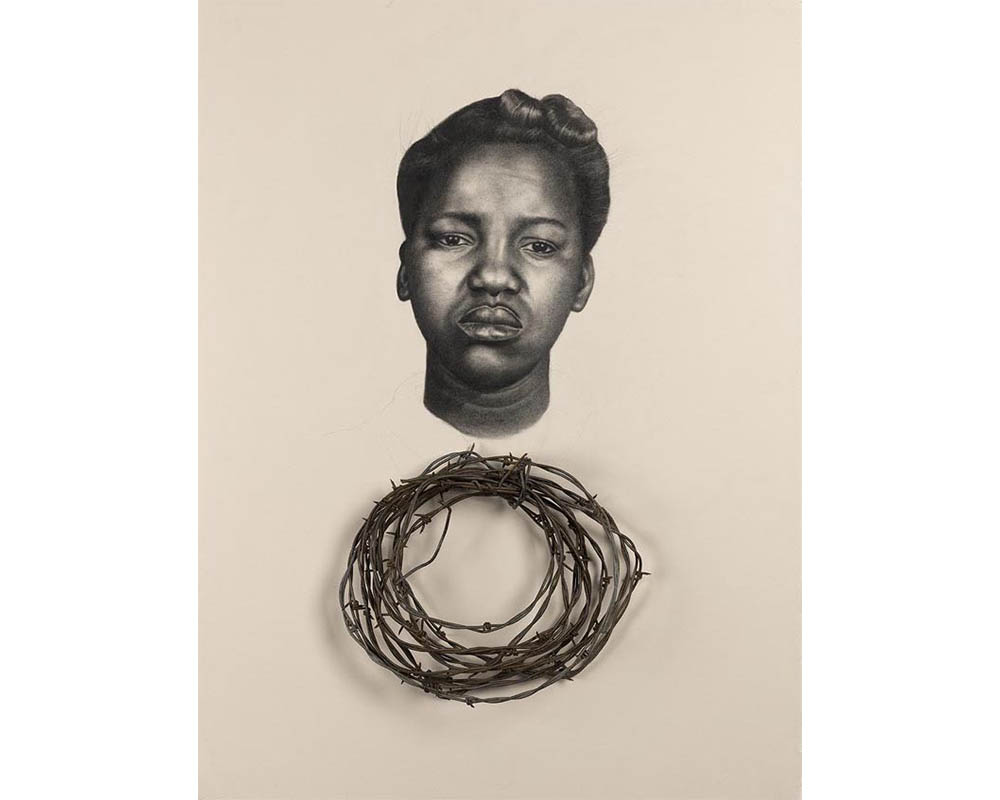 Maggie Kurkoski is a member of the Smith College class of 2012 and the Brown Post-Baccalaureate Curatorial Fellow in the Cunningham Center.

“I’m not particularly interested in making paintings. I’m not particularly interested in making drawings or that whole dialogue. But the fact that I’m doing this with my hand, and that it’s a hand-drawn image, is very important to me. I love the act of drawing. Of course I love drawings and paintings. But in my current work I’m mostly interested in the people and the imagery, so that my drawings are more in service to the imagery than being about ‘drawing.’ I do gain a lot personally from examining those old photos. A lot of that comes from my background, and my father having been a self-taught photographer. Most of the earliest imagery that I looked at was of his photographs. He did a lot of family portraits.”
– Whitfield Lovell [Source]

Seeing Kin XXXII (Run Like the Wind) in person is so different than seeing it as an image on a computer. I wish I could take you into the Cunningham Center and show you this drawing right now. Since the work is three-dimensional, Lovell encased the entire piece in a black box frame; it takes up a lot of space, projecting out from the wall. When you look at it directly, you’re really looking into a box, and it takes up all your peripheral vision. There’s a sense of being absorbed, or surrounded. 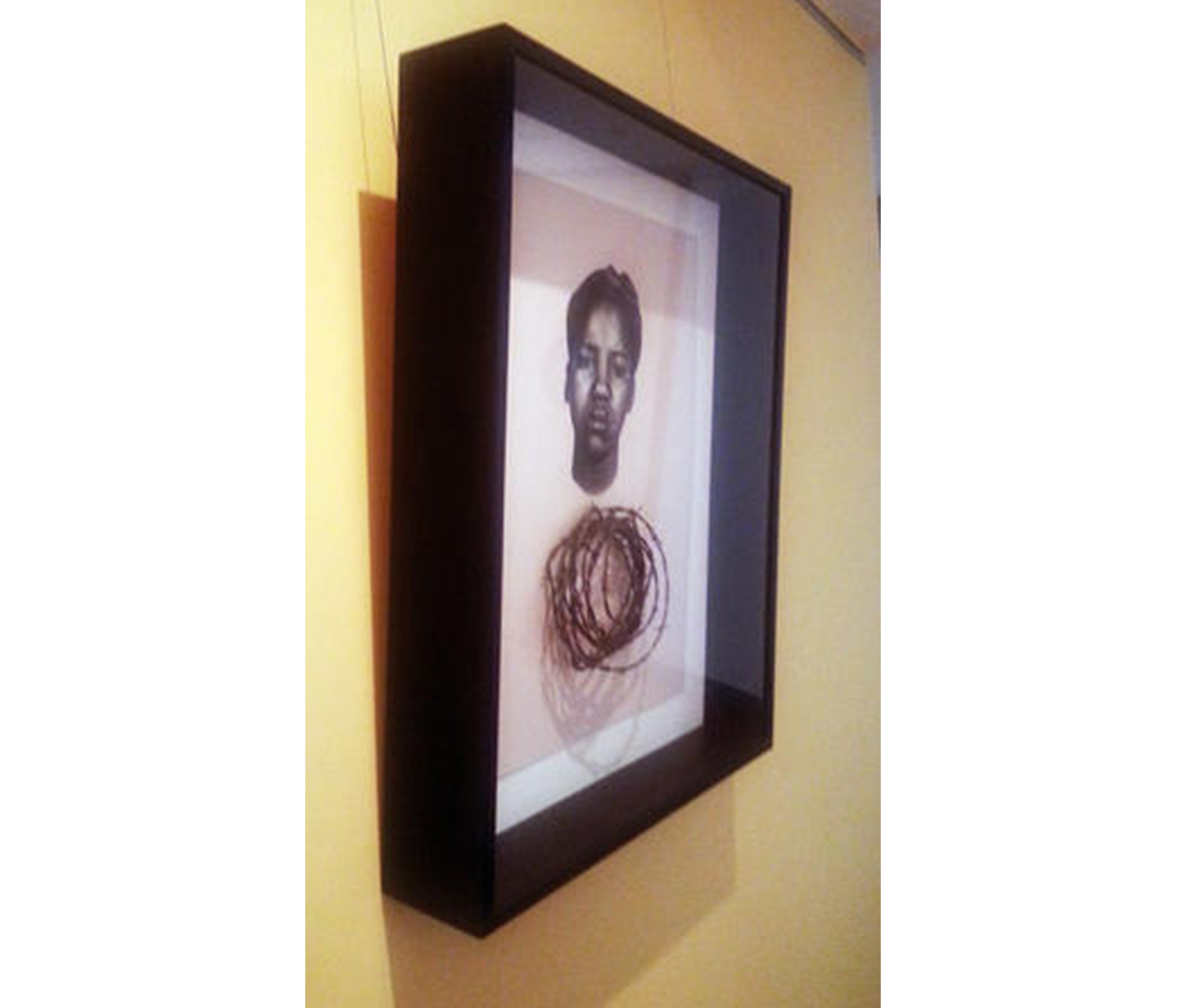 Shadow suddenly plays a major role when you look at Kin XXXII (Run Like the Wind) in person, too. Not only does the box frame create its own shadow on the wall, increasing its physical presence, but it casts a shadow on the drawing of the woman’s face. Likewise, the barbed wire has its own shadow, making it seem larger than it is. On some level, the work changes at every location, based on the lighting in every different gallery. 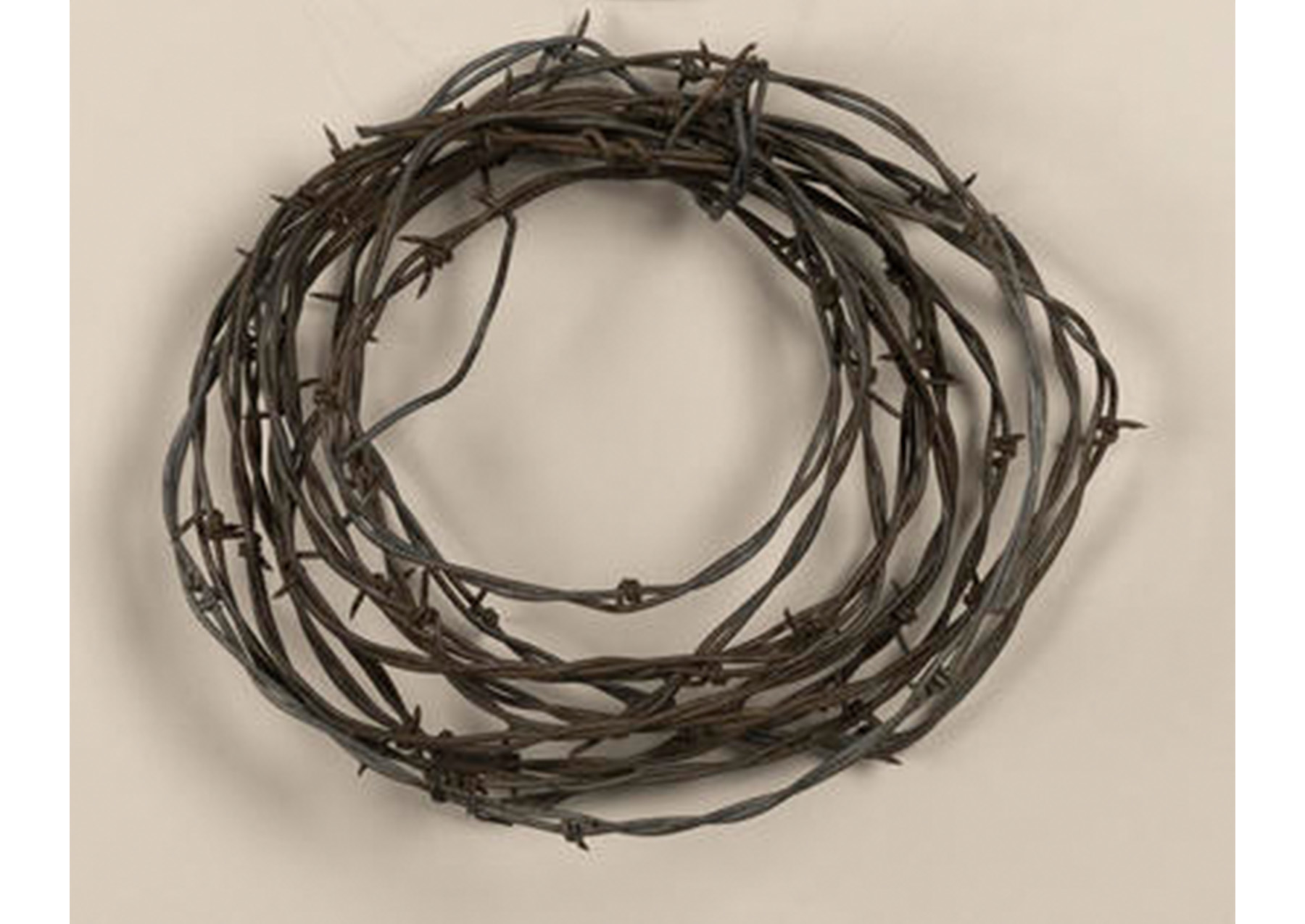 There are subtle details that are difficult to make out on a computer screen as well. When you look closely, you can see the light impression of a shirt color, fading into the blank background. Lovell has drawn delicate, light flyaway hairs emerging from the woman’s tightly coiffed hair. These small, meticulous additions speak to Lovell’s incredible skill and attention to detail. 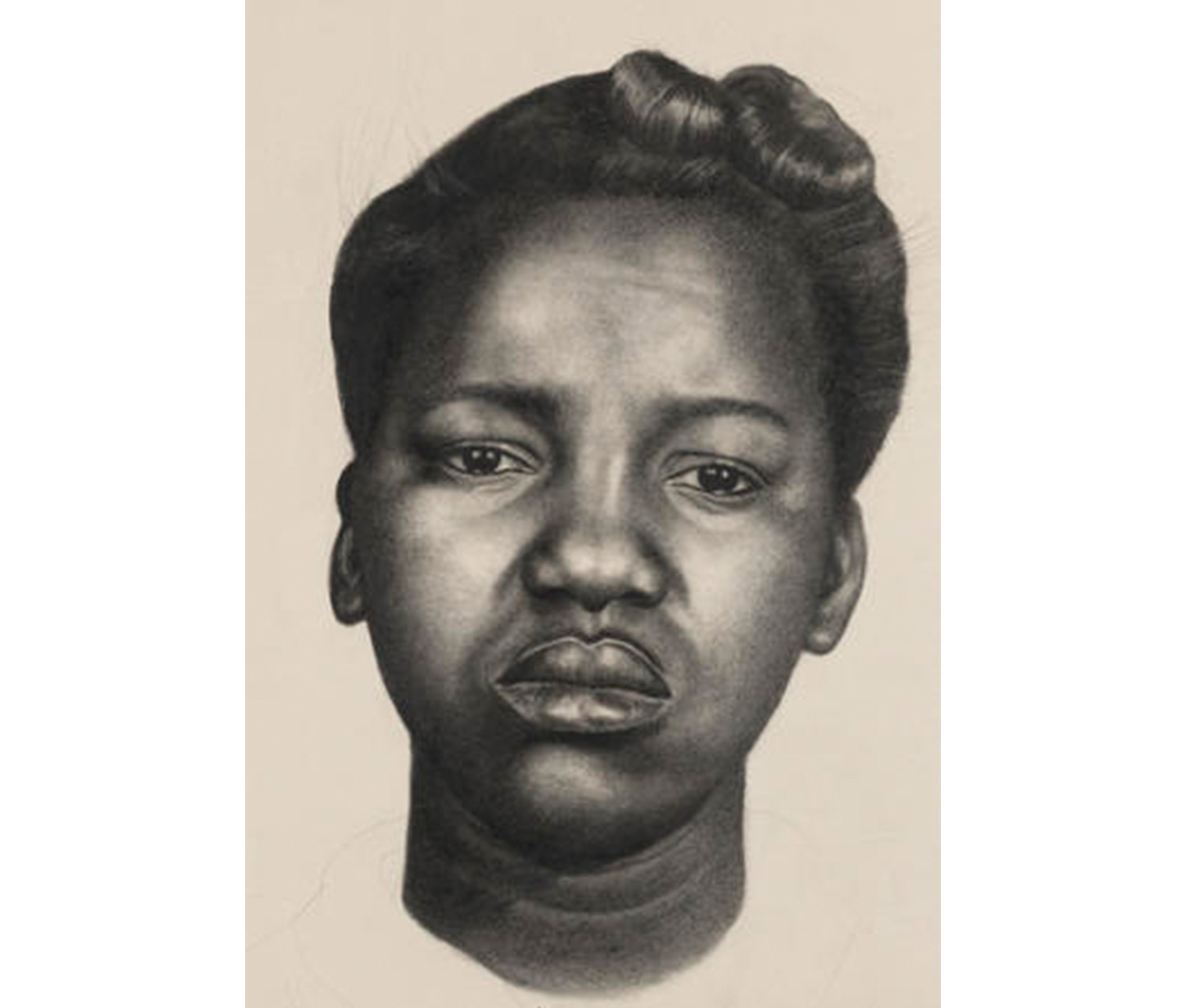 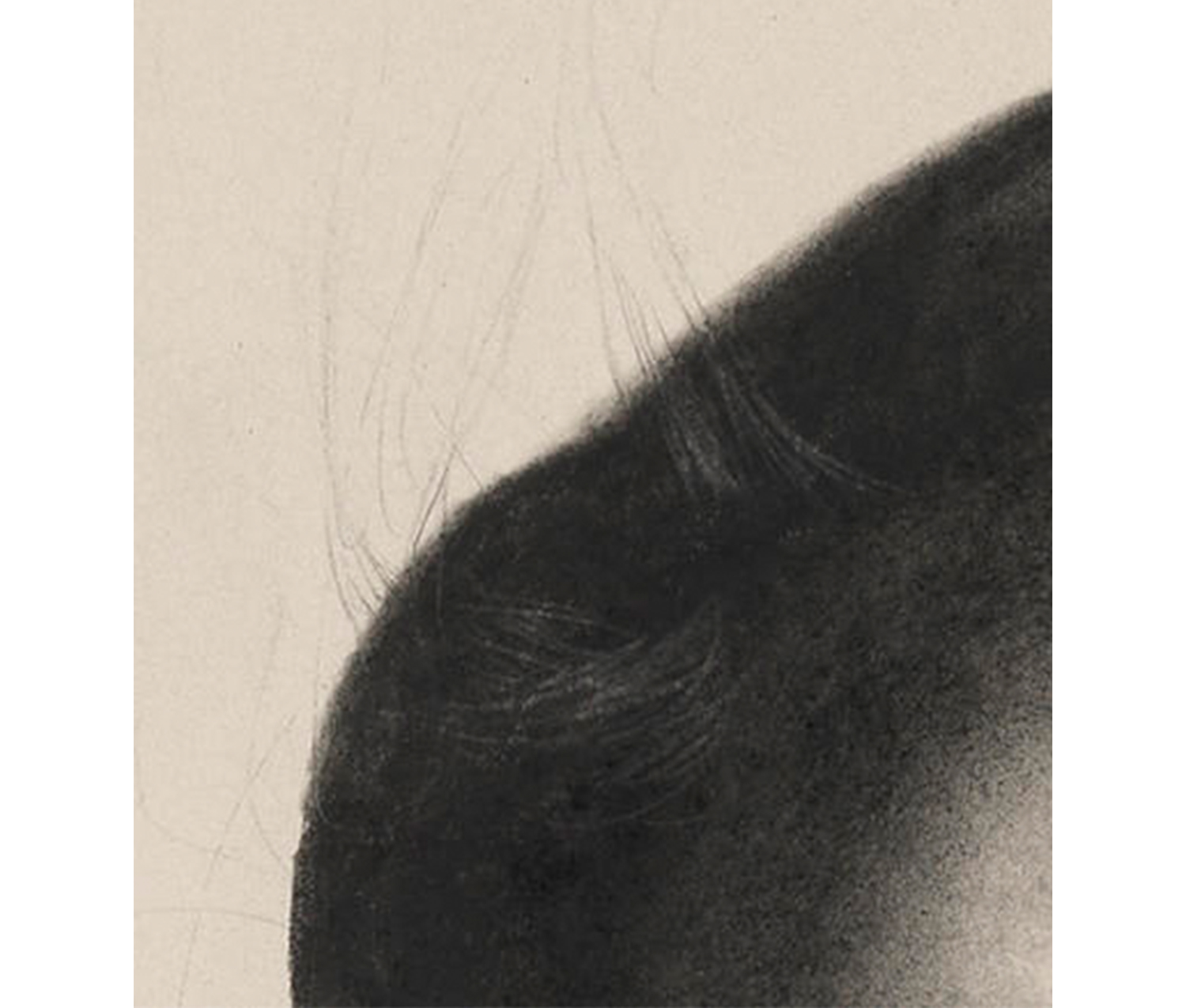 The barbed wire is rusted and old. Lovell doesn’t shy away from loaded symbolism, and so it immediately reminds me of the crown of thorns that biblical tradition says Jesus wore on the cross. Such an association conjures up suffering and sacrifice. In conjunction with her worried expression, the effect is disturbing. Does the barbed wire refer to some earth-shattering event in her life? Is it a reference to her personality somehow? Could it relate to the persistent pain of racism, both historical and present, which she faces as a black woman?

The title, Kin XXXII (Run Like the Wind), only complicates these ideas. Kin implies connection and relationships, even family. As this work is part of a much larger series, it makes me wonder about the connection between each piece. The statement Run Like the Wind could be a command or a description. Typically, barbed wire is used to prevent people from entering or leaving a place, and it contrasts sharply with the freedom that running implies.

Like all of Lovell’s works, this piece provokes more questions than it answers. This ambiguity, coupled with the sheer physicality of the work, creates a piece that sticks in your mind long after you see it.