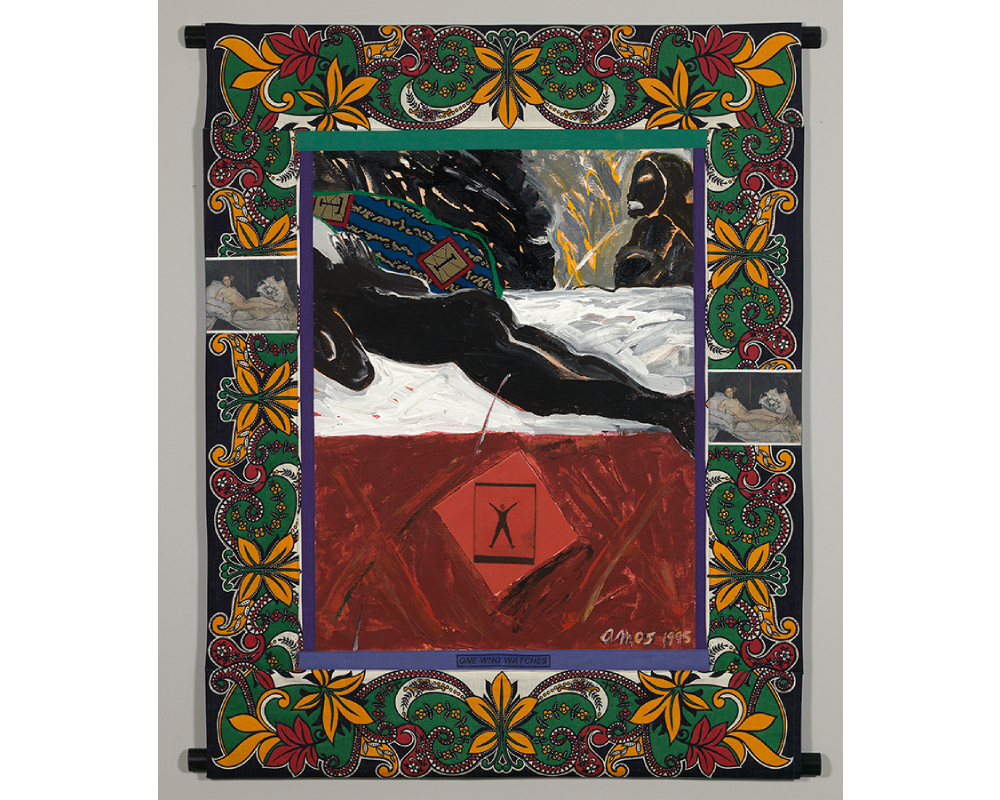 Alona C. Wilson, Ph.D., is a former Curatorial Assistant and Manager of the Cunningham Center for the Study of Prints, Drawings, and Photographs (1998–2006). Emma Amos’s painting One Who Watches is featured in the exhibition SCMA Then\Now\Next.

In 2001, the Black Students Alliance of Smith College gave a painting, One Who Watches, (1995) by Emma Amos, an acclaimed American artist, to the Smith College Museum of Art. The death of Ms. Amos on May 20, 2020 was a loss that elicited fond memories of my experience working with her on behalf of the Museum and the Black Students Alliance to acquire her painting for the collection. Her enthusiastic engagement and her sincere commitment to the students and the Smith College community are cherished remembrances.

Throughout my tenure with the Smith College Museum of Art (1998–2006), Mentha Hynes, then Assistant Dean of the Office of Multicultural Affairs, and I often strolled the galleries and spoke of how to engage the students about art, particularly those who were non-art majors. At that time, several members of the Black Students Alliance (BSA) expressed a desire to see art reflective of themselves in the galleries. In an effort to address the lack of Black visual presence, the BSA members committed funds earned from their events in 2000 to purchase a painting for the Museum to represent empowerment for Black women. Because I had an established relationship with Ms. Hynes along with several members of the BSA, I presented the very generous offer of the BSA Executive Board to the Museum curatorial staff: Suzannah Fabing, Director, Linda Muehlig, Curator of Paintings and Sculpture, and Ann Sievers, Curator of Prints, Drawings, and Photographs. Immediately, they agreed to support the BSA initiative for a gift and designated me the liaison for the museum.

We formed a committee comprised of the BSA Executive Board, Ms. Hynes, Linda Muehlig, and me to establish the selection criteria for the purchase [1]. The curatorial staff provided guidance to the students about art collecting and exhibiting as well as an historical overview of African American art and artists. Together the committee reviewed artist biographies, art works and materials, and prioritized the choices. The BSA selected the works of Emma Amos. Her paintings speak to the history of art, gender privilege, women artists, and contemporary issues, particularly of race and African American culture. 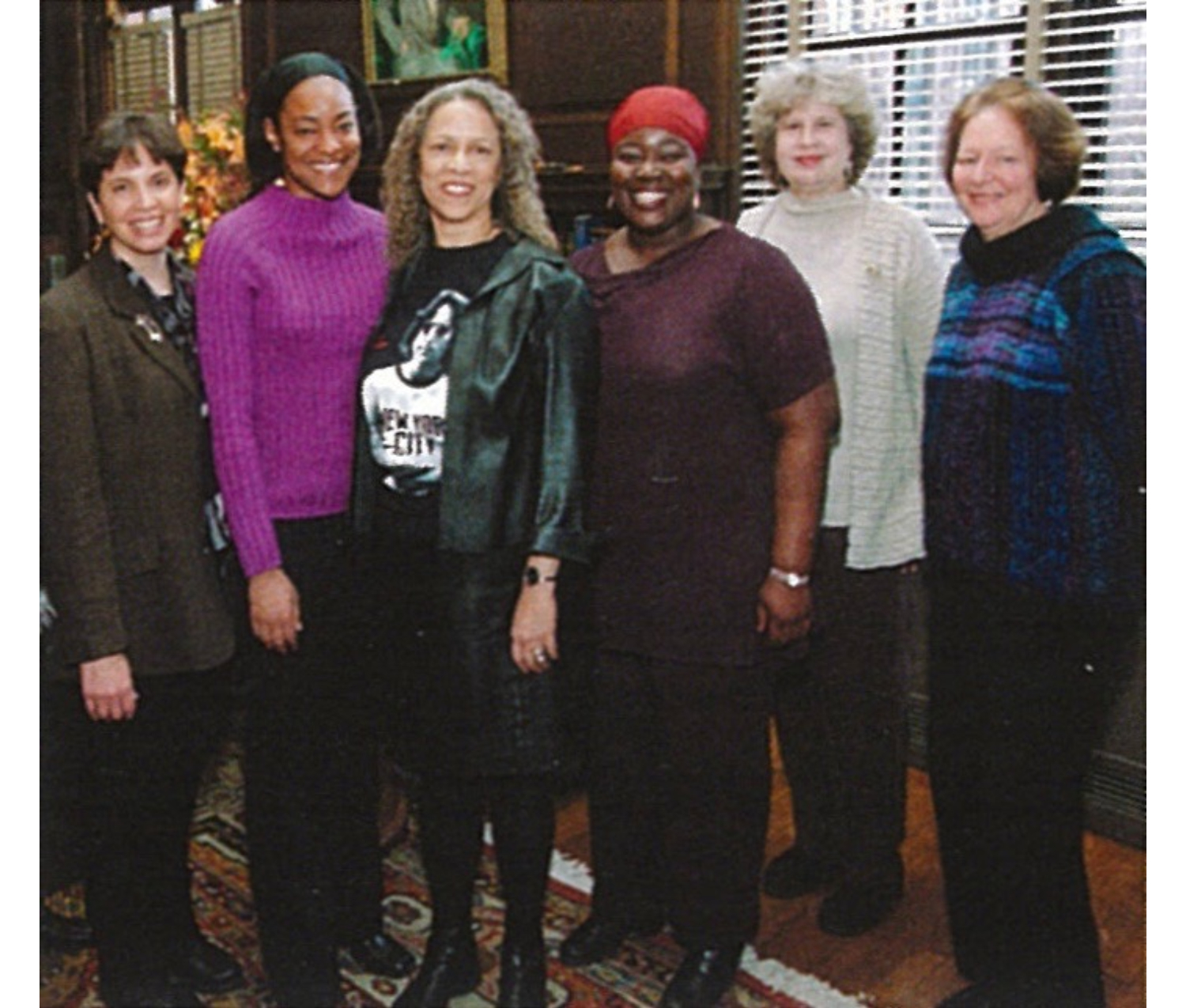 During the Black Arts Movement of the 1960s, many Black women became activists in support of racial, economic, and political equality as well as women’s rights. Ms. Amos was the only female member of the artists collective Spiral, organized by African American artists Romare Bearden and Hale Woodruff. She later contributed essays on issues of feminism and activism for Heresies as well as M/E/A/N/I/N/G magazines. She created and exhibited her own works while simultaneously teaching at Rutgers University.

In fall 2000, Ms. Muehlig and I began negotiations with Ms. Amos, who strongly supported the project with the BSA and extended an invitation to visit her studio. We viewed her paintings in the New York apartment that she shared with her husband and children in a SOHO neighborhood. Her paintings hung on intensely-colored walls and their stitched borders were of either printed African fabrics collected abroad or with fabrics acquired in New York City. Ms. Amos escorted us to her small studio space located in the rear of the apartment. She kept a sewing machine on a table, paint and brushes on shelves, and fabrics folded or rolled throughout the room. She explained to the students her ideas and techniques, which demonstrated her gifts as a teacher. We selected a work for the Museum’s collection that day and for a brief moment, we witnessed the artist, teacher, mother, and wife at work.

We chose, One Who Watches, which references paintings by Edouard Manet, Olympia, (1863) and Paul Gauguin, Manao Tupapau (The Spirit of the Dead), (1892). Ms. Amos copies segments of the original work of these artists to create her painting in which she contemplates the power relationship between the artist and the subject. In her painting, she reflects upon the representation of Black women’s bodies in the history of art and by extension Black identity in contemporary society. She extracts and repaints these masterworks to claim or reclaim her presence. By employing both her signed signature and an X symbol, which is created from a photograph of Ms. Amos’s Black body with arms and legs extended outward, she affirms and claims her artistic work and reclaims her body.

On February 23, 2001 in the Smith College Neilson Library, Ms. Amos delivered a lecture about her work hosted by the BSA, SCMA, the Office of Multicultural Affairs, and the President’s Office. She addressed her painting in the context of the history of Western art and African American art. She stated, “. . . they [male artists] also had this privilege to paint the dark body in any way. . . part of what you are seeing in this work [One Who Watches] is my response to their privilege” [2]. The evening concluded with a dinner for Ms. Amos arranged by the BSA and the committee members.

Several weeks later, the painting arrived to campus and then the President’s residence. President Ruth J. Simmons had it installed on a prominent staircase wall, visible after entry to the house. The unveiling of the painting was part of a celebratory tea hosted by President Simmons to honor the contributions of the BSA, represented at the event by Abena Abrokwah ’01, Sonja Killebrew ’01, Elisha Smith ‘01, and Shakera Walker ‘01. Mentha Hynes and I were privileged to be included. President Simmons kept the painting on view through the graduation and reunion events of that year. 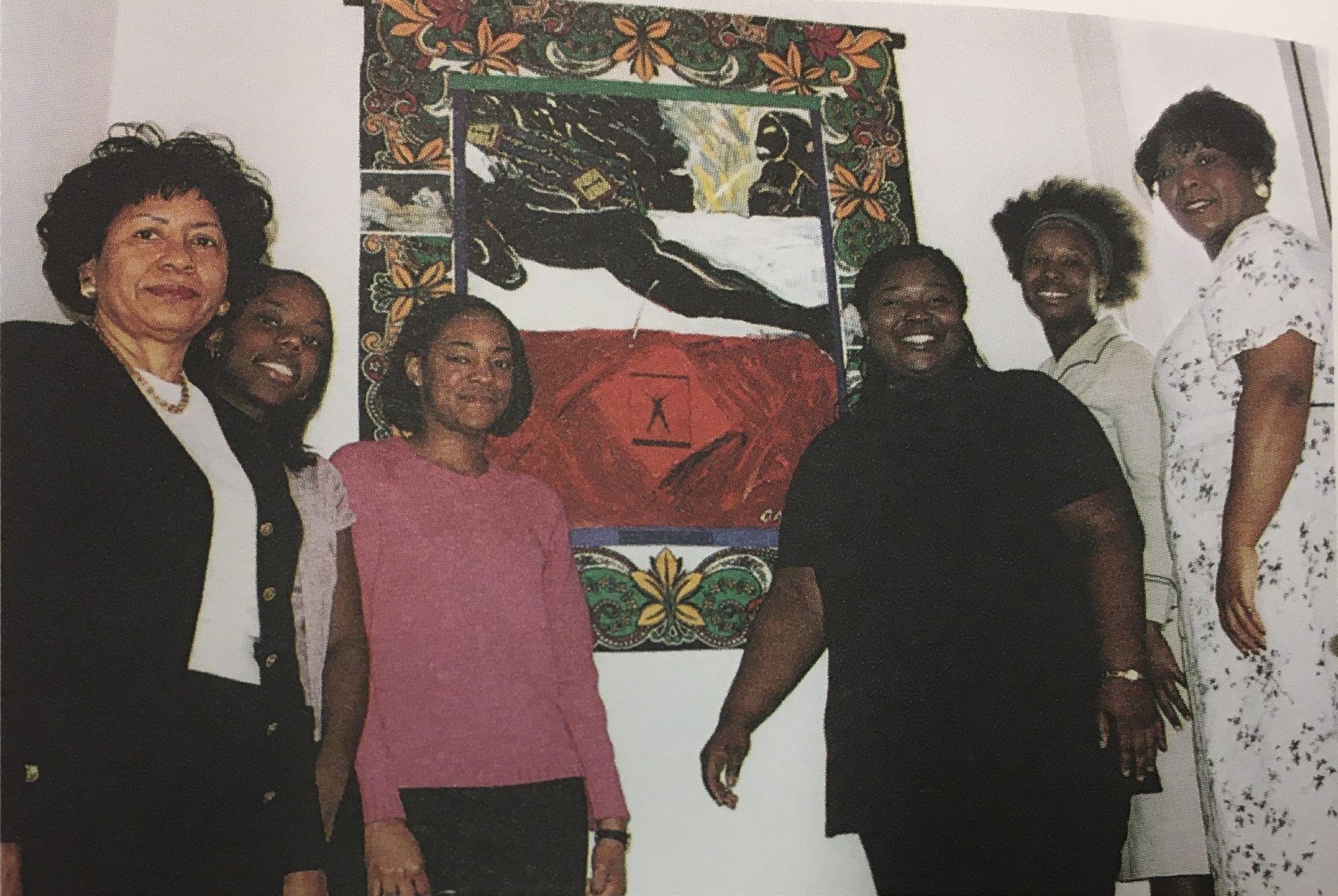 From left to right: Smith College President Ruth Simmons, Shakera Walker, Elisha Smith, Abena Abrokwah, Sonja Killebrew, and Assistant Dean of the Office of Multicultural Affairs Mentha Hynes with One Who Watches at the President’s House, 2001

Student voices take many forms of activism to impact campus life at Smith College. The leadership, collaboration, and largesse exercised by the BSA and supported by President Simmons expanded their student voices for change. The exceptional painting by Emma Amos is an extraordinary gift and I was honored to share in and be a part of the acquisition.

[1] Elisha Smith and Abena Abrokwah were actively involved in the process; however, the committee remained small and flexible to allow any BSA member to join in meetings based on their time allowed.