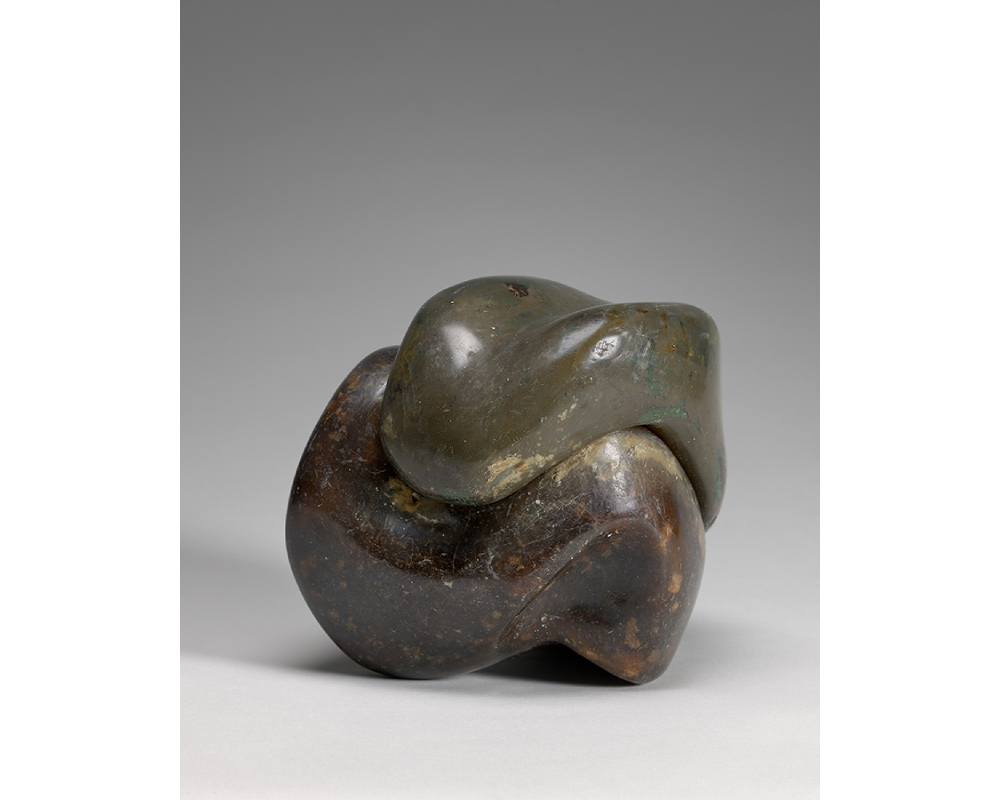 Dual
Saloua Raouda Choucair
Lebanese
Purchased with a gift from Betty Hamady Sams, class of 1957, and the Beatrice Oenslager Chace, class of 1928, Fund

Emma Chubb is the Charlotte Feng Ford ’83 Curator of Contemporary Art at SCMA. Below, enjoy her installment in a series of blogposts about works on view in SCMA Then\Now\Next, the Museum's centennial exhibition.

In 1975—the year that would later mark the beginning of the Lebanese Civil War—Saloua Raouda Choucair (1916–2017) began what would become a significant body of sculpture in several different materials, all titled Dual (thana’ia in Arabic). SCMA’s Dual is comprised of fiberglass layered over clay. With its green and brown earth tones, the two liquid forms fit together perfectly but can also be exhibited side-by-side. One sculpture in two parts, this Dual’s organic, almost cube-like shape and stone-like surface lead the eye over, under and around.

SCMA purchased Dual in 2019 as part of its commitment to presenting innovations in modernism—and abstract painting and sculpture in particular—made after World War II and as they took shape outside of the so-called centers of New York and Paris. A major artist of the twentieth century, Choucair was in her thirties when she decided to become an artist. She attributed the decision to her desire to disprove the claims of Western cultural superiority that some professors at the American University of Beirut espoused at the time. Throughout her six-decade-long career, she remained deeply curious about the world around her and found inspiration in a wide-range of materials, from quantum physics, molecular biology, and optics to Arabic poetry, Islamic art and architecture, and modernist architecture. Although primarily a sculptor, she worked intensively and ambitiously across media, designing houses, furniture, jewelry, public art, and textiles. Some of these large-scale projects were realized; many more were not.

Between 1975 and the mid-to-late 1980s, Choucair carved or shaped by hand numerous Dual sculptures in terracotta, wood, and fiberglass; she cast others from brass and aluminum. The Duals elaborate on the kinds of stacking, interchangeability, and infinity of form that she explored in her earlier Movement and Poem pieces, all the while anticipating, according to Laura Metzler’s research, her subsequent interest in genetic research, DNA, and amino acid bonding [1]. SCMA’s acquisition of Dual speaks to this particular intersection of art and science in the 1970s—an interest largely overlooked thus far in European and U.S. institutional presentations of Choucair’s work—and hopes to catalyze new research in Choucair’s oeuvre.

Born in Beirut, Choucair studied at Lebanese, French and American schools in Beirut, lived for several years in Iraq where she taught natural sciences and drawing from 1937 to 1941, and worked in the library at the American University of Beirut in 1945. Active in the Arab Cultural Club between 1946 and 1948, she organized an exhibition in Beirut of European modernist paintings by artists such as Pablo Picasso, Georges Braque, and Alexander Calder. In 1949, she moved to Paris for three and a half years, studying art at the Academy of Fine Arts, Fernand Léger’s studio, and L’Atelier d’art abstrait. She exhibited, and was celebrated for, her work in Beirut throughout the 1960s and early 1970s. Although the Civil War curtailed exhibition and travel opportunities, Choucair and her family remained in Lebanon and she worked throughout the war. Her work was the subject of retrospectives at the Beirut Exhibition Center in 2011 and the Tate Modern, London, in 2013.

Dual is on view in SCMA Then\Now\Next. For more on Choucair, see: Kirsten Scheid, “Saloua Raouda Choucair,” Mathaf Encyclopedia of Modern Art and the Arab World.

[1] Laura Metzler, “(And So On…): Genetics, Quantum Mechanics, and Transcendence in the Later Work of Saloua Raouda Choucair,” MA thesis, American University of Beirut, May 2014.