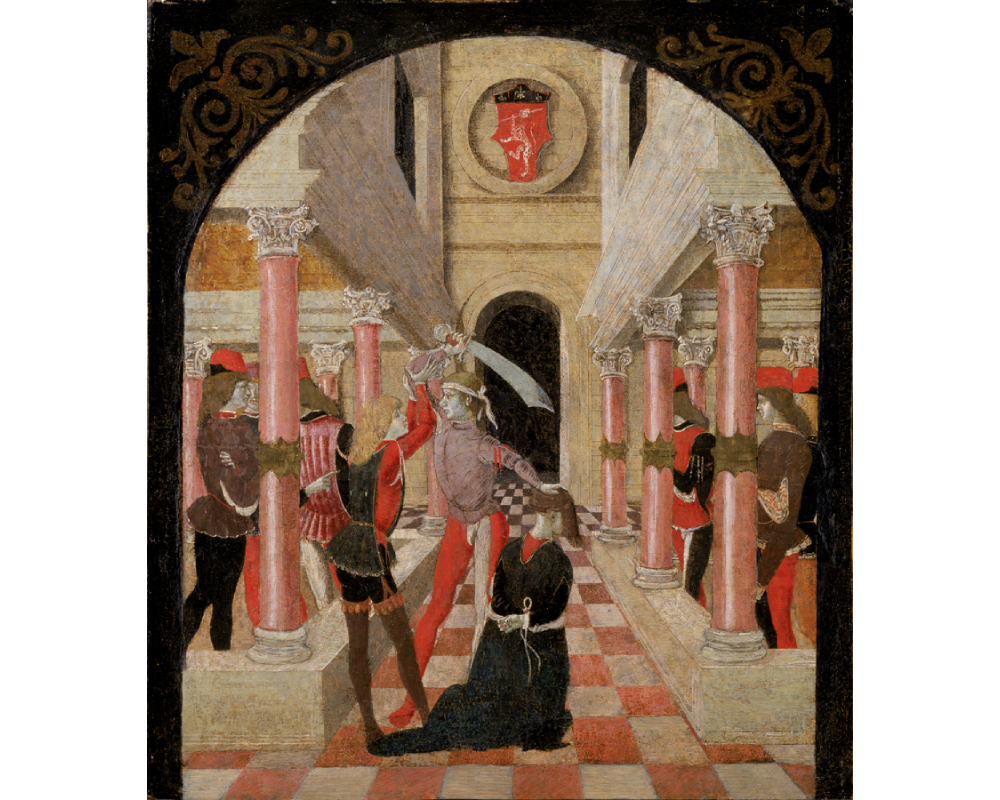 Scene of an Execution
Unknown
Italian
Gift of Mr. and Mrs. Arthur Wiesenberger

Danielle Carrabino is the curator of painting and sculpture at SCMA. Below, enjoy her installment in a series of blogposts about SCMA Then\Now\Next, the Museum's centennial exhibition.

The exhibition SCMA Then\Now\Next features many works of art that have never been displayed alongside each other. One of my favorite pairings is a Cubist painting by Picasso (below) and a small Renaissance panel painting (above). Upon first glance, this pairing may seem odd. Separated by nearly five centuries, these paintings appear to have nothing to do with each other. So why are they displayed together? The other curators and I would prefer that you answer that question for yourselves. What I offer here is the reason behind my own thinking behind this pairing. At least for me, the connections between these two seemingly disparate paintings are greater than we may assume at first glance.

The differences are obvious: the size, subject matter, and materials and techniques all reflect the time and place in which they were created. They also entered the collection in different ways at two different moments in time. While the painting by Picasso, one of the most recognizable artists of the western art world, has been on view almost uninterruptedly since arriving at the museum, the Renaissance panel by an unknown artist has spent much of its life at the museum in storage. However, the differences seem to end there. Their formal qualities are remarkably similar.

The 15th-century Renaissance painting was created at a time when one-point linear perspective was becoming increasingly popular in narrative painting. This scene is organized according to mathematical principles, including proportion, geometry, and the use of an underlying grid. Perspective creates the illusion of a three-dimensional space on a two-dimensional panel. It may be compared to standing in the middle of a railroad where the tracks appear to converge in the distance, even though they remain parallel. In this example, perspective is most readily seen in the checkerboard floor. The architecture of the space also shows lines converging to a single vanishing point at the center of the painting, located somewhere beyond the dark archway. The figures interwoven into this space appear to be based on a single model, perhaps rotated to suggest a variety of poses. Perspective was codified by several artists who wrote artistic and mathematical treatises about it. The influence of perspective on western art cannot be understated. It provided the basis for painting for several centuries. Ultimately, it allowed painting to be seen as a mirror of our own world.

Picasso, on the other hand, was one of several modern artists who approached painting in an entirely new way. In this painting, he shifted his attention away from creating an illusion of a three-dimensional space to focus instead on flattened, abstract forms. Picasso freed a table, guitar, and bottle of their volume, reduced them to their simplest shapes and forms, and then put them back together on the canvas. Though still recognizable, these abstract forms provide a way for painting to free itself from replicating how objects appear in the world by allowing us to view them from a variety of angles. This rupture draws attention to the painting as an artistic expression and endeavor.

Although Picasso’s name is often synonymous with modern art, he was also acutely aware of the art that had come before him. When he and Georges Braque created Cubism, they upended the recreation of three-dimensional space in painting that had existed since the Renaissance. At the same time, they drew inspiration from paintings such as the SCMA panel, which possess an underlying geometric order. It may even be argued that in order to appreciate Picasso’s work, we must consider it alongside a Renaissance painting. 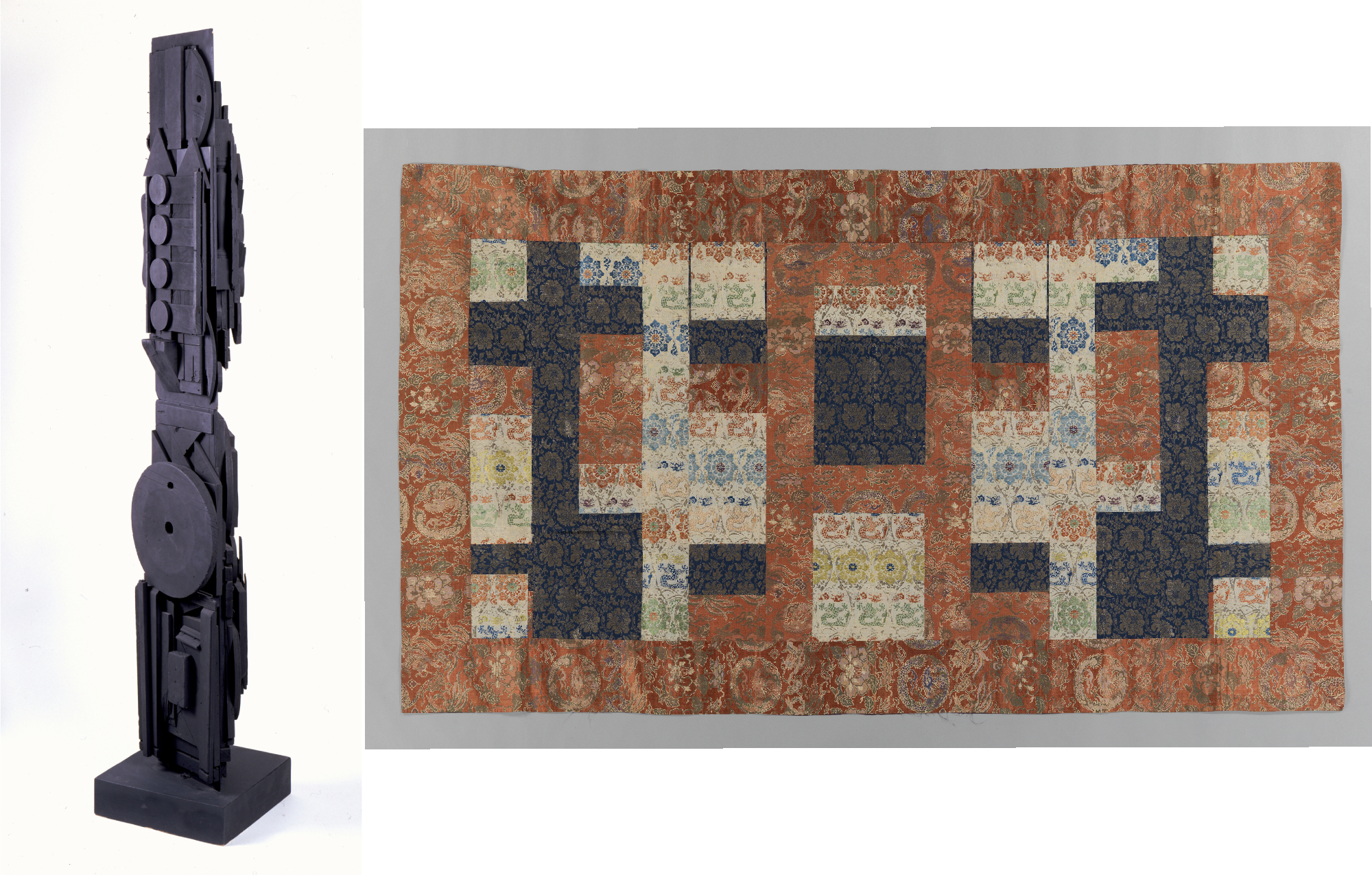 By viewing these two works of art side by side, the relationship between the two comes into focus. Such a pairing allows us to explore both works in a new way, not individually, but in comparison to each other. This mode of viewing may be continued throughout the gallery in an infinite number of ways. For example, both the sculpture by Louise Nevelson and the Japanese Kesa that are also located in close proximity to these two paintings offer additional points of comparison. In the case of the Picasso and the Renaissance paintings, the two share an affinity for geometric order. It is not necessary to know any of the information above or have any prior knowledge to perceive these similarities as it is apparent by simply placing them side by side. In breaking with the traditional way of displaying art by culture and time period, the juxtapositions in this exhibition allow for an exploration of the SCMA collection to be viewed in new and exciting ways.