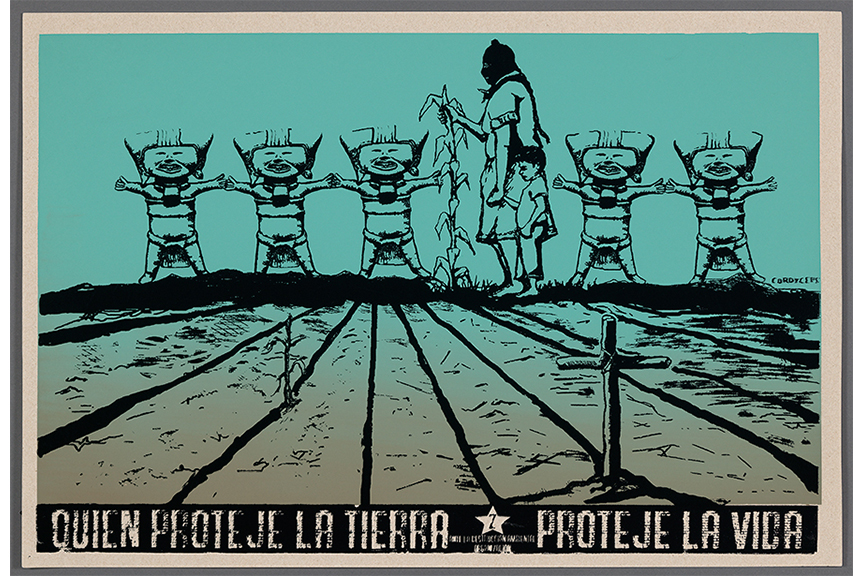 Poems and Prints: On Environmental Activism and Collective Gathering

Lexie Casais ’23 is an art history and English double major and a student assistant in the Cunningham Center this summer. Poems and Prints is a series of blog posts exploring thematic relationships between written and visual expression. In this post, Lexie discusses a print by Colectivo Cordyceps and a poem by Juan Felipe Herrera.

[Let Us Gather in a Flourishing Way]

By Juan Felipe Herrera, from his 2008 collection Half of the World in Light: New and Selected Poems [1]

Let us gather in a flourishing way

let us gather in a flourishing way

let us gather in a flourishing way

tranquilos in fields of blossoms

temprana estrella on our forehead

cielo de calor and wisdom to meet us

where we toil siempre

in the garden of our struggle and joy

let us offer our hearts a saludar our águila rising

seeds to give to grow maiztlán

In her book Undrowned: Black Feminist Lessons from Marine Mammals, Alexis Pauline Gumbs asks: “What could it mean to be present with each other across time and space and difference?” [2] This quotation begs another question: what does collectivity really entail? Is true collective action simply collaborating with the other humans physically around us, or is there something more? In this Poems and Prints pairing, Colectivo Cordyceps and Juan Felipe Herrera advocate for climate activism while opening wider definitions of collectivity.

With their print Quien Proteje la Tierra, Proteje la Vida, Colectivo Cordyceps emphasizes the importance of environmental preservation; the title translates to “One who protects the earth, protects life.” The imagery in the print, however, goes beyond this fairly straightforward message, revealing a complex understanding of a different kind of collectivity—one that spans generations. In the print, five traditional spiritual statues, presumably created centuries ago, stand alongside two human figures who tend to the crops in the field. The cross in the foreground unites the statues and the humans, showing how the contemporary people in the print carry on long-established traditions of environmental preservation. The people work together with the statues (and the inherited values they represent), and vice versa.

In his poem “[Let Us Gather in a Flourishing Way],” Juan Felipe Herrera emphasizes a similarly expansive collectivity. Herrera (b. 1948), who was named U.S. poet laureate in 2015, has cited the Californian landscapes near where he grew up as an important influence on his work. With this poem, Herrera turns those landscapes into allies. The piece, written half in Spanish and half in English, urges readers not to simply protect the “sunluz” (sunlight) or the grains, but to gather with them. The fields in which workers “toil” are not just a workplace but “the garden of our struggle and joy” (line 20). The physical place becomes one with human lives and narratives; the garden and the people are part of the same story, not separate ones.

Literary critic Stephanie Burt argues that Herrera’s poetry “[tries] to break down old borders”—borders between Spanish and English (and thus between the speakers of those languages), but also borders between humans and the natural environment. [3] Colectivo Cordyceps’ print dissolves similar boundaries between the contemporary and the ancient, advocating for an environmental politics that encompasses people and traditions that are no longer physically with us. What would happen if we saw statues, plants, crops, and clouds as allies, as partners? These two works suggest that we need to try living this way: living with the weeds, the dirt, the sky, the ancestors, the descendants. Living with one another, in the widest and wildest possible sense.

Special thanks to Lily Gurton-Wachter, Associate Professor of English Language & Literature at Smith (and my English major advisor!), for introducing me to the writing of Alexis Pauline Gumbs. Many of the ideas expressed in this post originated from class discussions in the course I took with Lily this past spring, “Environmental Poetry and Ecological Thought.”

[1] Juan Felipe Herrera, “[Let Us Gather in a Flourishing Way],” Poetry Foundation, accessed May 27, 2021, https://www.poetryfoundation.org/poems/52283/let-us-gather-in-a-flourishing-way. Poem originally published in Juan Felipe Herrera, Half of the World in Light: New and Selected Poems (The University of Arizona Press, 2008).