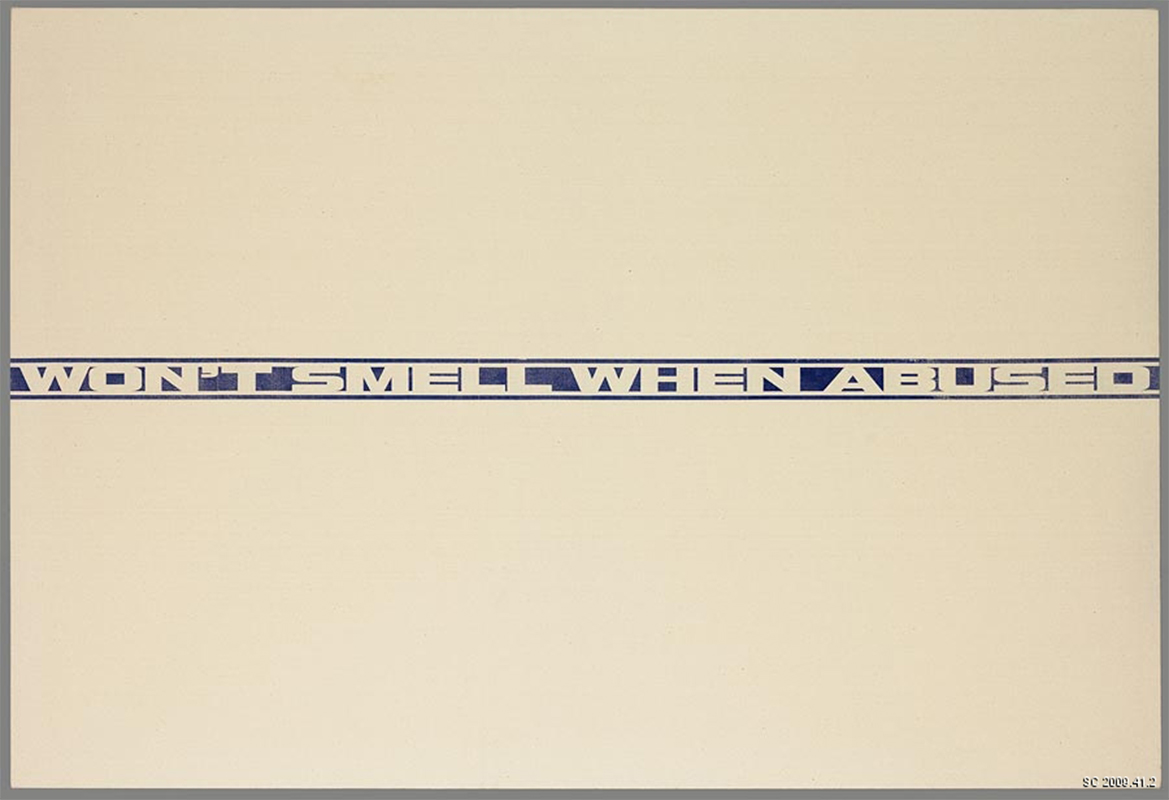 “WON’T SMELL WHEN ABUSED.” “IF IT’S GOT TITS OR WHEELS IT’S GONNA GIVE YOU PROBLEMS.” “BEND OVER, I’LL DRIVE.”

These are lines from Marlene McCarty’s Crash and Burn series. Each line is printed on a blank canvas, almost five feet across. Smith College Museum of Art owns Perfect MX Girlfriends (Won’t Smell When Abused). Written in bold, eye-catching capital letters, McCarty’s piece confronts viewers with its scale and its vulgarity.

I’ll admit, when I first saw this piece, I ran the full gamut of emotions– disgust, confusion, outrage. The title repulsed me. I didn’t understand how it had made it into Smith’s collection. Good art makes you feel something. I was definitely feeling something; now I wanted to find out why this was art. What was McCarty trying to say? What reason could she have for saying it? And why would she choose to say it like this?

A simple Google search of Marlene McCarty shows that she is not afraid of controversy, violence, and obscenity. She has made her name dealing with murder and sex in her art, two subjects that put off most viewers right from the getgo. She blows up the notion of palatability in art, especially art made by women, with her overtly sexual, violent, or otherwise offensive works. It is the way she deals with these topics that makes her interesting. McCarty is not creating controversy out of nowhere; she is highlighting social issues that exist in our society that often go unremarked upon. All she does is take these issues and put them in a space where they cannot be ignored.

This piece is supposed to make you uncomfortable. It is supposed to make you think about what you ignore and what you normalize. This is a found text, which means that these aren’t even McCarty’s words. This line– “Won’t Smell When Abused”-- was lifted directly from a Car and Driver magazine. In fact, all of the lines in this series were taken from car magazines or coverage of the Gulf War. All of the lines in this series had been printed and published– and it wasn’t all that long ago. This piece is from 1991. In 1991, this line was published in a magazine, and everyone involved thought it was okay.

“So much of art now is dismantling the power structures of violence, or the umbrella of violence, that has been a part of the art world for a long time,” McCarty said. “By perpetuating that hard and electrified moment, that was the way you got attention and were able to have a meaningful conversation about content.”

Those conversations are especially important when they are uncomfortable. McCarty’s piece forces us to reckon with the sexist language in everyday media. She highlighted these vulgar, offensive throwaway lines, ironing them onto large canvases and making them into art to start a conversation about content. To what extent can we reclaim these derogatory messages? How can we dismantle the power structure that creates discrimination like this? In exploring the use of language, McCarty is asking us how far we have come in combatting sexism. Looking at it now, it feels to me as if she is reaching across time to ask how far we still have left to go.