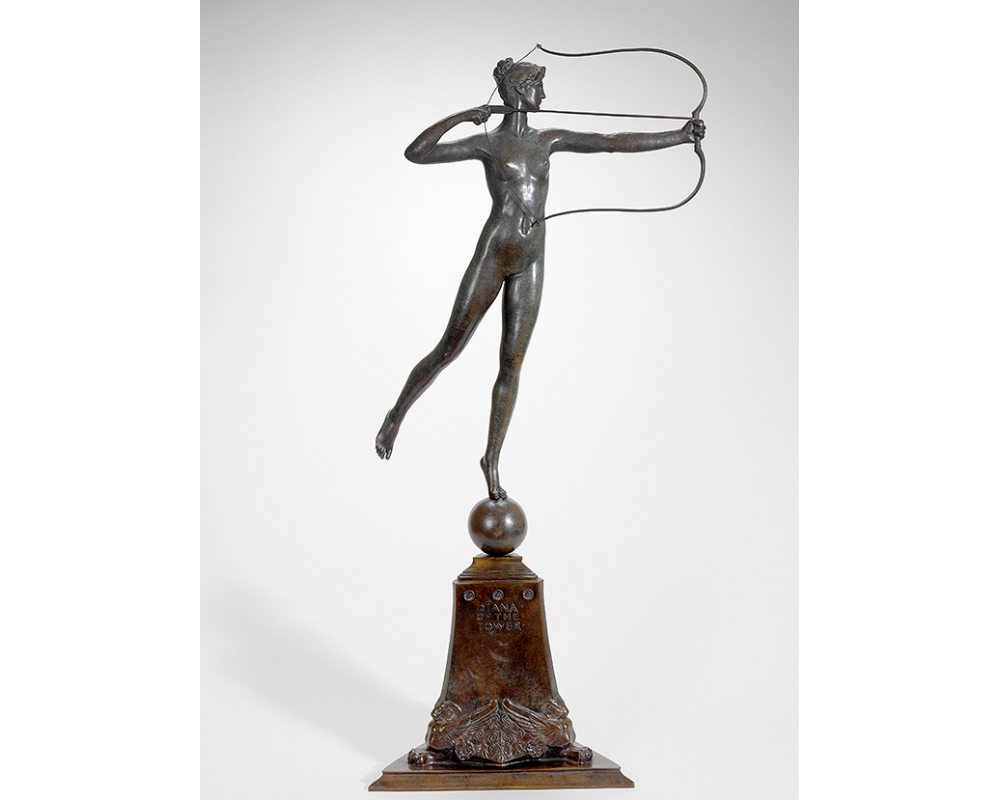 Guest blogger Matthew Blanchard served remotely as a curatorial intern under the SCMA's Curator of Painting and Sculpture Danielle Carrabino during the summer of 2020. He is a current graduate student at UMass Amherst (MA '21) where his research specialties are Greco-Roman and 19th century European and American art.

Augustus Saint-Gaudens’s Diana of the Tower (1899) is one of the SCMA’s many treasures of American art. Saint-Gaudens, America’s foremost sculptor of the late 19th century, specialized in sculpting mythological figures from ancient Greece and Rome. This sculpture is one of his most renowned masterpieces. It depicts a nude Diana, the Roman goddess of the hunt, balancing on one foot as she prepares to fire off an arrow from her bow. In terms of style, Saint-Gaudens was inspired by ancient sculptures of Roman gods and goddesses, but this one is a little different. Unlike his other sculptures, this one has a secret: it moves. A statue is usually a static object, and stands firm in its place, but not this one. When art handlers recently moved the Diana to its new home in the late 19th-century American Art gallery, they discovered this interesting quirk for themselves. The Diana has a knob on its pyramid-shaped base, and when someone turns it, Diana spins around. Her foot, resting on a little sphere, twirls beneath her and her graceful figure spins above. She points her bow and arrow all around, and the goddess is seen from all sides. This is surely a beautiful example of American Neoclassical sculpture, and it shows the amazing talent of Saint-Gaudens as a sculptor, but this little trick makes this already-interesting sculpture even more alluring.

Spinning Diana of the Tower

The question, of course, is why? Why does this statue of Diana spin? The answer lies in the title of this sculpture: Diana of the Tower. “The Tower” refers to a tower of the Madison Square Garden, where the original Diana sculpture was placed. Saint-Gaudens was commissioned to sculpt a statue for the weathervane at the top of the tower to indicate which way the wind was blowing. So, Saint-Gaudens created the Diana of the Tower. Whichever way her bow and arrow pointed, that was the direction of the wind.

The SCMA's version, however, is not installed as a weathervane, and the viewer does not get the same sense of movement. Saint-Gaudens planned for this. He designed this version to spin with the turn of a knob, so his sculpture can be experienced as it was intended. It’s an interesting little story for a wholly unexpected feature of an American masterpiece.