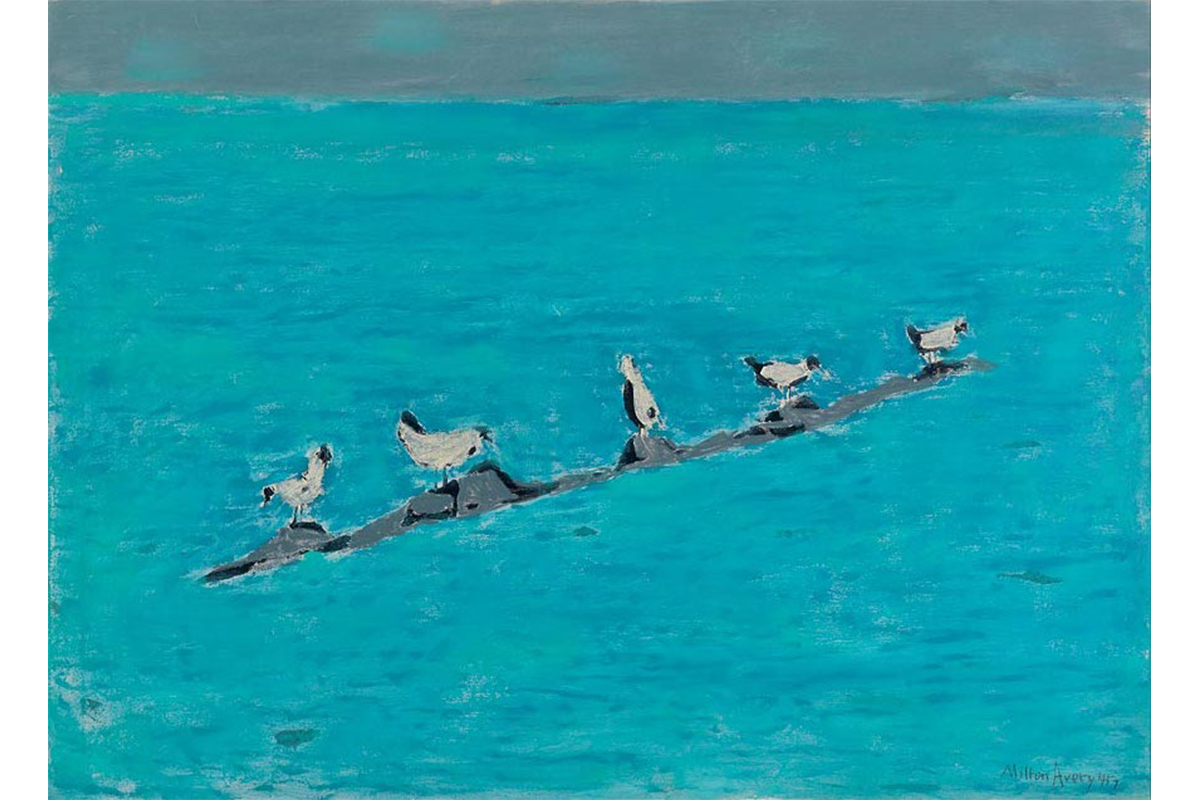 Gulls and Sea
Milton Avery
American,
Gift of Mr. and Mrs. William A. Small Jr. (Susan Spencer, class of 1948) on the occasion of the 50th reunion of the class of 1948

Guest blogger Matt Cummings is an artist and Assistant Preparator at SCMA. In this contribution to SCMA's Staff Picks series, Matt reflects on a work in the collection by Milton Avery.

At some point nearly every summer growing up, my parents would pack me and my two brothers into the family minivan and bustle us off to a week or—if we were particularly lucky, two—of vacation in Cape May, New Jersey. We’d inevitably pack way too many things—full tubs of Lego, board games we’d never play, every bit of beach accouterment known to man—and still manage to forget something and have to come back five minutes into the drive. Part of our tradition was to take the ferry across the Delaware Bay from Lewes, Delaware, to Cape May to conclude what seemed, to us kids anyway, to be an agonizingly long car journey from Pittsburgh. The ferry gave my parents a break from driving and from being stuck in the car with three boys. A feature of the ferry ride were the masses of seagulls that would flock to the first french fry proffered from the hands of a small child. When we were little, one of our favorite books was The Lighthouse Keeper’s Lunch, a story about a wily lighthouse keeper’s wife figuring out ways to get lunch to her husband each day while outsmarting the gulls that came to eat it (decoy mustard sandwiches, if you were wondering). We’d quote the book as we were having snacks and throwing food to the seagulls, almost certainly annoying everyone else on board. Seagulls were a central part of the whole experience. We knew we were getting close when we could hear them calling as we parked at the ferry terminal, then we’d chase them around on the beach when we were younger and shoo them away from picnics when we were older. My dad is a birder and he would sometimes wake us up early to take guided walks through the marshes where we’d do our best to distinguish rarer birds from the standard gulls, learning the differences between how a gull looks from a tern or an osprey.

This is all a longwinded way to say that when I came to Smith and saw Milton Avery’s painting, Gulls and Sea (1957), I loved it at first sight. I love the whimsical composition and the fractured way it is painted, reminiscent of how one might see birds in the distance through the haze of ocean or over heat waves coming off a beach. While Avery’s bright blue ocean isn’t quite the gray green of the Atlantic that I was used to on the coast of New Jersey, the sight of seagulls managing to fill any and all available perches is a nostalgic and beloved one for me. Like much of Avery’s painting, the gulls hover in a space between figuration and abstraction, crudely yet expertly brought to life by deftly placed daubs of black and white in a sea of blue and gray.

As we all got older and scattered across the country it became harder to arrange our annual trips to the beach. This May, after a year in which I was unable to see them due to the pandemic, my parents booked a house for a couple weeks. They hadn’t been back to Cape May in several years and they invited us to join them for as long as we wanted now that we were all vaccinated. The rental was earlier in the year than the vacations of my childhood, and the ocean was still cold. Cape May is a vital migration stop for millions of birds and late May is a particularly important period for them, because it is when horseshoe crabs spawn, coming up into the warmer shallow water and laying eggs in the sand. The birds pause and refuel on horseshoe crab eggs, before continuing north to the Arctic. During this time, New Jersey’s Department of Fish and Wildlife closes large portions of the beaches so the exhausted birds can stop undisturbed. But the migrating birds are not the only ones taking advantage of the crab spawn; every seagull in the vicinity joins in as well. I was delighted to join my parents for a few days this year and we spent the majority of that time looking for rare migrating shore birds, but mostly seeing seagulls. Thousands and thousands of them, crammed onto small beaches, filling them from end to end. It was deafening. So picture my dad and I, standing in raincoats on this year’s unseasonably cold and wet Memorial Day weekend (Mum wisely stayed in the car) the strong wind pushing us away from the beach, not so subtly telling us to give up and go home, wiping the rain from our binoculars as we tried to pick out a ruddy turnstone from a crowd of three thousand gulls. Attempting to find one bird amongst thousands through raindrop speckled binoculars reminded me of Avery’s gulls perched between abstraction and figuration. It was great. I can’t wait until next year.