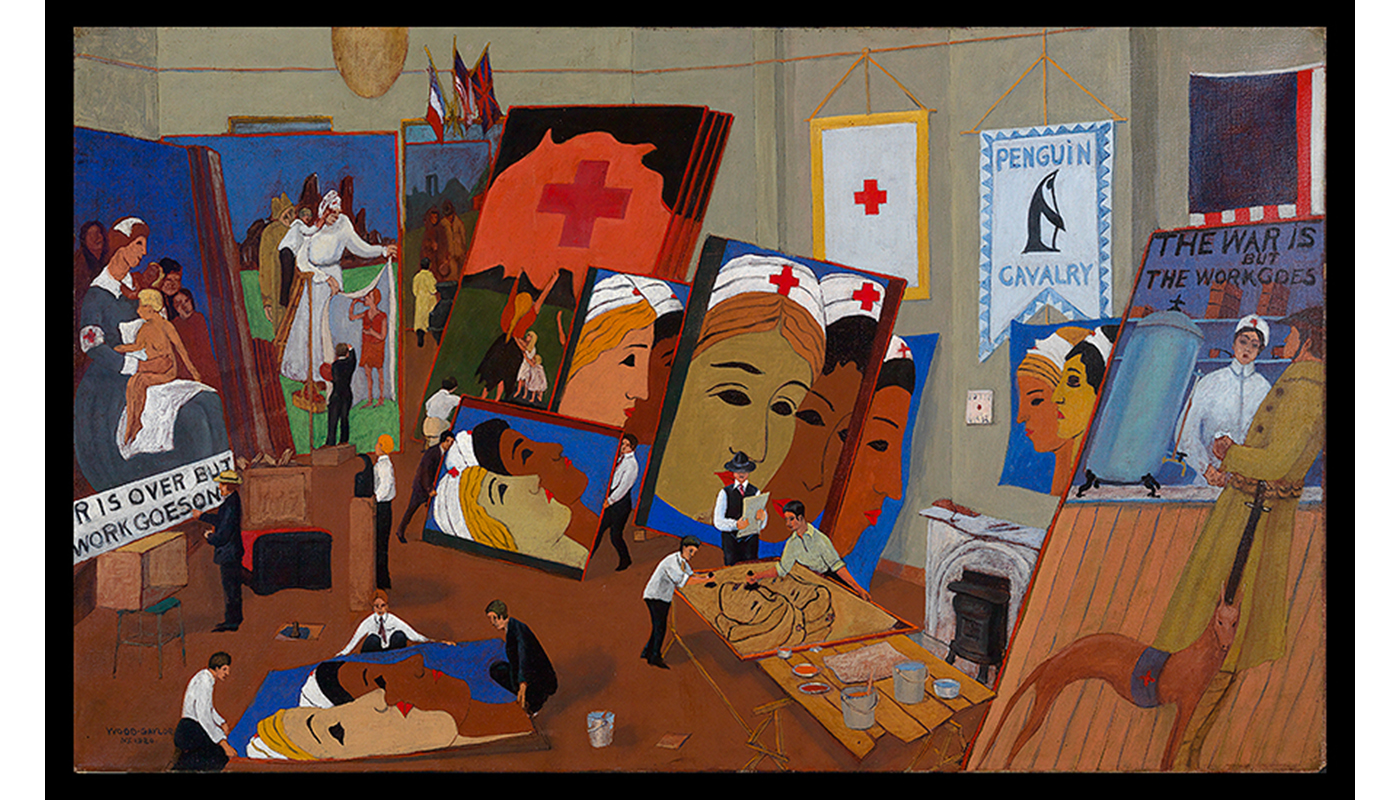 SCMA’s painting by Wood Gaylor, Posters, is summering on the coast of Maine this year. It’s meeting up with old friends for the exhibition, Art’s Ball: Wood Gaylor and American Modernism, 1913–1936, at the Ogunquit Museum of American Art (on view from July 30 to October 31, 2021).

As for so many of us, the pandemic delayed this summer vacation. Art’s Ball opened in the winter of 2020 at the Fleming Museum of Art at the University of Vermont, where it was organized by Andrea Rosen, the Fleming’s curator and a Smith alumna.  Because of the pandemic, the exhibition closed early and its planned presentation at the Ogunquit Museum was postponed for a year.  A silver lining of this disruption is a terrific series of short videos made by Andrea and her colleague, Curator of Education Alice Boone, that allows viewers to explore the exhibition from home (Posters is discussed in episodes 2 and 4).

Art’s Ball gives valuable and overdue scholarly attention to the work of Wood Gaylor (1883–1957), an artist who both participated in and documented the development of American modernism from the 1910s to the 1930s. Gaylor painted vibrant and theatrical scenes of New York’s progessive artists at work and at play. He developed a simplified style that took its cues from American folk art, with its vivid colors, flattened space and forms, and decorative patterning. His paintings record art world events—arts balls, auctions, dinner dances—while their aesthetic reflects influences that shaped a distinctive American modern style.

Gaylor’s festive scenes showcase groups like the Salons of America that were promoting contemporary art, providing exhibition opportunities for artists and, in the process, creating community among them. Many of his subjects derived from the activities of The Penguin, an artists society founded in 1916 by Gaylor’s friend and mentor Walt Kuhn. The Penguin offered its members weekly figure drawing sessions, organized solo and group exhibitions, and created a lively social scene around parties, dinners, outings, and dance and musical performances.

SCMA’s painting shows a different dimension of The Penguin’s undertakings. In late 1918 its members rallied to support the American Red Cross’s annual Christmas Roll Call fund drive by painting seven-by-ten-foot banners (the Posters of the painting’s title) that were displayed along Fifth Avenue between Twenty-Eighth and Fifty-Sixth Streets. Posters captures this work in progress, with Walt Kuhn (in the black hat) supervising. Gaylor included himself twice: he’s the man to the left of Kuhn transferring the outline of a poster and he appears again at the bottom left stretching a canvas. Among others participating were Louis Bouche and Charles Farrand as well as artists and illustrators from beyond the Penguin circle, including Edward Hopper, Maxfield Parrish and Joseph Stella. The imagery and text on the posters acknowledged the just-concluded First World War and the important work of the Red Cross. This public social relief effort, valorizing the contributions of healthcare workers and enacted while the 1918 flu epidemic was raging, has a renewed relevance and poignancy seen from the vantage point of our own pandemic times.

The visit of Posters to Ogunquit this summer is a fitting return to a place that nurtured Gaylor’s art and the community of artists he portrayed. He and many of his friends from the New York art scene frequently spent summers at the colony established by artist and critic Hamilton Easter Field, who bought up fishermen's shacks around Ogunquit’s Perkins Cove and rented them inexpensively to visiting artists. In addition to providing fun, relaxation, and coastal beauty, the Ogunquit colony furthered the creative growth of its guests, as they critiqued each other's work, assimilated the aesthetics of the early American art and artifacts they collected, and debated the purpose and meaning of art in their lives and times.

As a testament to Field’s influence, after his death in 1922 Gaylor helped to create a new artists organization, the Hamilton Easter Field Art Foundation, which was dedicated to advancing Field’s priorities, including creating opportunities for emerging artists to have their work seen and collected. A centerpiece of the Foundation’s activities was an annual dinner-dance-auction (which was, naturally, captured in a Gaylor painting). Half of the proceeds from works sold went to the artists, while the other half was used to form a Field Foundation Collection of artworks by the group’s members and their contemporaries, such as Stuart Davis and Marsden Hartley.

That collection is now preserved at the Portland Museum of Art in Maine, which is where I first encountered Wood Gaylor’s work when I joined the staff as Curator of American Art in 1992.  The Field Foundation Collection includes his Union Square Fire Brigade, a depiction of a raucous and somewhat surreal dinner thrown in honor of sculptor Constantin Brancusi when he visited New York in 1926. I was amazed and delighted by this window onto a community of artists and the creative, convivial, occasionally hilarious, always purposeful world they created. After the isolation of the past year, Gaylor’s paintings offer an uplifting reminder of the power of social connection. I’m looking forward to returning to Maine this summer to see Art’s Ball and to savoring the pleasures and possibilities of being together again.