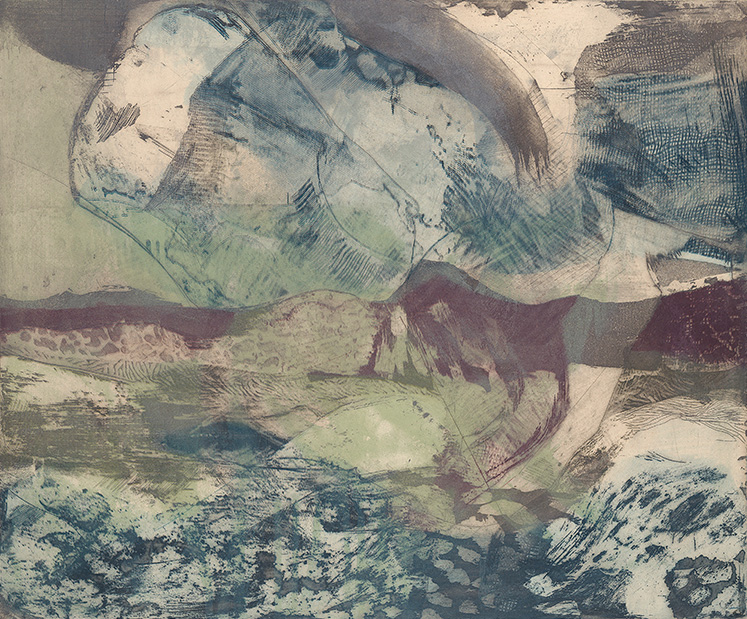 Guest blogger Sandy Lillydahl '69 was Taj Diffenbaugh Worley's senior year roommate and fellow religion major at Smith. She retired from curating the Map Collection in the library of the University of Massachusetts, Amherst, in 2016.

Several of Taj Diffenbaugh Worley’s prints currently on view at SCMA (through June 23, 2019) connect art, religion, and concern for the state of the world through visual interpretation of the Hopi prophecies. The Hopi Tribe is a sovereign nation located in northeastern Arizona. As a religion major, Taj Diffenbaugh Worley studied the Hopi prophecies, and attempted to represent some of their imagery in her artwork. The Hopi elders have repeatedly attempted to present the prophecies to the United Nations beginning in 1948, and their efforts were especially highlighted in the 1970s in numerous magazine articles and books.

Taj’s print Augury reveals a turbulent landscape with boiling seas and mountains reddened with burning heat. The source of this vision is a Hopi elder whose head appears in the sky and whose gaze is focused on the ashen black heart floating in a white cloud.

The passage below, which describes this part of the prophecy is excerpted from a message from Hopi elder Chief Dan Evehema (Hotevilla, Arizona, 1893-1999):

"Hopi, the younger brother, was instructed to cover all land and mark it well with footprints and sacred markings to claim this land for the Creator and peace on earth. We established our ceremonials and sacred shrines to hold this world in balance in accordance with our first promise to the Creator. This is how our migration story goes, until we met the Creator at Old Oraibi (place that solidifies) over 1000 years ago. It was at that meeting when he gave to us these prophecies to give to you now at this closing of the Fourth World of destruction and the beginning of the Fifth World of peace.

He gave us many prophecies to pass on to you, and all have come to pass. This is how we know the timing is now to reveal the last warnings and instructions and to wait for Older Brother, who went east, to return to us. When he returns to this land he will place his stone tablets side by side to show all the world that they are our true brothers—when the road in the sky has been fulfilled and when the inventing of something, in Hopi means, gourd of ashes, a gourd that, when it drops upon the earth will boil everything within a large space and nothing will grow for a very long time."

Garden of Illusion, created a few years after Augury displays a close visual correspondence to this passage from the Hopi Message to the United Nations, delivered by Hopi elder Thomas Banyacya, Sr. (Kykotsmori, Arizona, 1909–1999) on December 10, 1992:

This rock drawing shows part of the Hopi prophecy. There are two paths. The first with technology but separate from natural and spiritual law leads to these jagged lines representing chaos. The lower path is one that remains in harmony with natural law. Here we see a line that represents a choice like a bridge joining the paths. If we return to spiritual harmony and live from our hearts, we can experience a paradise in this world. If we continue only on this upper path, we will come to destruction. It's up to all of us, as children of Mother Earth, to clean up this mess before it's too late.

The word "paradise" comes from the Persian word for garden, which further links Garden of Illusion to the prophecies. The upper section of the central rectangle in this work features a chaotic myriad of squiggly lines recalling the line "these jagged lines representing chaos."

The lower section of the central rectangle features a balanced, orderly, and harmonious image of a classic labyrinth, the labyrinth being found on ancient art in a number of widespread cultures, from Minoan to Celtic to South Asia to Native American cultures relating to the quote "The lower path is one that remains in harmony with natural law." This labyrinth reminds me of Taj's courses in Anthropology and her summer vacation work on an archaeological site in Israel.

Between these two sections there is a connecting section in which the dense chaotic lines have widened out to be more visually comprehensible: "Here we see a line that represents a choice like a bridge joining the paths."

This Hopi rock drawing prophecy would have been known to anyone like Taj who was familiar with the larger Hopi prophecy. The lines and paths of harmony and chaos in the prophecy may provide an insight into Taj’s later works also featured in this exhibition.