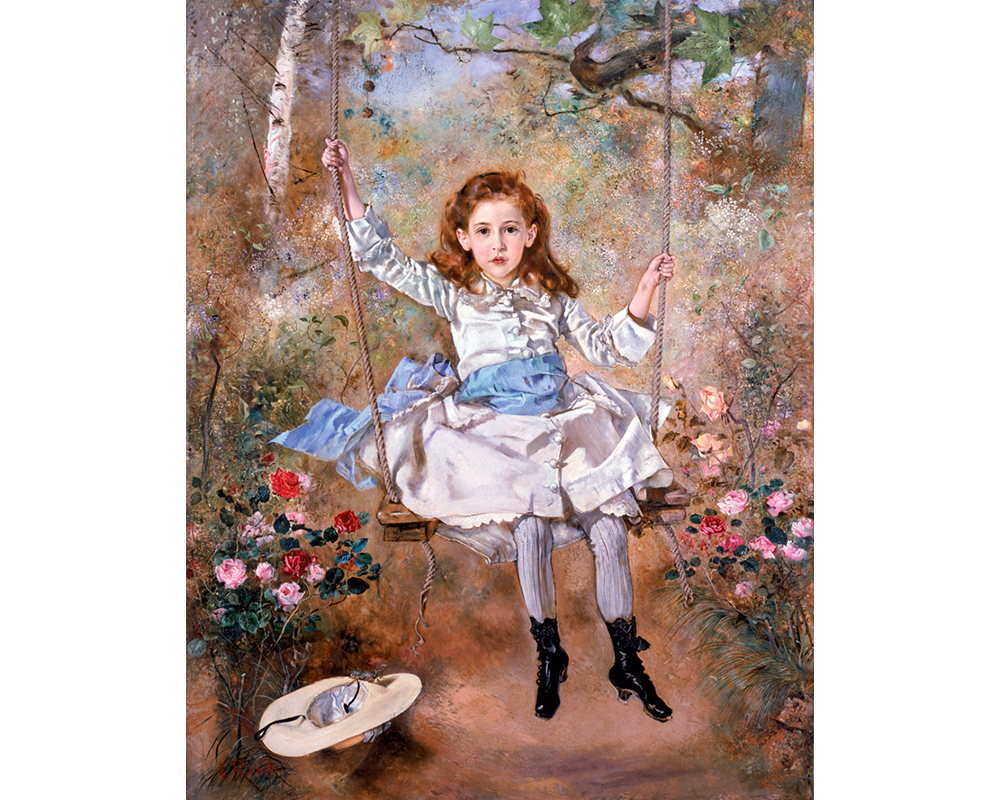 The Tryon Prizes for Writing and Art, 2021

Each year, two juries award monetary prizes to current Smith students for outstanding writing and art. Writing may take any form including a thesis, essay or poem and must be related to art seen at SCMA. Art submissions are limited to time-based art including installation, performance, video, sound, digital, internet, and interactive. We are excited to announce the 2021 recipients of the Tryon Prizes for Writing and Art!

This year, Alyssa Schams ’22 was awarded the writing prize for a paper she wrote for the course Women and Gender in Modern Europe 1798–1918. Congratulations, Alyssa! Alyssa reveals more than meets the eye in Anton Romako and Jewishness: Girl on a Swing and Beyond. Here's an excerpt:

“‘Enchanted’ was the word that came to mind for me when I first saw Anton Romako’s painting, Girl on a Swing. The painting looks like a scene out of a fairy tale, and suggests an idyllic, carefree childhood of days past. However, what this painting does not show is the subject’s (Olga von Wassermann’s) Jewish identity, which drastically altered her life’s course. Although Romako himself was not Jewish, the theme of Jewishness echoes throughout the history of his work. When the Third Reich targeted Jewish individuals, they targeted not only Romako’s subject, Olga, but Dr. Oskar Reichel, the most prolific collector of Romako’s paintings at the time. Girl on a Swing is intriguing at first sight, but the contrast between the charmed, pure imagery of girlhood it portrays and the stark, brutal reality of the Nazi-led persecution suffered by the subject adds greater depth to the painting.” 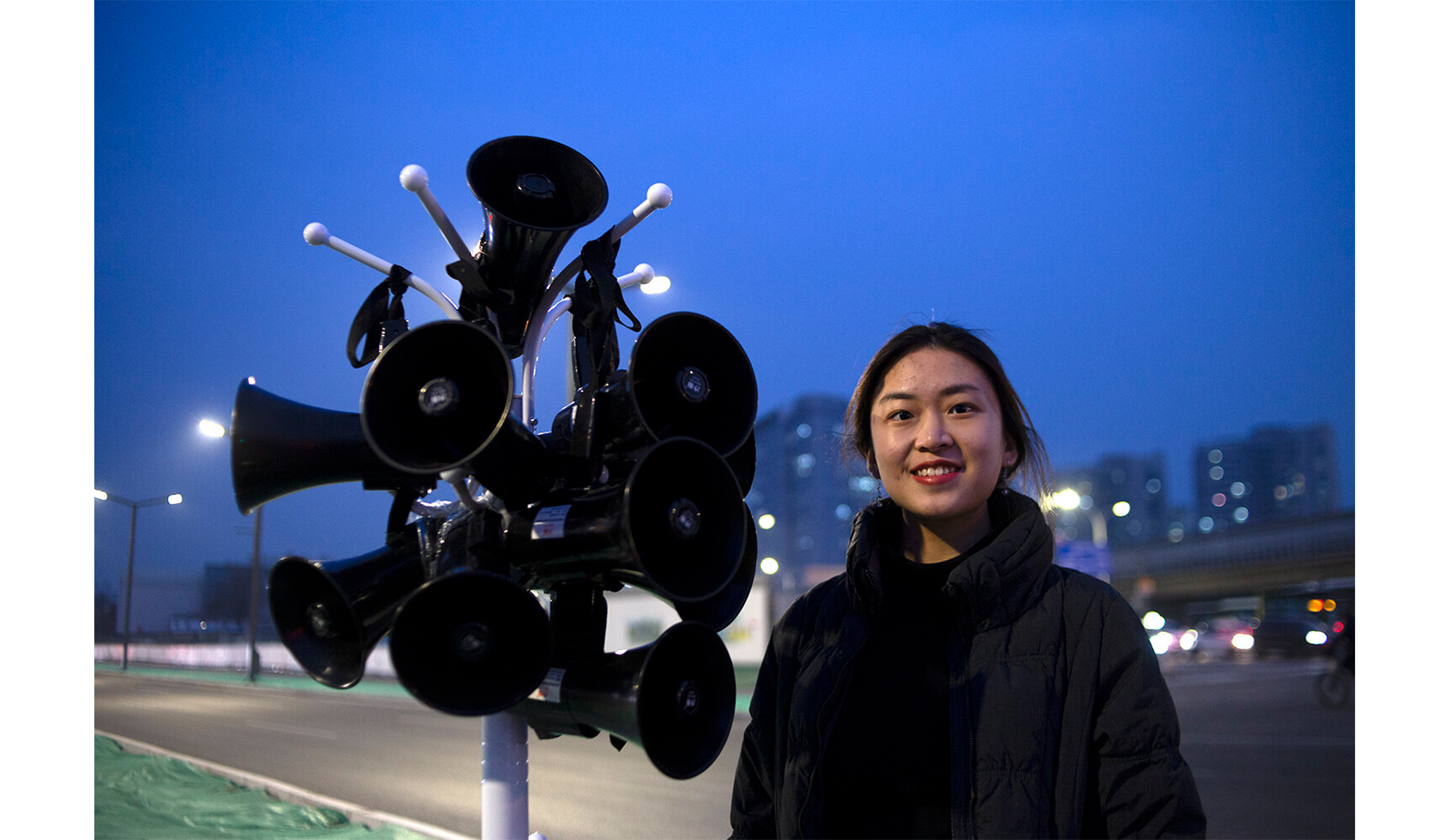 Lucy Xiao Chuan Liu ’21 with her award-winning installation Testimonial Loudspeakers installed in Beijing. The work was created as part of a Studio Art Honors Thesis.

"Testimonial Loudspeakers is a social experiment: an attempt of using artistic intervention to evoke the psychology of a place. I installed a coat-hanger full of loudspeakers at the center of a major crossroad in my suburb in Beijing. Each speaker repeats a different strange dream I had about death during a period of depression. I played all the speakers at once. They were extremely loud, and a handful of people stopped to watch. Eventually, the traffic police came, afraid it was some sort of propaganda.

"The societal context is important to understanding why the traffic police were concerned enough to intervene. Firstly, loudspeakers were an important tool of political propaganda in the past, and still are in some rural areas today. They spread the news moderated by the government and directed people to work in the fields. People instinctively link loudspeakers with authority and leadership in group activities that take up the public sphere. Secondly, this is a city that sees importance in guiding morals. The streets are lined with a wealth of billboards touting traditional as well as contemporary morals. I would like to echo the platonic idea (The Republic, Book X) that a city can be guided by good morals and can be corrupted by individuals with bad morals. Last, this crossroad under construction is part of the nonstop town renovations that have taken place for as long as I can remember. Collective morals of a formerly disadvantaged nation proudly working hard toward quality life shaped a pragmatic conformism in the culture. In the circumstance I created with the artwork, I am an individual with an inappropriate level of social influence who places a personal narrative about disorder in a prospering society that seems to follow perfect order. It is not surprising that this can seem anarchical to the police.

"I did not intentionally advocate any political point of view when I created this work. I want my work to take on a life of itself, to simply reveal societal truth through demanding interaction. The humorous encounter of 12 speakers and a coat-hanger was informed by the Readymade.”

Explore Lucy's website here. You can see video documentation of Testimonial Loudspeakers (:48) below: 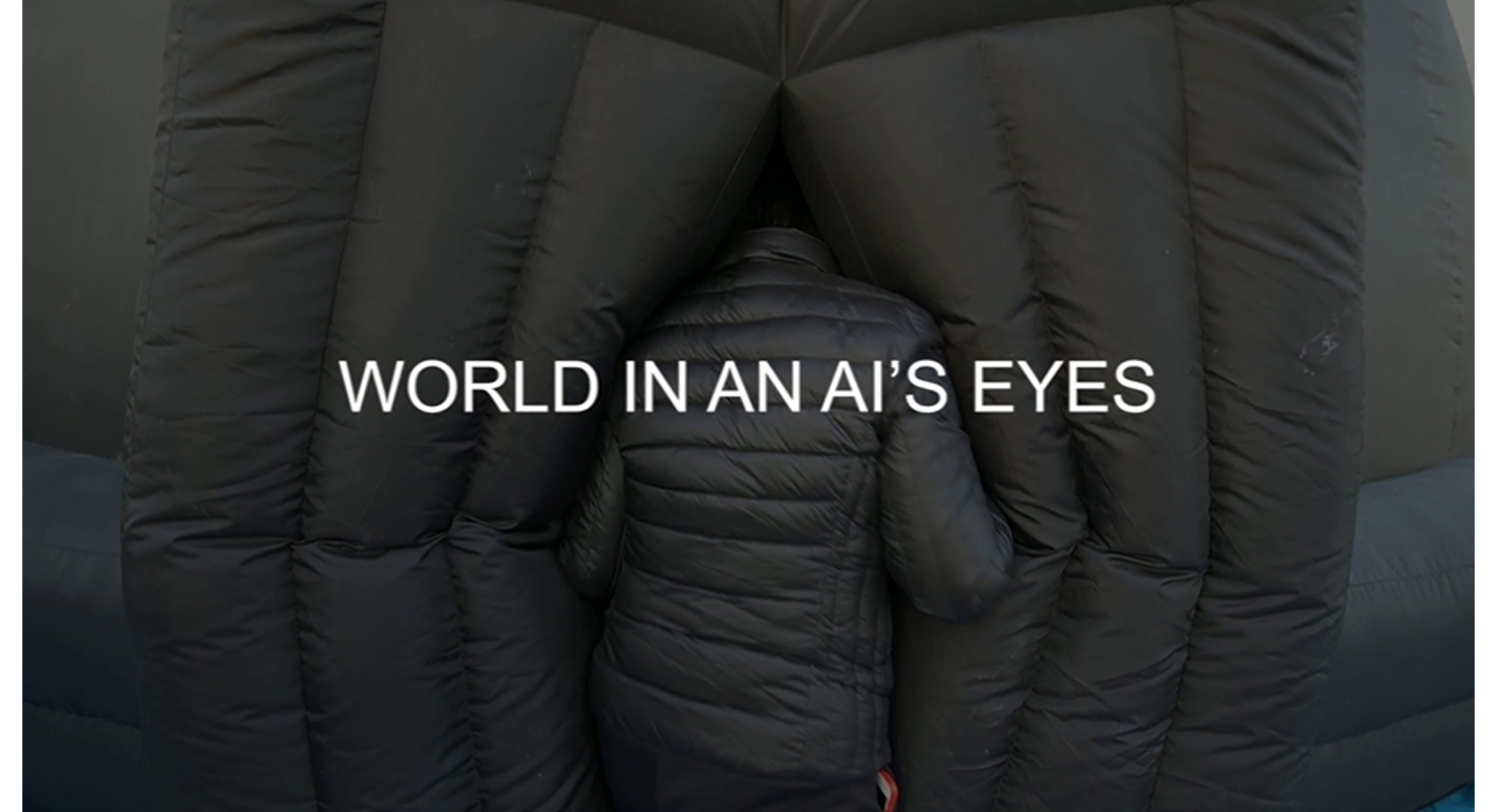 Still from Yingke Wang's video of her installation World in an AI's Eyes. 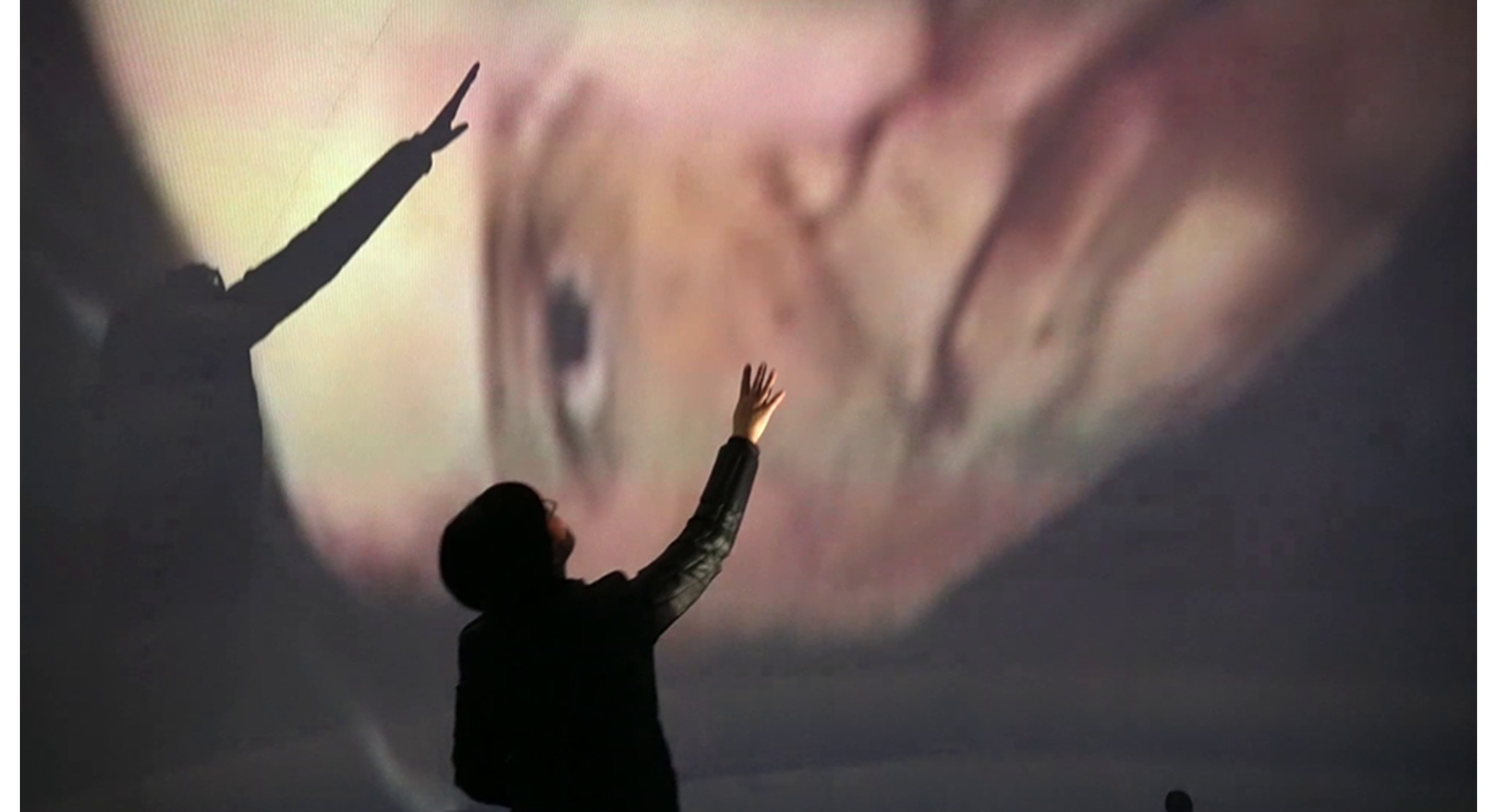 Still from Yingke Wang's video of her installation World in an AI's Eyes.

Yingke Wang ’23 created World in an AI's Eyes for a self-directed Special Studies in Computer Science with Professor Nicholas Howe.

“World in an AI’s Eyes is a generative artwork and video installation. The work echoes the connections between artificial intelligence (AI) and humanity, presenting the metaphorical learning process of AI with an AI-related algorithm – the generative adversarial network. AI shows an interesting human-like learning strategy, which begins with the machine’s observation of a large number of real-world items from an ImageNet dataset. I then trained the machine to ‘interpret’ and ‘draw’ those items through StyleGAN 2 from scratch, as if training children to learn new concepts. Then with projection and interpolation algorithms, I depicted the ‘evolution’ and ‘expansion’ of an AI’s cognition of the world as a human might. With my own interpretation, I show a relation between humans and AI and encourage the audience to think about the nature of cognition and consciousness.”

View Yingke’s summary and documentation of World in an AI’s Eyes (4:47) below: 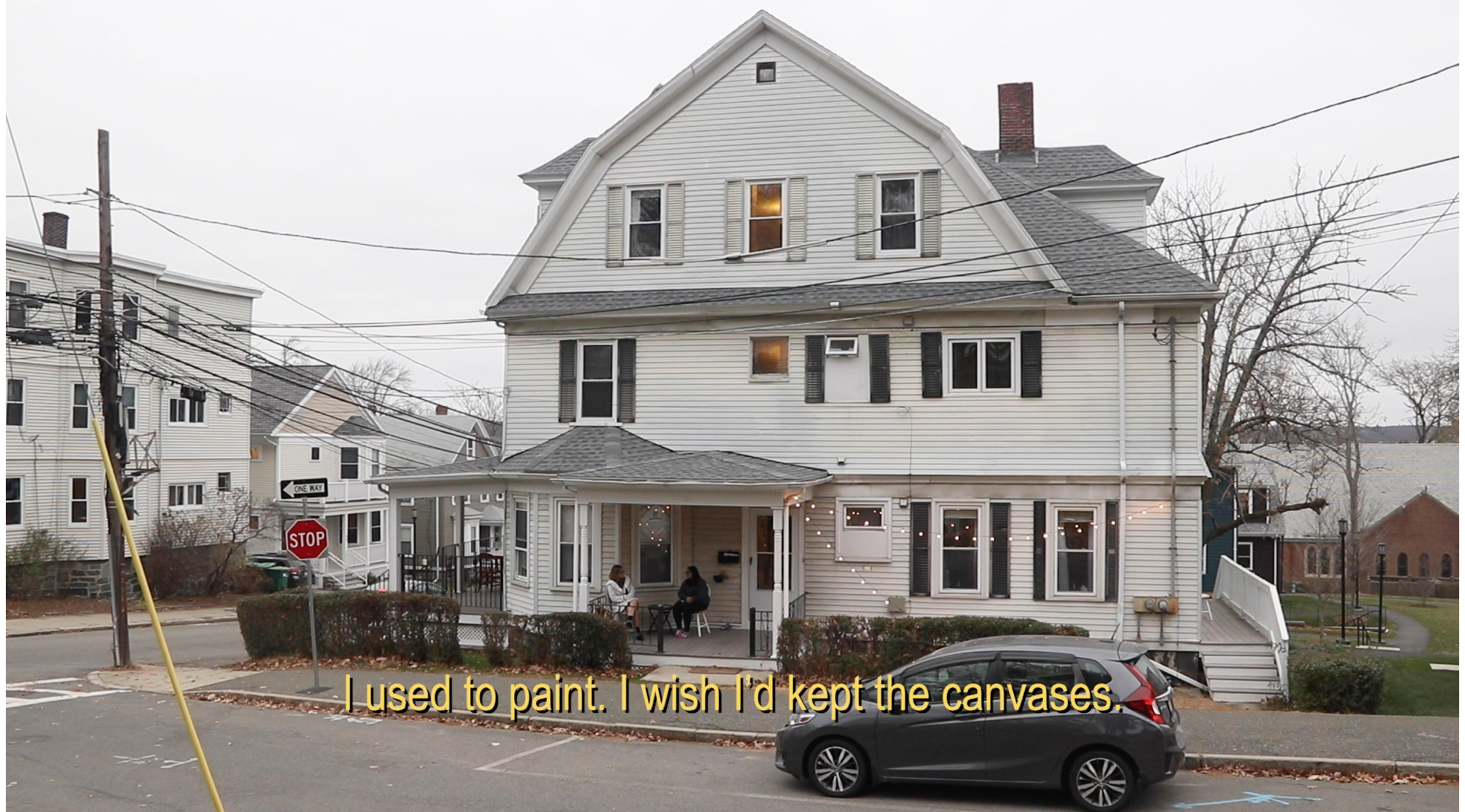 Still from the film Together by Liliana Wollheim-Martinez. 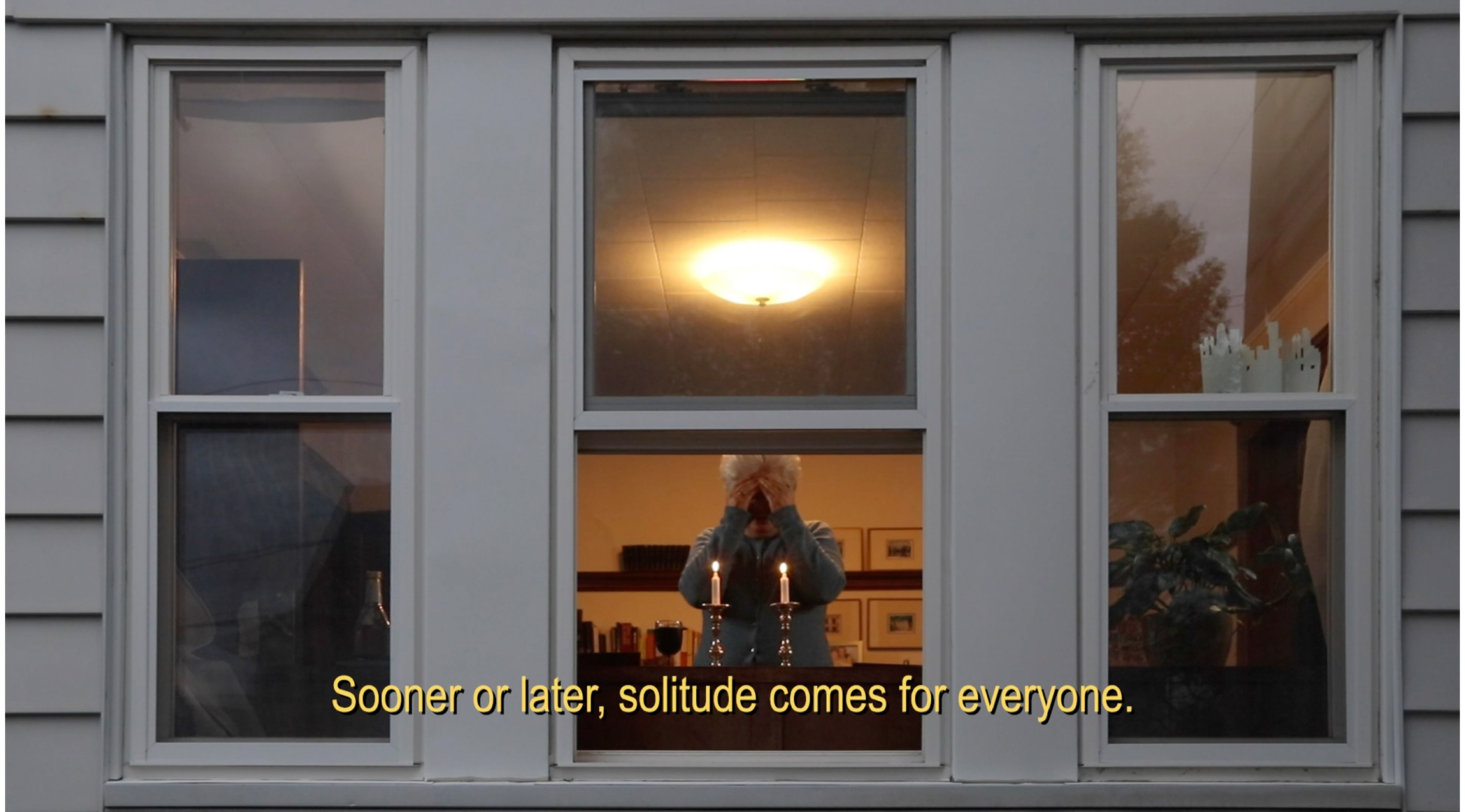 Still from the film Together by Liliana Wollheim-Martinez.

The award-winning short film Together was created by Liliana Wollheim-Martinez ’23 as a final project for Intermediate Digital Media with Professor Lucretia Knapp. Together received the Wurtele Center’s 2021 Amplify Award for public art.

“In my short film Together, I intend to create a picture of what it means to coexist separately yet in parallel as neighbors during a time in which so many of us are more isolated than ever before. The inspiration for this project came from the fact that I had been spending all of my time at home, as had many of my neighbors, including the one in the house right next to mine. He moved in shortly before the pandemic started, so I never got to know him or even speak with him - but from my house, I would see him every day. I was fascinated by this concept and found myself thinking about him often, due to how much I saw of him through his windows. Because of how hyperaware I was of my own daily activities and movements as well, I began to feel like the two of us were living together. How strange to live together and yet somehow never interact. In my film, I intend to capture that dichotomy. I also aim to make Together universal, so that even as we move beyond the quarantine, it can still perhaps be relevant - the film explores the broader themes of solitude, time, and connection to those around us.

"The captions are excerpted from a short piece I wrote, also titled ‘Together.’ With the inclusion of text, I aim to create a narrative thread that runs through each window, separate though they are. The houses, bodies, and even music of my generous neighbors were a medium through which to illustrate my words in a way that I never could have done on my own. These lines are no longer mine alone, but ours together.”

Congratulations to all of the 2021 recipients of the Tryon Prizes for Writing and Art!