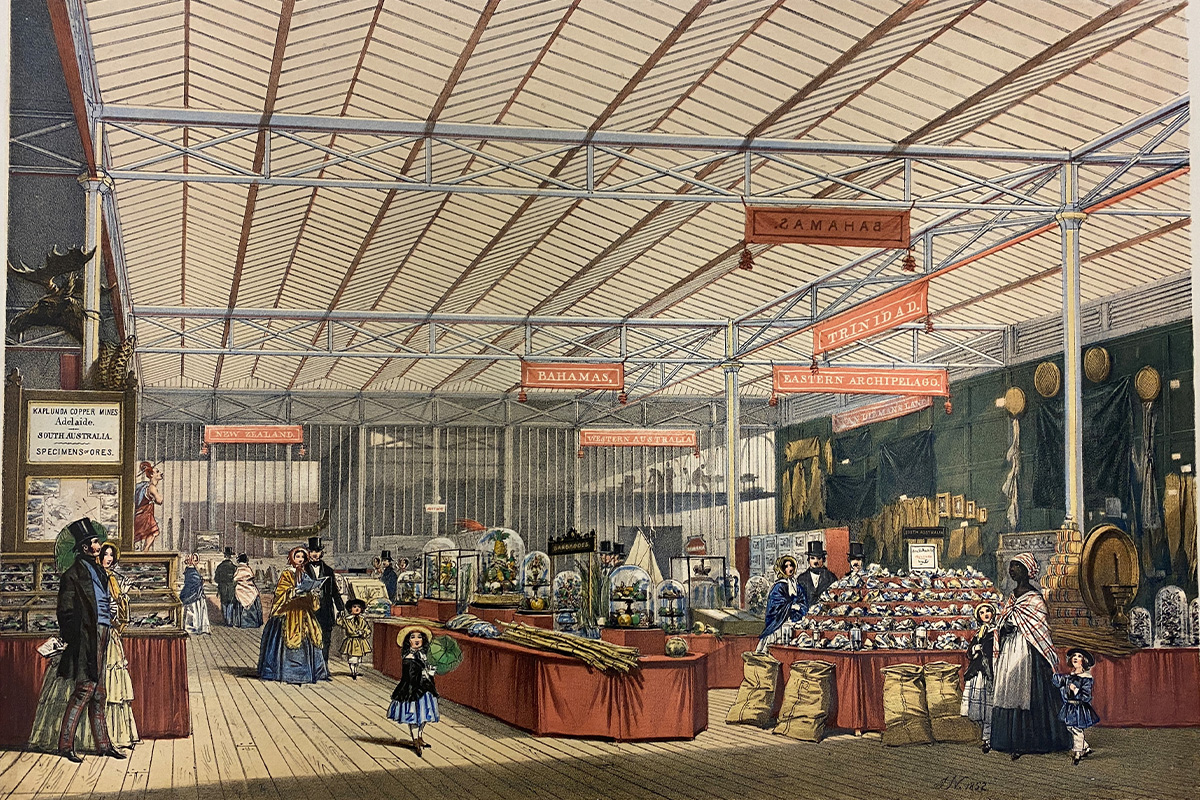 Visiting the Crystal Palace with the Dickinson Brothers

Grace Ettinger '22 is a student assistant at SCMA's Cunningham Study Center. In this blog post, she explores the complicated colonial legacy of the 1851 World's Fair in London using a print by the Dickinson Brothers from the collection.

In 1851, London hosted the World's Fair, called the Crystal Palace Exhibition. Along with presenting innovations in technology and culture, the Crystal Palace served as a popular survey of the colonial pursuits of Europe in the mid-nineteenth century. Many who attended the fair (or who did not, but wanted to experience it) bought mementos and keepsakes, including artist-made images. The Dickinson brothers, second generation English printmakers, created a series of lithographs documenting the exhibit of international goods. The Cunningham Center for the Study of Prints, Drawings, and Photographs (within the Smith College Museum of Art) owns a fine collection of this suite, originally acquired in the 1950s. These images capture the colonial opulence and appeal to consumerism so prevalent in the displays at the Crystal Palace. Furs, swords, stuffed animals, textiles – all displayed in neat geographic categories, marked with red pennants stating each country's name in English. While all the Dickinson lithographs are rife with the subtext of consumption and colonial resource mining, the lithograph depicting the Caribbean islands, entitled "Colonial Produce," provides a particularly good example for analyzing colonialism within the world's fair.

Much like its sister prints, "Colonial Produce" shows the interior of the Crystal Palace, its modern glass and steel ceiling on view. The picture plane is filled with tables exhibiting the finest foods hailing from Trinidad and the Bahamas. In the right hand foreground there is a large, multi-leveled display table laden with countless bags of coffee (or possibly tea) for guests to try. Fruit and sugarcane are stacked nearby; a bounty of new flavors waiting for a taste. There are several well-dressed white European patrons viewing the display, as well as a Black woman nearest to the coffee display. She is (especially in comparison to the finest fashions around her) plainly dressed in a simple dress, apron, and kerchief tied around her hair. She holds the hands of two small, elegantly dressed white children who have come to consume the contents of the exhibition. While it is unknown whether she is Black British or an immigrant from a colonized nation, this woman is nevertheless attending an event that centers around the subjugation, exploitation, and commodification of non-white cultures and peoples. She, too, is consumed by the colonial machine; her labor as a childcare provider to a European family has brought her here. A palace filled with the Other, and a clear, systematic distinction between the European normative and the colonized divergent. While it is highly unlikely that the Dickinson brothers included her to press upon a point of anti-racism, her presence nonetheless disrupts the aura of whiteness that permeates a room full of "colonial produce."

Several of the prints in this suite show the Crystal Palace as a multi-level complex, with exhibitions of the colonies stacking on top of each other, allowing patrons to mill about several floors of exotified intrigue. Some even peer over the edge of the balcony, surveying the fair from a bird's eye view. This architectural juxtaposition of a multi-storied building with visual access points from one floor onto another allows the crowd (and the objects on display) to be surveyed from above. A power structure in the visual plane. Prita Meier, in her 2016 book Swahili Port Cities: The Architecture of Elsewhere, writes about the colonial approach to open, multi-leveled architecture. Meier cites the House of Wonders in Zanzibar, built by the third Busaidi sultan Seyyid Barghash in the late nineteenth century, as a key example of colonial architecture finding roots in the colonies. She writes: "[Barghash] introduced the concept of 'presentation' architecture, where much if not all of the structure was dedicated to orchestrating a public experience, especially for visitors from abroad." The House of Wonders is strikingly similar to the Crystal Palace. Built thirty years after the colonial exhibition, it included halls full of foreign-made consumer goods, including a large display of English cast iron fencing. Barghash's choice to emphasize international trade out of Zanzibar's ports was a signifier of his eagerness to engage with colonial power structures in order to gain wealth, prestige, and global respect. By building the House of Wonders in Zanzibar, Barghash created an architectural mirror to the world's fairs of Europe; an African palace with a distinctly dissonant mimesis of European visual culture and colonial values. However, the representation of non-European cultures in the fairs was far from the House of Wonder's interest in global aesthetics and trade. African and Asian cultures were degraded and misrepresented as novelties, exotic luxuries, or artifacts of an inherently "lower" culture. The fact that colonialism rests upon a racist power structure, which denigrates the colonized culture, is undeniable. However, much of the colonial impulse to plunder found its roots in an eagerness to exploit the natural resources of colonized geographies. Consumption is a key element of the colonial project, and the Dickinson print cements this in their record of the fair, ready to be circulated and preserved among the colonial sphere.