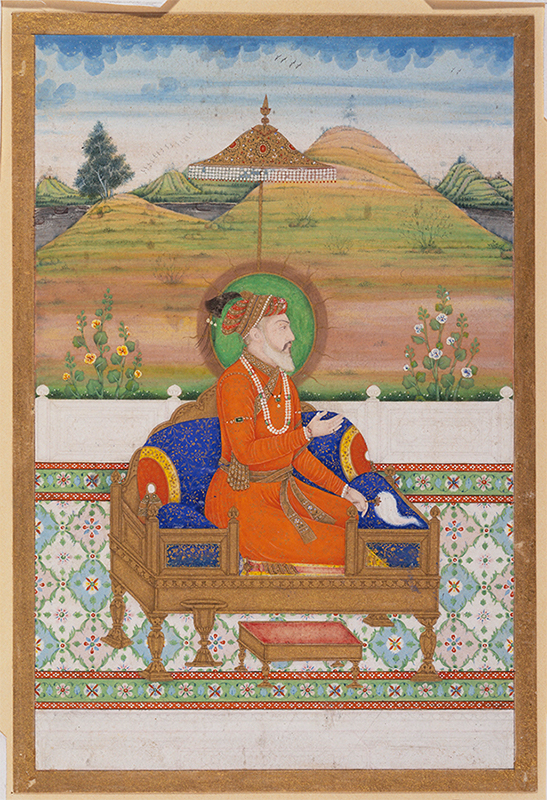 What Does It Mean for a Painting To Be "Mughal?"

In this blog post, Shreya Dwibedy ‘22, discusses questions raised by museum database categorization. During her year-long internship with SCMA’s Jane Chace Carroll Curator of Asian Art, Yao Wu, Shreya has been working on the planning of an upcoming Indian and Iranian painting exhibition.

The Mughal Empire occupied much of the Indian subcontinent from the 16th to 19th century. An empire encompasses both a geographic area and time period, and has its own cultural norms. Many famous buildings of the Mughal Empire remain in India today, such as the Taj Mahal or the Red Fort, both commissioned by Emperor Shah Jahan (pictured below).

This portrait of Mughal Emperor Shah Jahan is one of many in our Indian and Iranian painting collection. In recent years, research done at the SCMA has changed what we know about some of the items in the collection. Part of my curatorial internship at the SCMA this year is to comb through this new information and update the collection records. Since we are reviewing information and adding additional research to a complete group of around 100 objects, it was also a great opportunity to standardize the placement of information in the collection database. Not only should we have a clear understanding of the descriptor “Mughal,” but this information should be communicated to visitors at the museum and users of the online collections. The collection database organizes information on thousands of objects in the collection into one central location for easy access. Museums serve as a resource to the public, so making records accessible through clearly defined categories is extremely important. Some of the categories in our database include Maker Culture, Place Made, or Date Made.

Maker Culture describes a particular cultural or regional group, Place Made identifies a location, and Date Made typically contains a year or range of years.

While looking over the records,  I noticed that some paintings originating from the same date ranges or culture were identified as Mughal and others were not, so how do we know if a painting is “Mughal?”

For example, both of these paintings were created in the late 18th century and contain very similar subject matter: princesses on terraces with musicians. Both paintings were made in India, however, Two Women Embrace on a Terrace was made in Delhi and Princess with Attendant and Musician was made in Rajasthan, yet, only Two Women is identified as a Mughal painting.

Both Delhi and Rajasthan were part of the Mughal Empire at one point in time, however, the borders of the empire changed dramatically over the course of a few hundred years. We often associate the Mughal empire with its peak, when its territory encompassed most of the Indian subcontinent. By the mid to late 18th century, the empire shrunk significantly and Rajasthan was no longer under Mughal rule.

Although both paintings may look similar at first glance, adding specificity to the categories indicates to the viewer to look closer at the style or differences in the two painting traditions.

Another interesting example in the collection is this painting Durga Battling Demons identified as ‘possibly Mughal.’ Locations often have particular styles of painting and this painting of Durga is identified by its ‘Mughalized’ depiction of the Goddess. Durga is a Hindu Goddess, but in this scene she is battling Persian demons (divs) rather than Hindu demons (rakshasas). It’s likely this was taken from a Persian translation of the story, which was a common occurrence in the Mughal Empire.

For a painting to be identified as Mughal, it would likely have to fit the parameters of a specific place during a specific date range, while also fitting a particular style associated with the Mughal Court. So how do we categorize “Mughal?”

The problem with a descriptor like “Mughal,” is that it is its own culture, and exists in a specific location, in a particular period of time. To an extent, choosing the proper category for this descriptor is subjective, especially if the category in the database is supposed to give the clearest possible information to the visitor. Some art museums place “Mughal” in the Place Made category. Other museums place the descriptor in the Date Made, Style, Period, or Maker Culture category. A few museums choose to place “Mughal” in all of these categories.

Museum records are often updated throughout the years by many different people. As a result, these records may not be consistent. Especially when making the transition to new record keeping systems over the years, conventions change and information gets lost. Of course, new discoveries on objects could add more detail or change what we previously identified in a painting. The collections database is a work in progress and Mughal paintings are just one example of the nuances in the system.