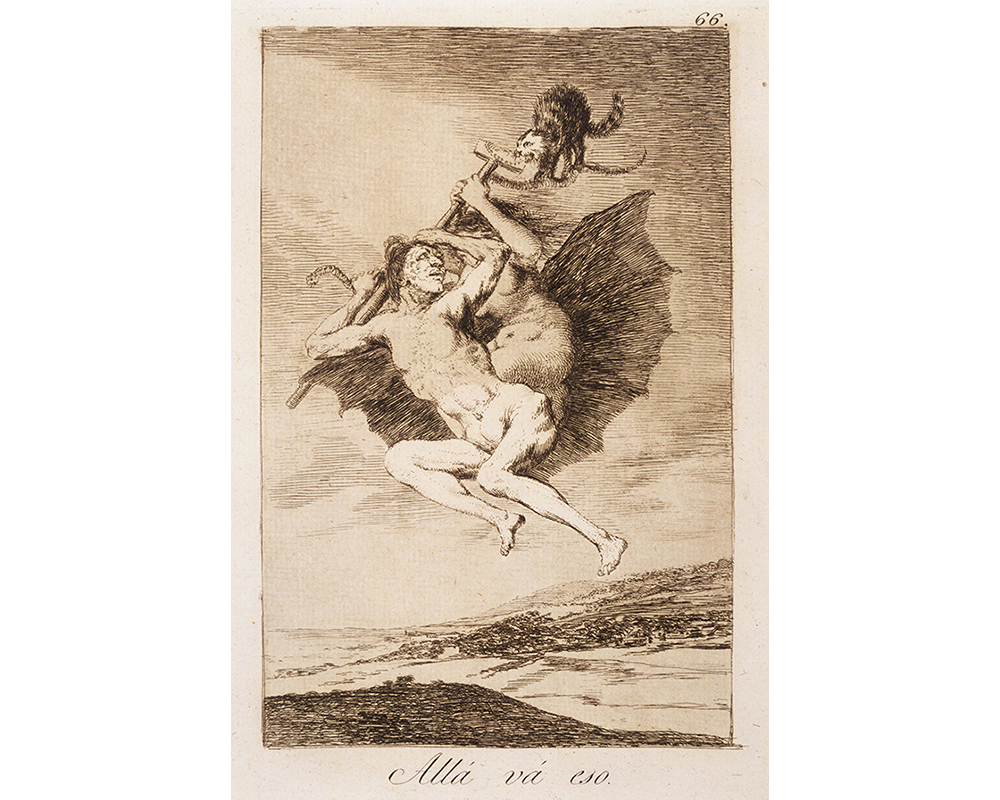 Harper Davenport is working as a summer student assistant at the Cunningham Center for Prints, Drawings, and Photographs. She is an art history major and member of the class of 2021.

As a student assistant in the Cunningham Center I have the opportunity to work hands-on with the collection. I came across the Los Caprichos prints by Goya in storage and was struck by their bizarre and grotesque nature and was interested in why Goya used this specific imagery.

Francisco Jose de Goya y Lucientes was born March 30, 1746 in Aragon, Spain. He began studying painting at the age of 14 under Jose Luzan y Martinez and later Anton Raphael Mengs. In 1786 he became a painter for the Spanish court serving under Charles III and Charles IV. Goya suffered from an unknown illness in 1793 which caused him to lose his hearing. After this, his work became darker and more disturbing in its subject matter. In 1799 he published a series of 80 prints titled Los Caprichos. In this series, Goya explores the state of the world around him. He uses satire to comment on what he saw as the folly of mankind. I was particularly interested in Goya’s depiction of witches in Los Caprichos. While Goya himself did not believe in the existence of witches, the general public did. Therefore, Goya used images of witches in his work to reflect the evil he saw plaguing society. The perception of witches and witchcraft at this time stood in direct opposition to the values of the church. However, it was often clergy members that were depicted in these horrific scenes as Goya saw the church as a source of corruption and evil in society. He portrayed the perils of ignorance and superstition by casting individuals in the roles of witches or demons performing evil acts.

The witches in Los Caprichos are identifiable by their old age and several symbols of evil and sin that are often pictured alongside them. They are in flight in many of the prints, often with a broom between their legs. Flying was seen as a symbol of lechery and sin. Similarly, cats, who have often been depicted as companions to witches, are a symbol of female seduction and also feature in many prints from this series. Owls are another symbol often found in these prints. Though they were thought to be ill-omens and symbols of darkness and ignorance in Goya’s time, they have also been traditionally associated with Athena, the Greek goddess of wisdom. It is said that an owl sat on her blind side allowing her to see all and to see truth. While Goya’s inclusion of owls is certainly a reference to their association with witchcraft, they may also symbolize the truth that Goya feels he is revealing in Los Caprichos. 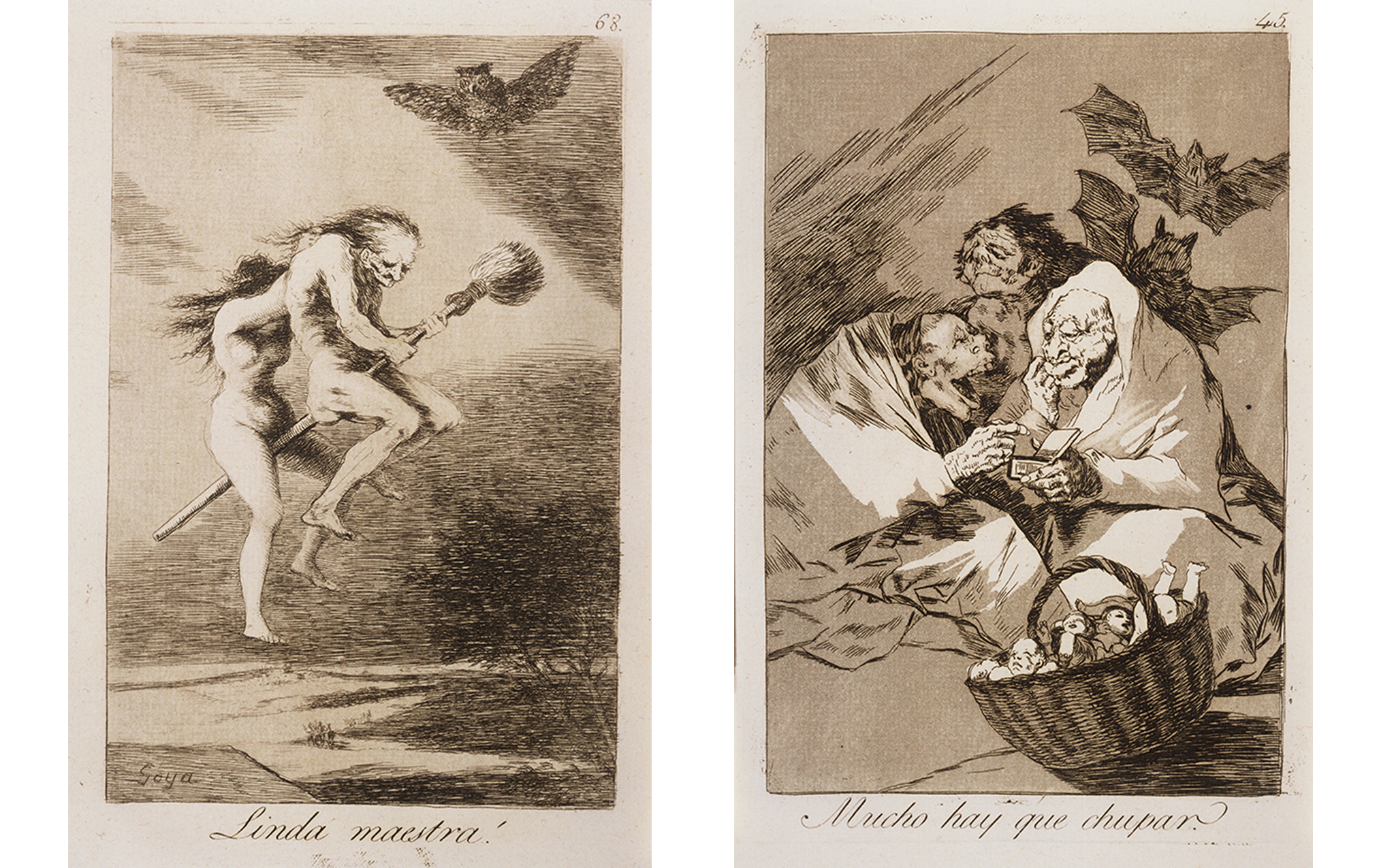 One disturbing element found in many of the prints depicting witchcraft is the abuse and cannibalism of babies by the witches. They can be seen in plates 44, 45, 47. No scholarly work has been done to identify the meaning behind this particular use of babies. However, it is likely a commentary on the abuse of children, often by the church, who are some of the most vulnerable members of society. Another possible explanation is that at this time it was thought that unbaptized children were more susceptible to being victimized by witches and be used as sacrifices. 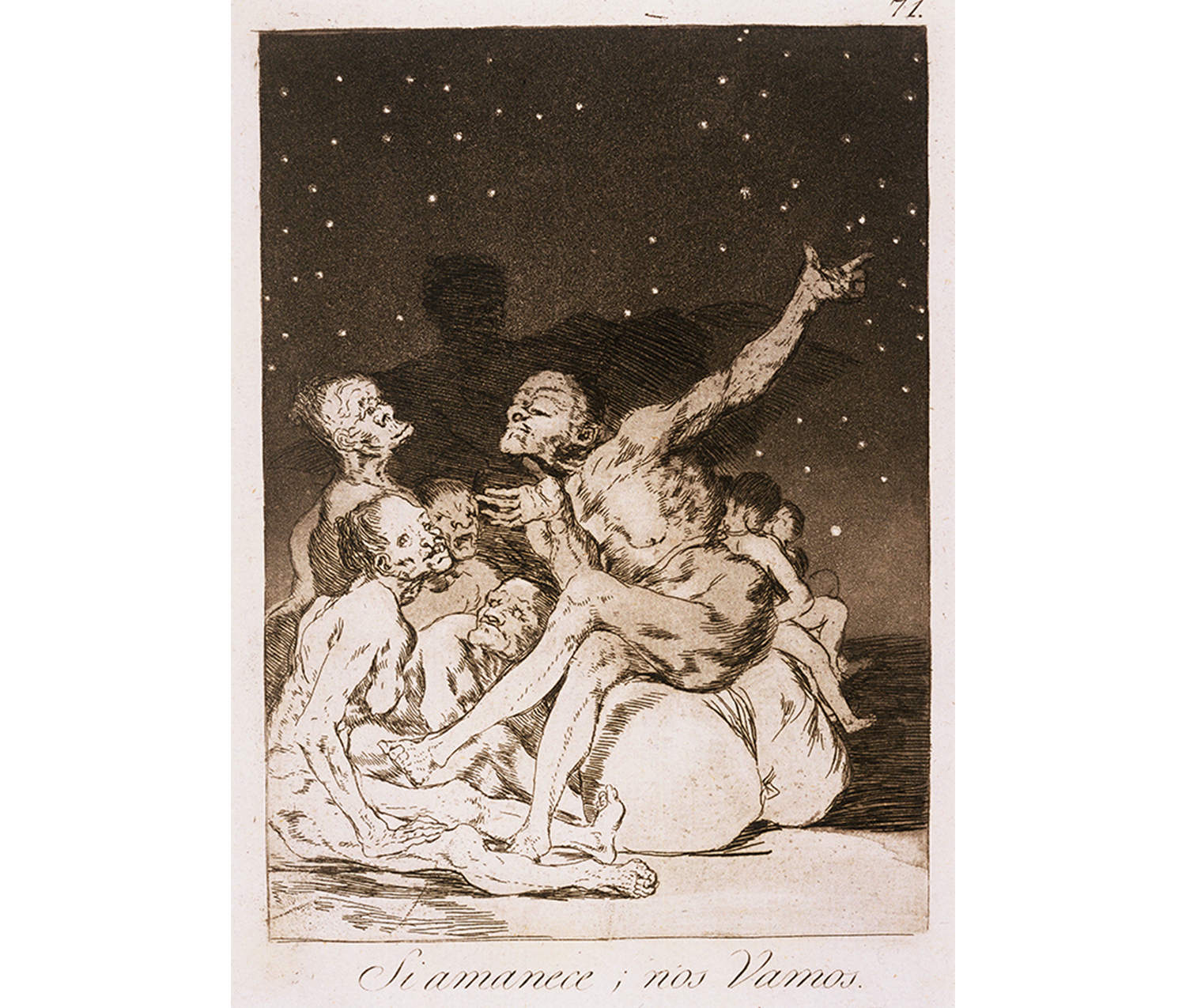 Goya created Los Caprichos using the aquatint technique which creates a strong contrast between light and dark which further emphasizes the dark and ominous nature of these prints. The aquatint plates degrade quickly and therefore only the first few editions of these prints have this striking contrast. Luckily most of the Los Caprichos prints in the SCMA collection are first editions. The darkness that shrouds the witches in Los Caprichos represents the lack of enlightenment that Goya felt plagued society. In plate 71, the witches are huddled together with their belongings wrapped in a rucksack preparing to flee because dawn is approaching -- and with the dawn comes light, and thus enlightenment.

Los Caprichos is an excellent example of an artist using their work to comment on and critique the morals of the world in which they live. Throughout these prints, Goya used the superstitions at the time to show that the real threat to society is not demons or witches but our own ignorance.