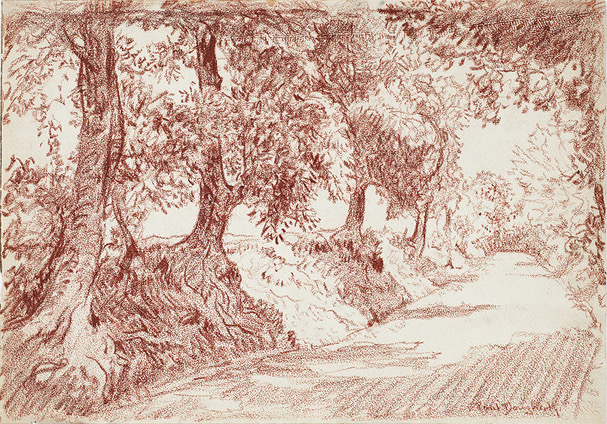 Guest blogger Sarah Ducharme is former Cunningham Study Center student assistant, East Asian Studies major, and member of the class of 2021. This is the second in a series of posts reflecting on the relationship between human beings and the natural environment.

Paul Dougherty's Road Through Trees in Sunlight takes the human-environmental relationship to early 20th century America. The Romantic, spreading to the United States, took to a new environment, adopting new representations as human exceptionalism spread. In Dougherty's time, the sublime was faltering. Nature was losing its domination. Where nature had once subdued humanity, humanity was subduing nature, although the human landscape was not yet dominant.

Dougherty's piece captures the peaceful coexistence of the human and the natural within nature's habitat. A road, man-made, cuts through a forest. Yet, not paved, the road is a part of the natural landscape. Here, humanity is a part of the natural landscape. As in Crome's piece, trees loom over the man-made structure, hinting that it may "take back" that which humanity has claimed. And yet, this is not a threat. Nature, occupying the positive space of the piece, yields to this new element in the negative -- yet all the same, envelops it. It is an opening of acceptance for what may (what will) come of this coexistence. All roads lead somewhere, and this one appears to lead to a future human domination of the natural landscape.

In this suggestion, a conflict appears within the piece. A gentle tension ties the human and the natural in this moment of warmth. It is a cordial tug-of-war found in their intertwining forms. The soft organic curves create the forest are cut through by the rigid line of the road, the only geometric feature to be found in the piece. The contrast of organic and geometric brings into question the compatibility of these two forces within this landscape. While at first the forest appears to envelop the road, accepting the anthropogenic alteration within its bounds, the potential in the form of the road argues otherwise.

Nature may overtake the road, but the potential of the road persists. Once paved, it will solidify human domination of the natural landscape. Yet in the moment, the fate of the landscape hangs in the coexistence of competition.