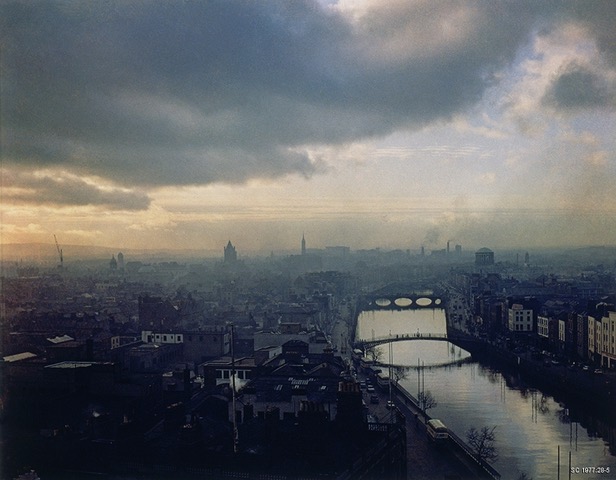 The Sublime in the Mundane

Guest blogger Sarah Ducharme is former Cunningham Study Center student assistant, East Asian Studies major, and member of the class of 2021. This is the final post in a series reflecting on the relationship between human beings and the natural environment.

Thus far, I have explored the subtle depictions of human-environmental interactions in nineteenth and early twentieth century, periods of vast industrial growth, through two prints and a drawing depicting the interplay between these two forces within nature. Under the reach of Romanticism, I find a sense of the sublime emanating from these three pieces (at least, my own emotional reaction to them is that of a rush of the sublime). Yet, in the nineteenth and early twentieth centuries, the sublime was already on the decline. In the shadow of industrialization, nature ceded itself to humanity — that, or humanity encroached on nature so that it disappeared. Given the trajectory of human development, many argue that the sublime can no longer exist in an industrial or post-industrial world. I too, agreed. What beauty, what moving power is in nature crushed under the weight of human encroachment? And in its stead, what has an urban landscape to offer?

In my reaction to Albert Barkin’s November Sunlight, I saw the only place for the sublime  in the modern world was that in which the tragedy of encroachment is most visible, in the supplanting of nature with the manmade. I recently, however, came across a photograph that presents a convincing argument for the sublime in the modern landscape: Evelyn Hofer’s Dublin Sky.

Hofer’s 1966 photograph depicts a distinctly modern landscape with not a natural element to be found beyond the air of the sky. Like November Sunlight, it shows a tragic usurpation, though at first I was not struck with such a feeling of melancholy as I felt upon looking at the beautiful calm of the former. It may be the principle of positive aesthetics. I can see a solitary house in a barren landscape as tragically beautiful, a powerful presentation of human-environmental relations, but in a city I intrinsically find ugliness in a lack of nature. I would not expect a cityscape to instill a feeling of the sublime. For one, it is fully man-made; while we can not expect nature, we can expect ourselves. Yet all the same, Hofer’s cityscape strikes me with the sublime in the mundane.

The city is everyday. It is the new natural. Occupying the space that would otherwise be the natural landscape, it plays off of the remaining feature of nature, the sky. Hofer’s piece gives equal space to both the natural and the human, although here it is the human which occupies the whole of the positive space, flanked by nature in the negative. The warmth of the sky gives the piece its sublime quality as it blankets the modern human landscape. At once, its warm colors support, while its looming clouds pose a conflict. And yet they are one, both the human and the natural, as the human landscape continues to encroach. Though structural encroachment, now the norm, is exceeded. A haze of pollutants hover on the horizon between the human and the natural forces, tying them together in a new interconnectedness. At the expense of nature, this interconnectedness is mundane. Yet in this everydayness, it is striking. Looking at this piece I see that although once could claim that the sublime is lost in the modern world, photography, in preserving a particular state of interaction between the human and the natural, can argue the sublime in the human usurpation of nature.

1. Introduction: The Sublime in the Mundane: Human Encroachment in the Natural Landscape
2. On The Threshold
3. Enveloped Encroachment
4. Melancholy Dominance